Futures on the S&P 500, Dow and NASDAQ 100 dropped with European stocks this morning after a key revenue forecast cut from semiconductor heavyweight Texas Instruments (NASDAQ:TXN) sounded a dire warning about the state of the global economy, spreading pessimism to European technology firms, already battered by Brexit worries.

Dow and NASDAQ contracts hit the lowest price since Oct. 10, though they later bounced off their lows.

The STOXX 600 was pulled lower by a global chip shares selloff after Texas Instruments, which sells to a broad range of sectors, delivered a fourth-quarter forecast 10% below the low-end of analyst expectations on Tuesday, while also missing both earnings and revenue forecasts.

Swiss industrial giant ABB (SIX:ABBN) also added to economic fears after signaling a critical slowdown in its two main markets—China and the U.S., with order intake from the latter turning negative. The group’s shares still managed to rise after third-quarter profits contracted less than expected.

The European benchmark's technical support coincides with the geopolitical limbo traders find themselves in, after British Prime Minister Boris Johnson saw his Brexit withdrawal bill rejected by Parliament, which in turn quashed hopes to implement an orderly Brexit by the Oct. 31 deadline. Bets are now open on whether European negotiators will grant Johnson an extension on the bill to avert either a no-deal Brexit or snap U.K. general elections. 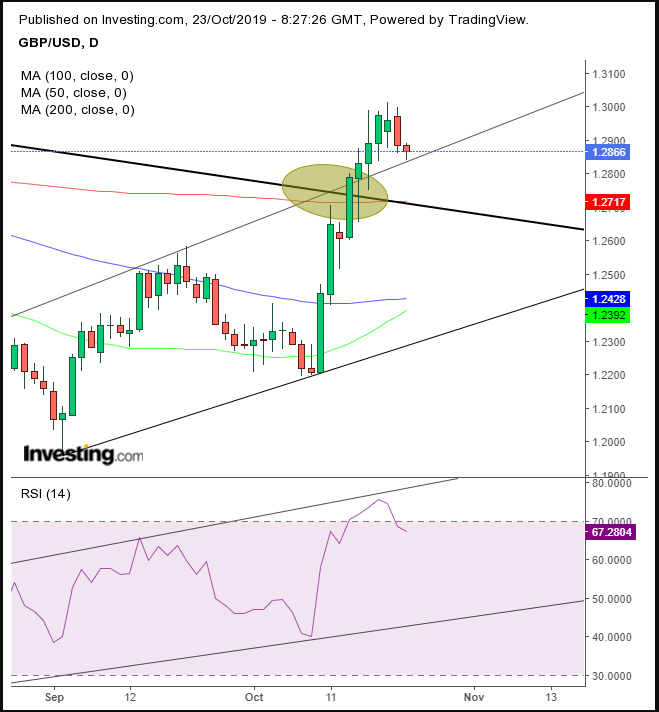 The pound recovered slightly from the lows of its second-day slump, after finding support above the top of its former rising channel.

In the earlier Asian session, most regional equities took their cue from U.S. markets after some large companies reported mixed earnings. Hong Kong’s Hang Seng (-0.82%) edged lower for the fourth straight day, with Tencent Holdings (HK:0700) (-2.32%) and insurance company AIA Group (HK:1299) (-0.73%) weighing on the average—the latter poised to complete the right shoulder of an H&S top, following a death cross. The selloff followed a report in the Financial Times about a Chinese government plan to replace the city's Chief Executive Carrie Lam. 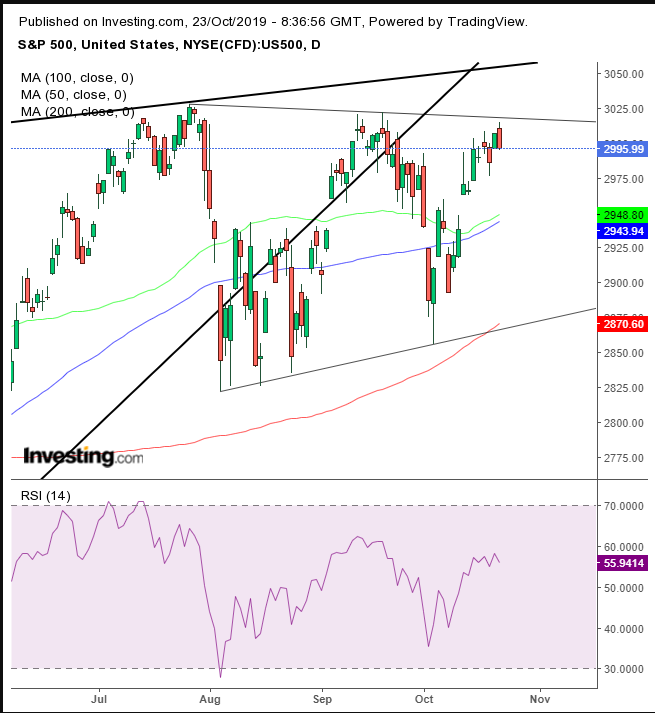 Technically, on the S&P 500 chart, demand is finding resistance by oversupply at the top of a triangle formation, developed below the top of a long-term broadening pattern since January 2018. 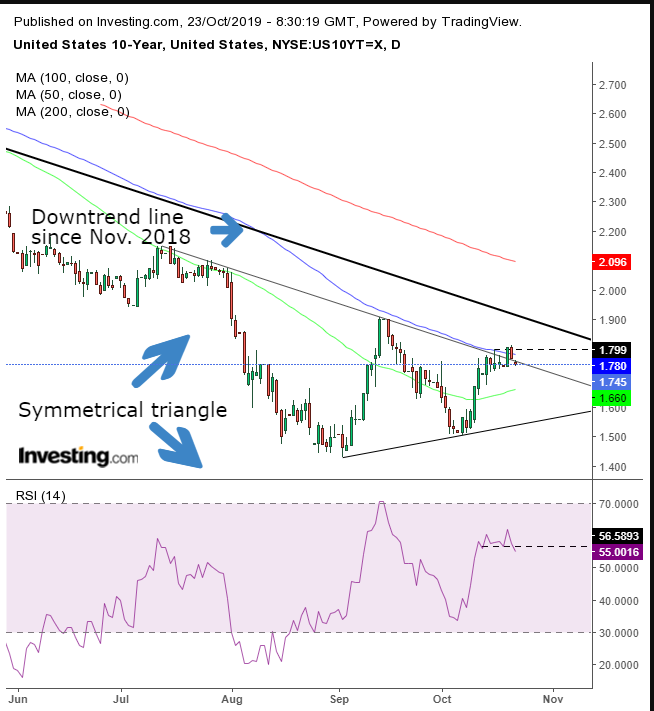 Meanwhile, yields on 10-year Treasurys slid, returning into a symmetrical triangle, occurring below their long-term downtrend line since November 2018. The RSI is topping out, suggesting rates might retest the bottom of the triangle in an effort to breakout according to the long-term downtrend.

The dollar remained well above the 200 DMA after it managed to climb back over it. Earlier, the greenback had slipped lower for four straight sessions, breaking below a rising channel since mid June.

Gold climbed for the second day but still within a narrow, 1% congestion since Oct. 11.