TOKYO (Reuters) - Asian shares slumped on Tuesday as fears about a drawn out Sino-U.S. trade war, protests in Hong Kong and a crash in Argentina's peso currency drove investors to safe harbours like bonds, gold, and the Japanese yen.

"The protests in Hong Kong are negative for stocks, which were already in an adjustment phase because there is talk that the trade war will trigger a recession," said Kiyoshi Ishigane, chief fund manager at Mitsubishi UFJ Kokusai Asset Management Co.

Hong Kong's airport, the world's busiest cargo airport, reopened on Tuesday, which could ease some concern about the immediate economic impact of protests over the past two months.

The protests began in opposition to a bill allowing extraditions to mainland China but have quickly morphed into the biggest challenge to China's authority over the city since it took Hong Kong back from Britain in 1997.

Japan's Nikkei (N225) was also hit hard, down a sharp 1.5% and on course for its biggest daily decline in a week.

U.S. stock futures were 0.13% higher in Asia, but that did little to ease the mood.

Stocks in Singapore (STI) shed 1.1% to reach their lowest since June 6 after the government slashed its full-year economic growth forecasts. The city state is often seen as a bellwether for global growth because of its importance as a key trade hub.

The selling in regional markets came as Wall Street stocks took a beating on Monday, with the S&P 500 (SPX) losing 1.23%.

Sentiment was already weak due to increasing signs that the United States and China will not quickly resolve their year-long trade war. Markets were hit with further turbulence after protesters managed to close down Hong Kong's airport on Monday.

Traders were also on edge after market-friendly Argentine President Mauricio Macri suffered a mauling in presidential primaries, increasing the risk of a return to interventionist economic policies.

Benchmark 10-year Treasury yields were near the lowest in almost three years, gold was pinned close to six-year highs, and the yen was within a whisker of a seven-month peak versus the dollar in a sign of the heightened anxiety in financial markets already battered by global growth woes.

"Long-term rates will continue to fall, and stocks will adjust lower, but this is temporary. Major central banks are cutting rates, which will eventually provide economic support," Mitsubishi UFJ's Ishigane said.

Analysts said that trading could be subdued as many investors are off for summer holidays. Yet, there was no shortage of gloomy news for investors looking to catch their breath from several months of market ructions.

The Argentine peso collapsed overnight, falling to 55.85 to the dollar, after voters snubbed Macri by giving the opposition a surprisingly bigger-than-expected victory in Sunday's primary election.

The Merval stock index (MERV) crashed 30% and declines of between 18-20 cents in Argentina's benchmark 10-year bonds left them trading at around 60 cents on the dollar or even lower.

Refinitiv data showed Argentine stocks, bonds and the peso had not recorded this kind of simultaneous fall since the South American country's 2001 economic crisis and debt default.

The grim backdrop was enough to push investors into safe-havens, and U.S. Treasury yields dropped across the board on Monday as trade worries and political tensions supported safe-haven assets.

The yen last fetched 105.37 per dollar, and was within striking distance of 105.03, its strongest since the January 3 flash crash.

The Swiss franc, which along with the yen is considered a safe haven in times of trouble, traded at 0.9697 per dollar , near its highest in a year. 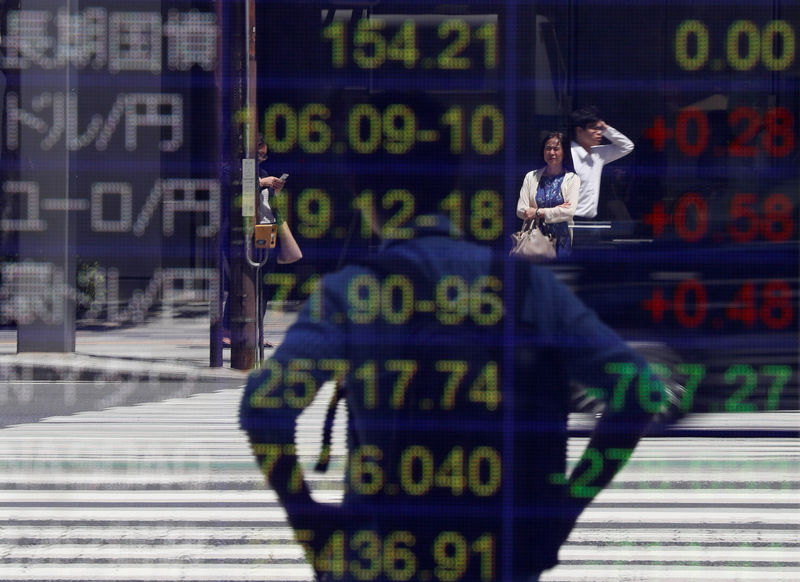