Futures on the S&P 500, Dow and NASDAQ 100 jumped with global stocks and Treasury yields this morning after U.S. President Donald Trump dismissed recession warnings and struck a positive tone on trade negotiations. Global stimulus signals also helped markets higher, ahead of a Fedspeak-filled week that may shed more light on the U.S. central bank's willingness to further ease its rate policy. 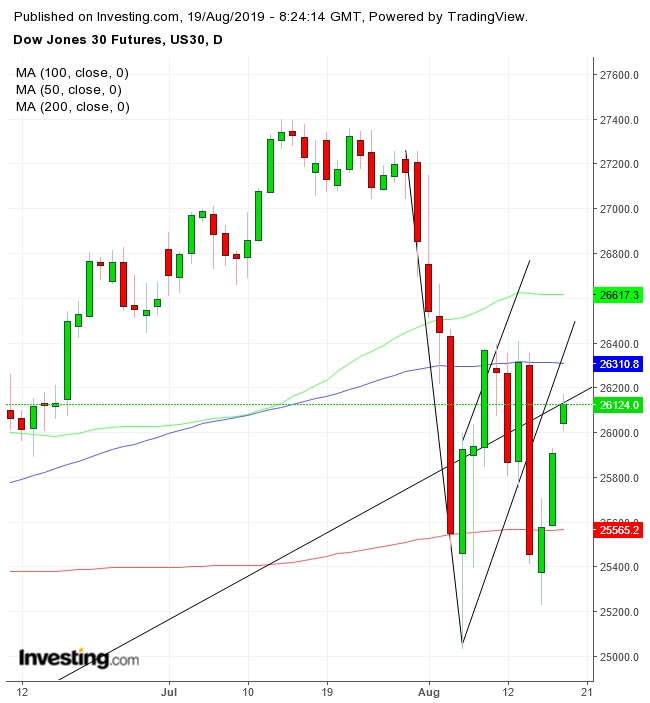 Contracts on the Dow Jones gained about 0.85% in the early European session—from a technical perspective, however, that merely marked a return move after they completed a rising flag, bearish after the near 8% plunge over six days in early August.

The STOXX 600 leaped forward with the German DAX, which was propelled higher by Deutsche Bank (DE:DBKGn), amid reports the group's supervisory board chairman Paul Achleitner will step down before his due term.

The U.K.'s FTSE 100 surged toward 1.00 after opening 0.75% higher, boosted by energy stocks after a Yemeni separatists' attack on a Saudi oil facility spurred oil prices higher.

Regional shares also took their cue from Friday’s U.S. equity charge as investors navigated President Donald Trump’s trade rhetoric: on the one hand he showed some willingness to resume talks with China; on the other, he questioned reports that the Commerce Department will extend a reprieve given to Huawei Technologies to do business in the U.S..

However, what really pushed U.S. shares higher on Friday were stimulus hopes from Germany, the European Central Bank and China—though these tailwinds fell short of sparing stocks from a third consecutive weekly loss, amid heightened levels of volatility. 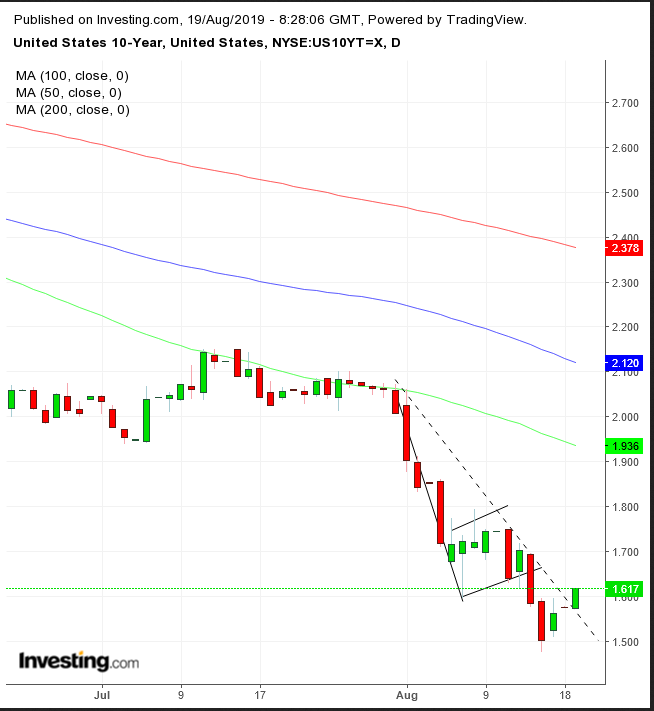 The yield on 10-year Treasurys rallied ahead of bond auctions, as stimulus hopes prompted investors to rotate out of debt and into equities—outpacing the driver of a lower interest rates outlook. Technically, yields crossed the downtrend line this month amid a return move to a completed bearish flag—similarly to what seen in the Dow futures chart above. 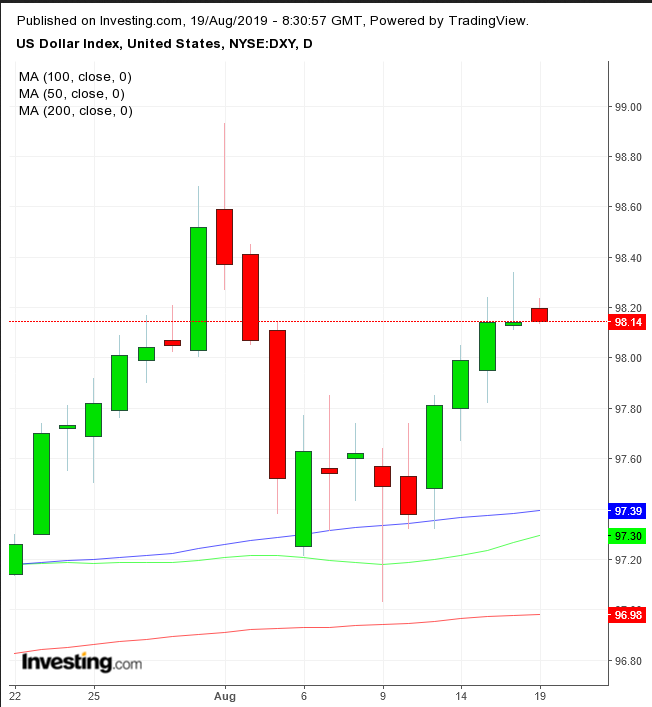 The dollar was little changed, paring an earlier advance, after reaching the highest level since May 2017. Technically, the greenback may have found resistance after Friday's—extremely—upper-shadowed shooting star, which challenged a high to beat the Aug.1 peak. 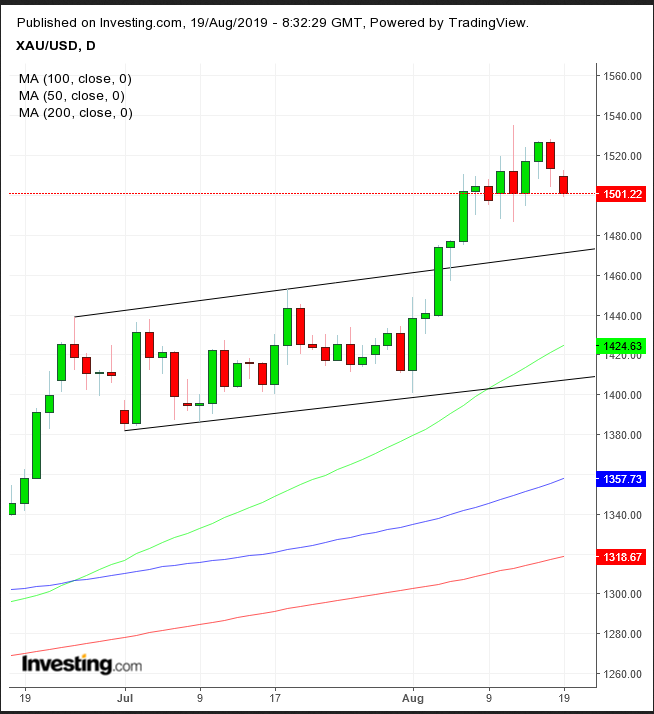 Gold dropped for a second session despite the flat USD. Technically, the yellow metal is pulling back toward the rising channel top it broke two weeks ago. 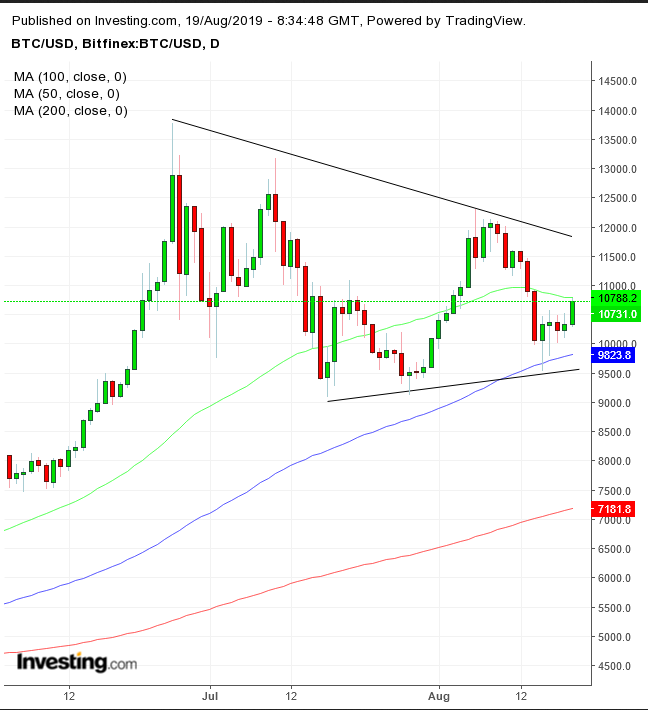 Bitcoin continued to defy its safe-haven status as it advanced on a risk-on day. Technically, it is extending a rally after bouncing off the bottom of a symmetrical triangle consolidation.

Oil climbed for a second day after the Saudi oil field attack, and on hopes global stimulus would boost fuel demand. Technically, however, we consider it just a short upward correction before WTI resumes its downtrend along a falling channel. The price already pared session highs for the second straight day below the 200 DMA.