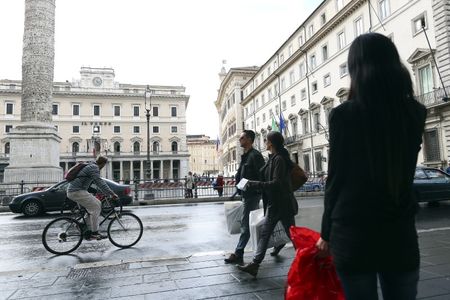 Investing.com -- Italy’s stock market got its mojo back on Wednesday after investors took the view that the latest political crisis may not lead inevitably to the broader European one that many fear.

The FTSE MIB led Europe’s markets higher after early trading, rising 1.4% to a two-week high after the resignation of Prime Minister Giuseppe Conte left the country temporarily without a government.

Other markets followed Italy higher after a report that the German government had agreed a draft law largely scrapping the so-called “Solidarity Surcharge” on income tax. That’s Berlin’s biggest move yet to support an economy that is slowing down under a combination of trade-related pressures. The so-called "Soli" generated nearly 20 billion euros for the government last year.

President Sergio Mattarella will now conduct two days of talks with the various parties in parliament to see if another majority can be formed. If not, his choices effectively boil down to either calling new elections, or installing a government of technocrats to oversee the passage of a budget for 2020, before calling elections in the spring.

The latter is the likelier option, says Florian Hense, an economist with Berenberg Bank in Berlin. That’s because it means the technocrats, rather than any of the country’s biggest parties, will be saddled with the unpopular task of finding 20 billion euros in savings in the next budget. Under legislation already in place, if those savings aren’t found, then a 3 percentage point increase in value added tax will come into force.

Hense puts a 50% chance on the above scenario. The second-most likely scenario, he says, would be of the 5 Stars Movement patching up its differences with the center-left Democratic Party and agreeing to form a new government.

Either of those would put off what the market fears most - snap elections which put the right-wing populist Lega party of Matteo Salvini in power, either on its own or with other like-minded anti-immigrant and Euroskeptic parties.

“The stronger Salvini would be, the noisier the conflict with the EU over the 2020 budget could become, Hense said in a note to clients, adding that this could cause a fresh surge in bond yields.

“To avoid a major confrontation with the EU and keep bond yields at affordable levels, Salvini would have to perform a major U-turn,” Hense argued in a note to clients.

Gains in the bond markets have, as usual helped bank stocks since Conte’s speech. Intesa Sanpaolo (MI:ISP) was up 1.3%, while Unicredit (MI:CRDI) was up 1.4%. However, the biggest gains were among smaller names, widely perceived as weaker than the big two. UBI Banca (MI:UBI) was up 2.6%, while Banco Bpm (MI:BAMI) was up 1.9% and Mediobanca (MI:MDBI) up 1.8%.

However, the biggest gains had little to do with politics: Fiat Chrysler rose 3.8% and the Agnelli family holding company Exor rose 3.3% on the back of a report suggesting that the company is still talking to France’s Renault (PA:RENA) about a prospective merger.