3 Cannabis Stocks Down Since Q4 Earnings, But Don't Count Them Out Just Yet

3 Cannabis Stocks Down Since Q4 Earnings, But Don't Count Them Out Just Yet

What a difference a few weeks can make in the weed business. Over the past 14 days, three prominent players in the cannabis space, Tilray (NASDAQ:TLRY), Cronos Group (NASDAQ:CRON), (TO:CRON), and CannTrust Holdings (NYSE:CTST), (TO:TRST), each reported quarterly earnings.

In the aftermath, their once hot stocks took serious hits. CannTrust in particular, which reported this past Thursday, suffered a serious drubbing that left its shares recovering from a 23% plunge.

Are marijuana stocks simply too volatile for regular investors? Has the promise of legalized cannabis and the businesses it spawned been overstated? And, perhaps most important for those waiting on the sidelines, wondering whether to jump into this emerging sector which has already produced triple-digit gains for some equity investors, is it time to buy the dip?

Before taking a deeper look at the fundamentals of each stock, two key takeaways should be noted:

1. The most recent quarterly earnings reports were the first for the entire period during which marijuana was legal in Canada. This is significant since the black-and-white numbers on a spreadsheet for the past quarter don't tell the full story. Investors—whether current or potential—need to understand that this is newly discovered business territory, one that's endured a far-from-perfect roll-out of the new regulatory framework aimed at structuring the legalization of the product.

2. Investors must keep in focus the environment in which these companies operate. Cannabis is more than just a recreational-use drug. It is a disruptor that has the potential to change markets in several sectors: tobacco, alcoholic beverages, pharmaceuticals, wellness, pet care and a wide range of are simply called edibles—cereals, chocolates, baked goods among them.

So what did we actually learn about the health of these three companies during their Q4 2018 reports?

Since reporting on Monday, March 18, the Canadian firm that's only listed on the NASDAQ saw its shares drop 10.65%, closing last Friday at $65.52 a share. 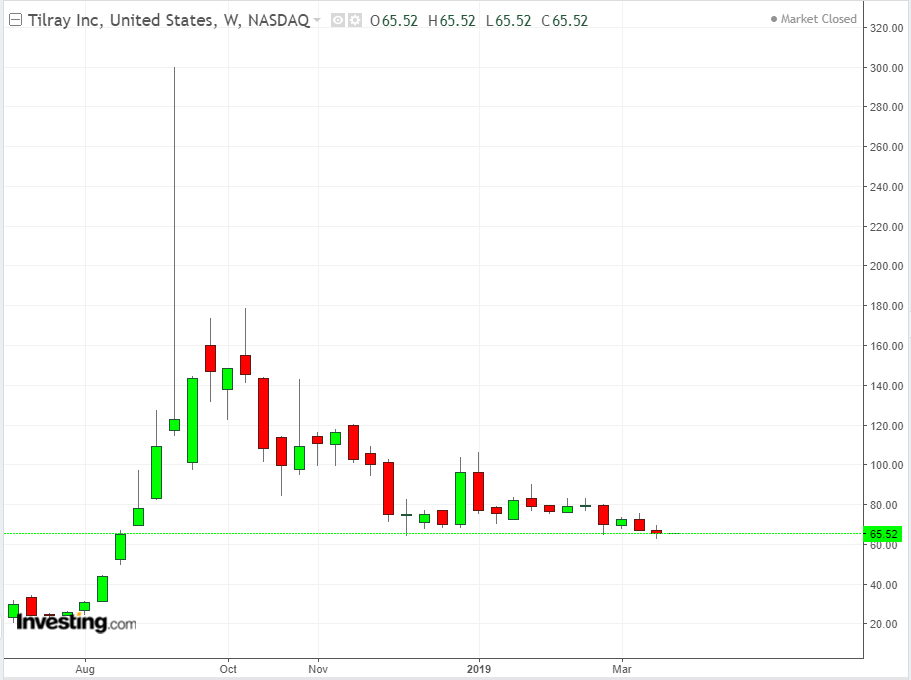 The company reported a 203.8% increase in revenues for the quarter compared to the same period last year. Overall in 2018, revenues were up 110% compared with 2017.

Notwithstanding, its expansion and strategic partnership deals in 2018 were notable: Tilray signed a deal with Sandoz, a division of pharma giant Novartis (NYSE:NVS) to provide increased access to medical cannabis to patients across the globe. It also signed a research and development partnership with Anheuser-Busch Inbev (NYSE:BUD), the world’s largest brewer, to develop non-alcoholic THC and CBD beverages. THC is the element in pot that produces the so-called ‘high,’ while CBD is purported to contain medicinal benefits.

Cronos shares have slipped 9.7% since the company's March 26 report. 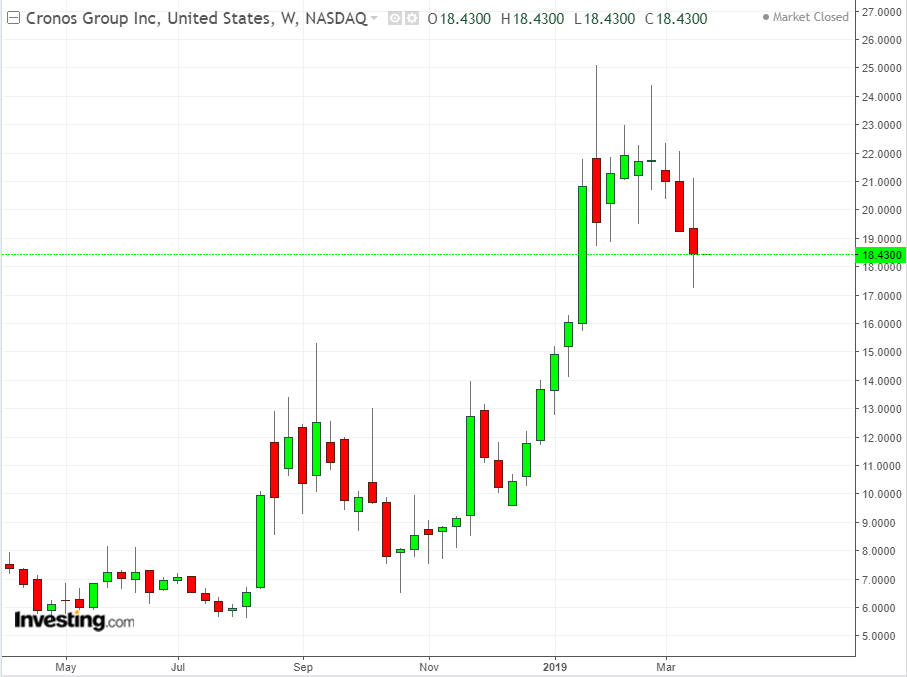 Investors are keeping a keen eye on the company’s performance in the recreational segment of the market. As well, they're watching how successful it may have been at expanding its production capacity. It reported the establishment of new growing facilities and additional joint ventures with companies in Australia and Israel.

Last quarter, Cronos received an infusion of cash as U.S. cigarette-maker Altria Group (NYSE:MO) bought a 45% stake for C$2.4 billion (USD $1.8B) The deal was finalized earlier this month. Altria has the option to acquire an additional 55% stake within four years, which would give it majority control of the company. 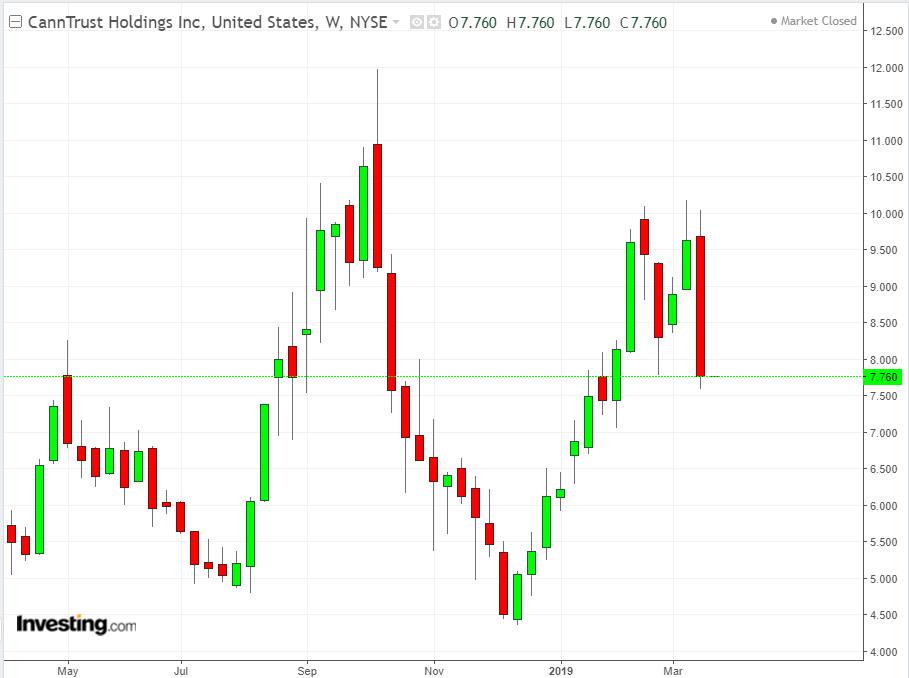 CannTrust reported a 132% jump in revenues, compared with the same period the previous year. But it also recorded a net loss of $25.5 million for the period. That translated into a loss of 26 cents per share compared with the $6.3-million profit—or 8 cents a share—it showed in Q4 2017. Analysts were disappointed, having expected to see a 4-cent-per-share loss.

Among the Q4 2018 highlights: the Ontario-based company graduated to a TSX Composite listing and began trading in the U.S. In addition, CannTrust obtained all necessary permits to continue to expand its indoor growing facilities and secured 200 acres of land on which to develop an outdoor growing operation. The company operates a 430,000-square-foot greenhouse in the Niagara region, one of the largest in North America.

Bottom line for cannabis companies: they're moving quickly on a variety of fronts. While continuing to ramp up production and fill the pipelines for what has already been legalized, they're also looking ahead at the potential in additional areas such as edibles.

Overall, it’s a market that's expected to potentially bring in billions of dollars in profits. And the longer the U.S. refrains from legalizing the substance, the more attractive Canadian companies become for major U.S. players looking to position themselves within the space. As long as the U.S. doesn't legalize the substance at the federal level, the size and scope of this window of opportunity for Canadian players is wide open.