By Gina Chon and Rob Cox

DAVOS, Switzerland (Reuters) - U.S. Treasury Secretary Steven Mnuchin said on Friday that he expects to begin negotiations with China on a so-called Phase 2 trade deal soon, with Washington and Beijing on the same page.

"My guess is they (China) will consider waiving other tariffs as part of their purchasing program," Mnuchin said of the $200 billion (£153 billion) in additional U.S. goods and services that China has pledged to buy.

"I don't see any difference in our views. My expectation is that we'll start conversations on phase two in the near future," he said in an interview at the end of the annual meeting of the World Economic Forum (WEF) in the Swiss ski resort of Davos.

China had a low-key presence at the Davos meeting, with most of the focus on trade concentrated on a dispute between the United States and the European Union over a "digital tax", with Washington threatening retaliation if the bloc's members tax U.S. based companies before an apparent compromise was reached.

"Once there is a consensus, those tax changes need to be implemented and in many places, require legislation. We object to a tax that targets just American companies," Mnuchin said.

With chief executives representing many of the biggest companies from around the world at Davos, it is often used as a barometer of business confidence and the economic outlook.

"It seems like Europe and Asia have bottomed and the U.S. still looks in very good shape. So there's a lot of positive attitudes," Mnuchin said, with U.S. tax cuts in prospect.

"My expectation is that the focus of tax cuts will be for the middle class and some pro-growth incentives," he added.

The biggest battleground during the four-day event has been the debate over how politicians and business leaders should tackle climate change, with much of the focus on exchanges between U.S. President Donald Trump and activist Greta Thunberg.

This year's WEF included a contingent of young activists like Thunberg, with the organisers keen to add to the voices engaging in debate at the exclusive event.

"I was at dinner last night and people were very focused on the climate issue. My comment was, look we're in the middle of a serious health issue in China. It was not a topic of discussion until I brought it up," Mnuchin said.

"The environment is important. I just think it should be put in context. This goes back to a little bit of communication. The youth have focused on this one issue.  But there are many other important issues that will impact the next generation."

One possibility, Mnuchin said, was to change the lexicon.

"Perhaps the historical language that we use, we need to reconsider. When young people hear capitalism, perhaps it has a different meaning to them," Mnuchin said.

"Perhaps the language we should be using is free markets versus managed markets. Open society versus closed society."

Addressing the use of sanctions by the United States, Mnuchin said it was a strategy that needed scrutiny because of the potential impact it could have on the U.S. dollar.

"Sanctions are up dramatically. Over a very long period of time, we have to be careful in how we use these, where it could impact the use of the dollar. So we take that responsibility very seriously," he said.

Mnuchin is also looking at increasing the amount of U.S. borrowing at longer maturities, with a focus on 20 years. 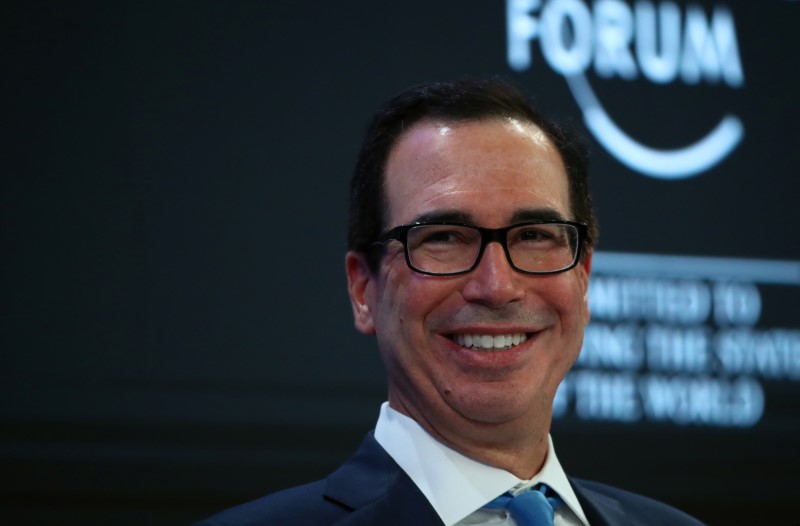 "We can issue a lot more 20-year bonds than we could issue 50- and 100-year bonds. So in terms of our objective in both raising proceeds and extending duration, the 20-year bond is a priority at the moment," he said.

I wouldn't bother starting Phase 2 negotiations yet. It took 18 months to agree on a status quo deal called Phase 1. What chance a Phase 2 before November?  ... (Read More)