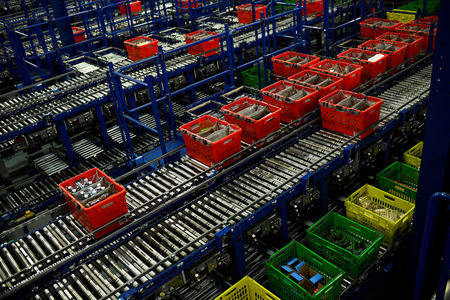 Investing.com -- European stock markets were acting out a well-rehearsed playbook on Monday, as the U.K. underperformed the rest of the continent after Prime Minister Boris Johnson became the latest government leader to announce a ‘lockdown lite’ in the hope of stemming the coronavirus tide.

The positive broader performance represented a bounce from some heavy losses last week, driven largely by final purchasing managers indices that were for the most part revised up from preliminary readings.  The composite Eurozone manufacturing PMI hit a two-year high of 54.8 - a level that, with the tightening of restrictions across the continent over the last week, seems unlikely to be beaten in in the near term.

In the U.K. in particular, it was a familiar pattern of stay-at-home stocks outperforming and cyclical and travel-exposed stocks tanking again.

Discount airline EasyJet (LON:EZJ) fell by 2.3% after CEO Johan Lundgren told Reuters at the weekend that he wasn’t against asking for state aid for the company, a measure that would likely dilute existing shareholders dramatically. By contrast Ryanair (LON:RYA), whose CEO Michael O’Leary continues to fulminate against the repeated government bailouts of favored airlines, rose 1.3%, despite posting a net loss of 197 million euros ($230 million) for the first half of its fiscal year.

The most dramatic movement was, however, the 15% drop in SAS (CSE:SAS) stock as the shares issued through its recapitalization hit the market.

However, the star performer was Ocado (LON:OCDO), as on so many other mornings when the virus has dominated headlines. The company whose technology drives supermarket fulfilment centers saw its stock rise 8.8% after it raised its profit guidance for the year and announced two acquisitions of robotic technology companies for a total of $287 million. The acquisitions promise to allow it to expand into non-grocery markets. Kindred Systems, the larger of the two companies Ocado is buying, has notable clients in the fashion retail sector such as Gap and American Eagle (NYSE:AEO).