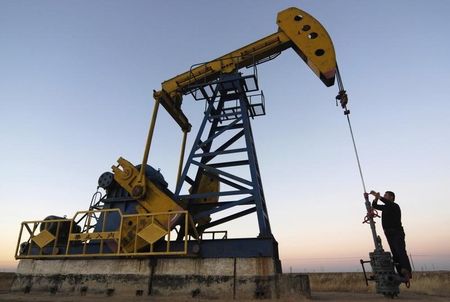 (Bloomberg) -- Shares of oil and gas companies climbed and renewable energy firms tumbled Wednesday as the U.S. presidential election remained too close to call and Republicans appeared set to retain control of the Senate.

While the outcome of the presidential race remains unclear, a Joe Biden victory would likely coincide with a Republican-controlled Senate that could hinder his efforts to address climate change, promote clean energy and roll back fossil-fuel subsidies.

“Perhaps the biggest conclusion to be drawn at this stage is that there is only a small likelihood that existing oil & gas tax incentives will be removed in the U.S. -- even if Biden emerges as the winner,” Artem Abramov, head of shale research at Rystad Energy, said in a note to clients. Still, Biden would be able to ban new fracking on federal lands via an executive order, which would hit producers in New Mexico and elsewhere.

“There was some anticipation of a Democratic sweep and the possibility of major climate reform,” Raymond James analyst Pavel Molchanov said in an interview. Even if Democratic nominee Biden wins, without a Democratic Senate “he’ll have to rely on executive action, tinkering around the edges, rather than anything game-changing or transformative.”

With votes still being counted in key battleground states, it’s unclear if the U.S. will more aggressively shift toward green energy, as Biden has pledged -- or if President Donald Trump will get four more years to promote fossil fuels.

“Even in the event that Biden wins the election, we think the prospects of the solar industry look much less favorable given a lower probability of an extension of the investment tax credit,” said Angelo Zino, an analyst at CFRA, in a research note. CFRA downgraded SunPower and manufacturer Canadian Solar (NASDAQ:CSIQ) Inc. to hold from buy.

While investors may be spooked by the uncertainty, it’s unlikely a second Trump term would significantly thwart the growth of wind and solar power. Demand for clean power has increased throughout the Republican’s presidency, thanks to state-level policies, corporations pushing to go green and a growing appetite for environmental, social and governance, or ESG, investments.

A Biden victory, conversely, could be give natural gas a boost as “a cleaner transition fuel” in the shift to a lower-carbon economy, RBC analyst Scott Hanold said in a note.

(A previous version of this story corrected the size of index decline in second paragraph.)