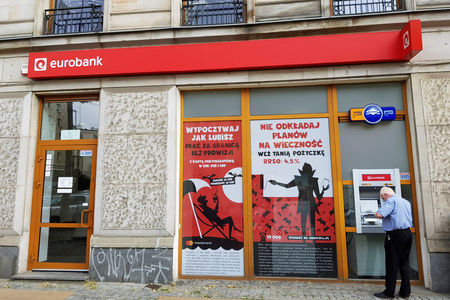 Reuters reported in June that SocGen was exploring a sale of Eurobank, given increasing competitive pressures on the business.

Sources said at that time Santander (MC:SAN), Credit Agricole (PA:CAGR) <CAGR.PA< and Portugal's Millennium (LS:BCP) were among the potential buyers of Eurobank.

"Millennium, Credit Agricole are in the game and Alior has joined too. Santander's BZ WBK is not in the transaction. For Alior this is a continuation of a strategy to develop through takeovers," a source familiar with the transaction said.

Two other market sources also said Millennium had submitted an offer and one of them confirmed that Alior Bank had recently joined the process.

"The market is consolidating, and Alior Bank wants to be an active participant in this process. We have significant experience in effectively conducting such transactions. Eurobank is an interesting takeover subject, with a well-ordered business," Alior Bank said in an emailed statement.

Alior Bank has a market capitalisation of 8.8 billion zlotys and is the ninth biggest bank in Poland by assets. PZU (WA:PZU), state-run insurer, has a 32-percent share in the lender.

Eurobank is the 17th largest Polish bank with assets of 14billion zlotys. Last year, it made a net profit of 103 million zlotys.

The sale of Eurobank would reinforce a broader trend ofconsolidation in Poland's banking sector, which has acceleratedin the past few years as the ruling eurosceptic Law and Justice(PiS) has party encouraged domestic ownership.