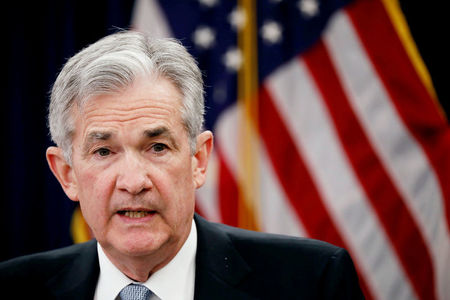 Investing.com - U.S. stocks are set to open sharply lower Thursday, with investors disappointed that the Federal Reserve decided against adding more stimulus in order to advance its goal of spurring inflation.

The U.S. central bank announced Wednesday that interest rates would remain anchored near zero through 2023, and promised to keep rates there until inflation rises consistently.

Chairman Jerome Powell also announced that the central bank had lifted its forecasts for growth, employment and inflation for 2020, but warned that parts of the U.S. economy will keep struggling unless lawmakers come forward with further fiscal stimulus.

Congress continues to struggle to reach a deal on a new coronavirus aid bill--although President Donald Trump has injected some life into talks--and thus some investors had hoped the Fed would carry out more of the heavy lifting by injecting more monetary stimulus.

Earlier Thursday, the World Bank's chief economist Carmen Reinhart said the global economic recovery from the coronavirus crisis is likely to take as much as five years.

Housing starts for August are due at the same time, and are estimated to be around 1.48 million, a small reduction from 1.49 million the prior month.

In corporate news, cloud software company Snowflake (NYSE:SNOW) is likely to be in focus again after its stock doubled on its first day of trading. As is Uber (NYSE:UBER) after Bloomberg reported that it’s planning to sell part of its $6.3 billion stake in Chinese ride-hailing firm Didi Chuxing to raise cash.

Oil prices fell Thursday, rebalancing after recent strong gains as producers in the Gulf of Mexico took steps to resume output in the wake of Hurricane Sally.

A panel of the Organization of the Petroleum Exporting Countries and its allies, together known as OPEC+, meets Thursday to review the market, but is not expected to announce any market-moving measures.

U.S. crude futures traded 0.2% lower at $40.11 a barrel, while the international benchmark Brent contract fell 0.1% to $42.17. Both benchmarks saw gains of close to 5% during the previous session.

Powell and FEd is a joke. he says we will turn our head to other sid e when there is inflation but fx traders dont trust him. dollar increase:)))) dump the fed!!  ... (Read More)