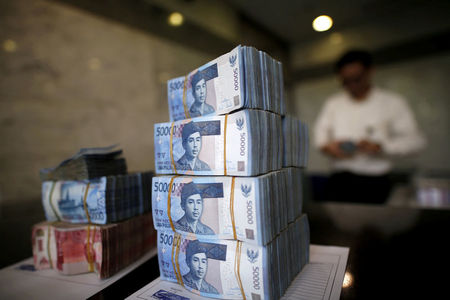 (Bloomberg) -- Indonesia’s central bank cut its key interest rate for a fourth straight month amid a deteriorating outlook for global growth, saying any further moves would depend on incoming economic data.

Bank Indonesia lowered the seven-day reverse repurchase rate by 25 basis points to 5% Thursday, as predicted by 23 out of 30 economists surveyed by Bloomberg. The rest had forecast no change.

“The decision is in line with an inflation estimate that remains under control and investment yields that remain attractive, also as a pre-emptive step to push the domestic economy amid a slowing global economy,” Governor Perry Warjiyo told reporters in Jakarta.

While the bank’s policy stance remains generally accommodative, its future course will “be data dependent from one month to another,” he said.

Thursday’s easing comes after the International Monetary Fund revised down its forecast for global growth and cut its 2019 projection for Indonesia to 5% from 5.2% in July. Despite signs of an impending deal between the U.S. and China, the trade war between the two behemoths is continuing to weigh on Indonesia’s economy, which grew at its slowest pace in two years in the second quarter.

“The move to cut rates again is aimed at supporting the growth momentum in the face of slowing retail sales, falling automotive sales and sluggish investment,” said Josua Pardede, an economist at PT Bank Permata in Jakarta. “Depending on GDP growth in the third quarter of this year, we think the room for another BI policy rate cut is still open in the following months.”

Bank Indonesia raised interest rates by 175 basis points last year as it battled an emerging-market rout that was pressuring Indonesia’s currency, but this year its focus has shifted to supporting growth.

The Jakarta Composite Index was up 1% as of 3:12 p.m. local time, but didn’t move much on the decision. The rupiah, which has gained 2.5% against the dollar this year, fell 0.1% to 14,045 per dollar after the decision. Yields on 10-year government bonds pared an earlier drop and were little changed on the day at 7.08%.

Gareth Leather, a senior Asia economist at Capital Economics, said the likelihood of rising global risk aversion -- which could scare investors away from emerging-market currencies like the rupiah -- might limit Bank Indonesia’s options going forward.

“Given Indonesia’s high level of foreign currency debt, we doubt the central bank would want to cut aggressively” in such a scenario, Leather said.

Indonesian policy makers remain comfortable with a relatively subdued inflation environment that has allowed them to lower borrowing costs since July. Consumer prices rose 3.39% in September from a year ago, well within Bank Indonesia’s target band of 2.5%-4.5% for this year.

“BI’s rate cut today was no surprise given the combination of sluggish growth, benign inflation and a reasonably stable” rupiah, said Krystal Tan, an economist at Australia & New Zealand Banking Group Ltd. in Singapore. “As long as external stability is maintained, the bias is probably toward a deeper easing cycle.”