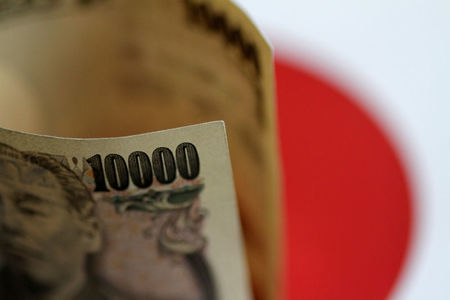 Investing.com - The first full week of trading in 2020 looks likely to be a volatile one as the U.S. killing of Iran’s most senior military commander continues to reverberate through markets, putting geopolitical risk front and center. This week will also bring the first U.S. nonfarm payrolls report of the decade, which is expected to point to a slowdown in jobs growth after November’s bumper gains. Market participants will also be watching ongoing developments relating to the U.S. -China trade deal and Brexit.

Investors rushed into safe-haven assets on Friday after U.S. air strikes in Iraq killed Qassem Soleimani, Tehran’s most prominent military commander, sending the Japanese yen to a three-month high, while the U.S. dollar was knocked by the weakest domestic factory activity in a decade.

The dollar fell as low as 107.8 per yen and was last down 0.4% on the day at 108.1. The yen is often seen as a haven from risk, given Japan's status as the world's largest creditor nation. A holiday in Tokyo also made for thin conditions, exaggerating the move.

The Swiss franc, another currency perceived as safe, surged to a four-month high of 1.0825 against the euro. The U.S. dollar hit a one-week high versus the euro.

The U.S. dollar index initially benefited from the move into safe-haven assets, but those gains were erased after the Institute for Supply Management (ISM) reported that the manufacturing sector contracted significantly in December. It was last up 0.08% on the day at 96.602.

The U.S. manufacturing sector contracted in December by the most in more than a decade, with order volumes crashing to a near 11-year low and factory employment falling for a fifth straight month.

The longer-term effects on the dollar are unclear. Though it weakened Friday, the greenback may ultimately benefit if slower U.S. manufacturing dents hopes for global growth in 2020.

“The idea that other countries that are large exporters to the U.S. might see a large rebound in the near term - that idea is losing traction here,” said Karl Schamotta, chief market strategist at Cambridge Global Payments.

Ahead of the coming week, Investing.com has compiled a list of significant economic events likely to affect the markets.