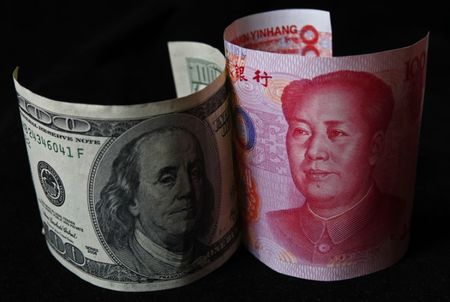 Investing.com -- Foreign exchange markets are correcting some of Monday’s sharp movements in early trade in Europe on Tuesday, slowly absorbing the shock of the trade war escalation between the U.S. and China.

At 03:00 AM ET (0700 GMT), the dollar index was at 97.115, with the greenback giving up some of its gains against the euro, and risk-proxy currencies such as the Aussie, while clawing back its losses against the yen. The index measures the greenback against a basket of six major currencies.

On Monday, the index had hit a three-week low of 96.822 as investors fled the U.S. equity market in search of safe havens and raised their bets on the Federal Reserve cutting interest rates this year. The yield on the two-year Treasury note fell eight basis points on Monday to 2.19% and is now clearly below even the bottom end of the targeted Fed Funds rate of 2.25%-2.50%.

New York Fed President John Williams (NYSE:WMB) said in a speech on Monday that the low interest rate environment is likely to persist for years, but gave no clearer hints about how the Fed will react to the latest trade developments. Fed chairman Jerome Powell had called the trade dispute one of the key risks to the economy at his last press conference.

Before that, the first of the big European confidence indicators for May – Germany’s ZEW index - is due at 5 AM ET (0900 GMT), while sterling faces a test from the monthly labor market report at 4:30 AM ET (0830 GMT), where the market will be looking to see whether average earnings do any more to justify an interest rate hike when the fog of Brexit lifts.