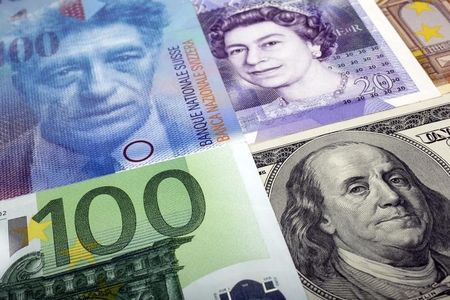 Investing.com -- The dollar was slightly higher and the British pound stumbled at the start of the week, on lingering doubts about the outlook for the world economy as the market takes a closer look at the much-hyped breakthroughs on the U.S.-China trade dispute and on Brexit.

Risk appetite had leapt on Friday after the U.S. and China announced a “roadmap to a phase 1 agreement” which included the suspension of a tariff increase planned for this week and a commitment from China to buy more U.S. agricultural produce.

At heart, though, the agreement was nothing more than a month-long standstill agreement, analysts at Nordea Markets warned.

“We will carefully remind you that such a “promise” is worth nothing at all, and currently it looks more likely that running for president on an anti-Chinese agenda is better/smarter (for re-election purposes) than doing the opposite,” Martin Enlund and his analyst team wrote in a weekly preview.

The effects of the trade dispute on China’s were on display again in weaker-than-expected trade data from China overnight, which showed the sharpest drop in imports since 2016. Enlund and his team noted that the yuan would need to fall to 7.30 to the dollar to neutralize the effect of existing tariffs on the economy. However, the “phase-1 agreement”, along with reports of a planned VAT tax cut for Chinese manufacturers, was still enough to send both the offshore and mainland yuan rates to their highest since August on Monday.

By 3:45 AM ET (0745 GMT), the dollar index, which measures the greenback against a basket of developed market currencies, was up 0.2% at 98.213, marking gains against higher-yielding currencies but modest declines against havens such as the yen and Swiss franc. EUR/USD was down 0.2% at $1.1019.

Another factor dampening sentiment was the cool reaction from the EU to the U.K.’s proposals on resolving the Irish border-related elements of the Brexit Withdrawal Agreement. The EU’s top negotiator Michel Barnier reportedly told EU diplomats at the weekend that the proposals represented an “untested” risk that were not acceptable, according to The Guardian.

A paper released at the weekend by the UK in a Changing Europe observed that, even if the U.K.’s latest proposals were accepted, Prime Minister Boris Johnson’s proposals still promised a substantial hit to the U.K. economy. It said the deal could leave per capita British gross domestic product as much as 6.4% below where it would be if it remained in the EU, on a 10-year horizon. That compares with an estimated 4.9% hit from the deal negotiated by Johnson's predecessor, Theresa May.