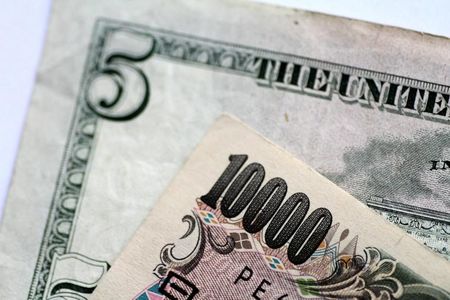 Powell’s comments prompted U.S. Treasury yields to rise to their highest levels in several months, helping the dollar. However, this support didn’t last long as traders factored in higher inflation going forward and the impact this would have on real yields.

“The Fed keeping rates lower for longer – and showing greater tolerance for higher inflation – is a key ingredient in the current narrative of negative U.S. real yields de-basing the dollar,” said analysts at ING, in a research note.

“The key barrier to a further immediate sell-off in the dollar, however, is positioning. Net speculative shorts against the dollar and long EUR/USD positioning are close to the extremes of March 2018.”

Elsewhere, the USD/JPY pair fell 0.3% to 106.20, after Reuters reported that Japanese Prime Minister Shinzo Abe has decided to resign, citing a person familiar with the matter.

Public broadcaster NHK earlier said Abe, who has battled the disease ulcerative colitis for years, wanted to avoid causing problems for the government due to the worsening of his condition.

“There's some nervousness and concerns because he's the longest serving prime minister and, with him gone, there could be some uncertainty. Perhaps 'Abenomics' is coming to a close. And perhaps we could see some repatriation and this is why the yen has strengthened somewhat,” said Moh Siong Sim at Bank of Singapore, in a Reuters report.

"I'm not convinced it would have a lasting impact on the yen itself, because if the news is true, whoever the successor is likely to come from the LDP and is likely to be a close ally and therefore policy continuity would still be there."