Top 5 Things to Know in the Market on Thursday, April 23rd

Top 5 Things to Know in the Market on Thursday, April 23rd 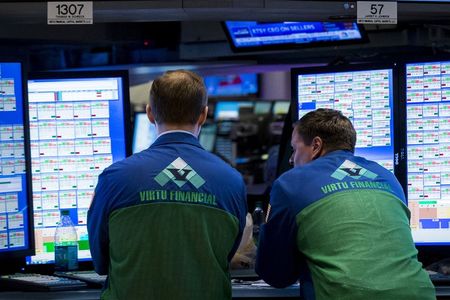 Investing.com -- Weekly jobless claims data from the U.S. are expected to ease from the record highs of earlier this month, while still remaining well above any historical precedent. Purchasing manager surveys in Europe hit new record lows, but markets are supported by the ECB's decision to lend more freely against junk collateral. EU leaders meet to discuss their crisis response again, amid talk of a multi-billion recovery fund, while oil prices extend their recovery. Intel (NASDAQ:INTC) leads the day's list of companies reporting earnings, but Blackstone (NYSE:BX), Eli Lilly (NYSE:LLY) and Union Pacific (NYSE:UNP) will be out first. Here's what you need to know in financial markets on Thursday, April 23rd.

The U.S. will report its weekly jobless claims data at 8:30 AM ET, the indicator that has been the most current and potent expression of the economic damage inflicted by the coronavirus pandemic.

Analysts polled by Investing.com expect 4.2 million initial claims for last week, down from 5.245 million the week before, and down some 50% from the spike at the start of April. Continuing claims are expected to rise to 16.48 million from 11.98 million last week.

New home sales, due at 10 AM ET, are expected to have fallen 15% on the month in March, while the Kansas City Fed’s business survey at 11 AM is likely to follow the trail blazed by the Empire State manufacturing index and Philly Fed survey earlier in the month.

Earlier, purchasing manager surveys for Europe were even worse than expected, hitting all-time lows across the board as respondents grew less optimistic about the pace of the economic rebound.

The European Central Bank loosened its collateral rules to ensure that it can still lend to Italian banks if – as seems likely – the Italian government loses its last investment-grade credit rating. The move led to bank stocks in the eurozone periphery outperforming on Thursday in early trading, while sovereign risk premiums fell.

The ECB’s action came ahead of an EU summit via teleconference later Thursday, which is expected to approve some expansion of borrowing by the European Commission to help fund the region’s recovery from the pandemic. It’s highly unlikely that leaders will approve any joint debt issuance by the euro zone, as wanted by Spain, France and Italy.

German Chancellor Angela Merkel told the Bundestag on Thursday, however, that Germany may have to make “much higher contributions” into the EU budget in future.

U.S. stocks are set to open mixed, consolidating Wednesday’s gains that came on the back of a stabilization in oil prices.

A conspicuous feature of after-hours earnings releases on Wednesday was the resilience of CSX (NASDAQ:CSX) stock and Kinder Morgan (NYSE:KMI) stock, which held up despite predictable declines in their current business.

Las Vegas Sands (NYSE:LVS) stock, meanwhile, rebounded 7.6% in premarket trading despite evidence from its Macau business that casinos may face one of the greatest challenges of all businesses in returning to normal after the pandemic.

Oil prices extended their recovery, which started with President Donald Trump’s attempts to inject a bit of geopolitical risk premium on Wednesday with a threatening tweet in the direction of Iran.

Iran, which needs higher oil prices every bit as much as Texas, was happy to play along earlier Thursday, warning of a “swift response” to any U.S. provocation.

Analysts say that saber-rattling is unlikely to offer any sustained support, given the vast imbalance between supply and demand. Wednesday’s weekly report from the Energy Information Administration showed that spare storage capacity at Cushing, the delivery point for the NYMEX futures contract, is down to less than 18 million barrels. Given that Cushing stocks rose by 4.8 million barrels last week, the risk of prices returning to zero at the next contract expiry does not seem to have gone away.

Earnings season continues with reports from Blackstone Group, Eli Lilly and Union Pacific all figuring prominently before the bell, and chipmaker Intel, Domino’s Pizza and E-TRADE due after the bell.

Intel’s report comes after some weak data out of South Korea suggesting the recovery for the semiconductor industry will be slow and hard, while Domino’s and E-TRADE have both enjoyed tailwinds from lockdowns and financial market volatility, respectively. E-TRADE rival TD Ameritrade reported late on Wednesday and avoided Interactive Brokers’ mishap with the crude oil expiry earlier this week, but its figures were still hurt by the price war that saw most online brokers cut trading commissions to zero earlier in the year.