The bulls fought back yesterday as a broadly positive tone to risk appetite trumped concerns markets are having over how the US Presidential Election could pan out. How sustainable this improvement is could hinge on the talks between the Democrats and the White House over a fiscal support package. The Democrats propose around $2.2trillion of funding, whilst Treasury Secretary Mnuchin and the White House propose around $1.6trillion. Although a vote was postponed last night, there is still a chance that fiscal support could be agreed upon as talks continue. This is helping to prop up markets today. You can also add in some broadly positive US data read through, with a better than expected ADP number boding well for Nonfarm Payrolls tomorrow. This has pulled Treasury yields higher and the dollar is coming back under pressure once more (USD is a safe haven play primarily right now). Subsequently, we see forex majors edging risk positive once more and equities gaining. Watch also the precious metals ticking higher on the renewed dollar weakness. Once more we see major markets trading around dollar moves. Manufacturing PMIs are in focus now today.

Wall Street closed solidly higher last night with a rebound of +0.8% on S&P 500 to 3363, whilst futures are continuing this move today (E-mini S&Ps +0.7%). Asian markets were more cautious with the Nikkei all but flat and the Shanghai Composite -0.2%. In Europe there is an early tick higher, with FTSE futures +0.5% and DAX futures +0.2%. Forex majors show a risk positive bias, with USD and JPY underperforming, whilst AUD and NZD rebound strongly. Commodities are benefitting from the dollar weakness, with gold +0.7% and silver +2.4%. Oil has also ticked higher early today by just under half a percent.

There are another couple of Fed speakers scheduled for today. The FOMC’s John Williams (NYSE:WMB) (voter, centrist) speaks at 1600BST, whilst the FOMC’s Michelle Bowman (voter, leans hawkish) speaks again at 2000BST.

When the Kiwi broke both its six month uptrend and the multi-month pivot support at 0.6600, the risk was that bear pressure would grow to break the first really key support at 0.6490. However, support at 0.6490 has since held firm as risk appetite has picked up again. This has enabled the formation of what is now a three month consolidation range of around 300 pips between 0.6490/0.6795. It was interesting to see that the old 0.6600 pivot was initially acting as resistance after the rebound from 0.6510. However, a decisive positive candle with a rally back above 0.6600 has helped to strengthen the support of the range and now lends a near term positive bias. Although it means the near term outlook is improving, the medium term outlook is solidly neutral still. This comes with momentum indicators swinging back higher, with Stochastics and MACD lines looking to bottom. The RSI between 38/62 over the past few weeks does though reflect a neutral outlook. Continuing to close above 0.6600 implies a move towards the next pivot at 0.6715 which is initial resistance. 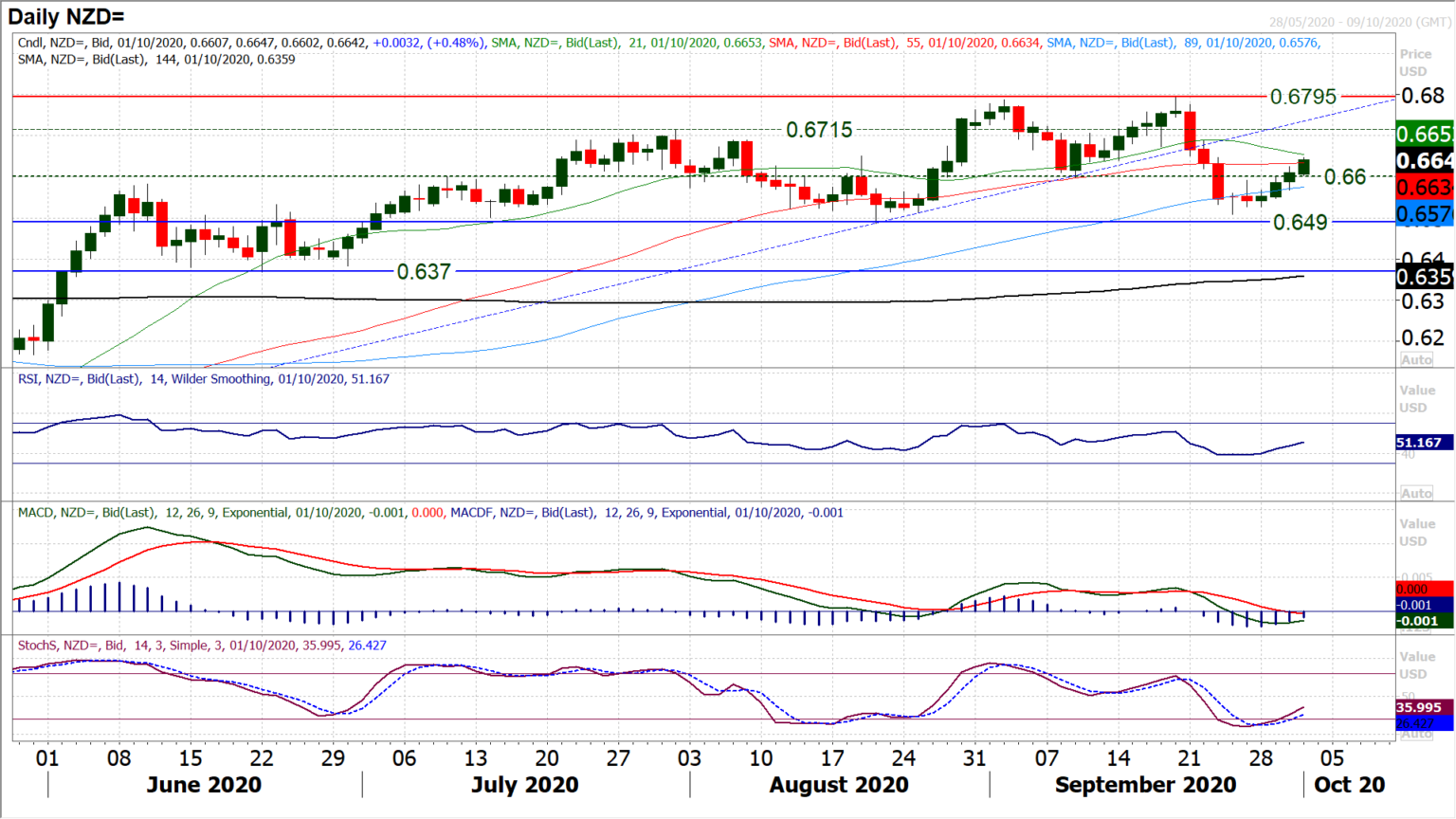 After a rebound over the past few days, the pair continues to trade around a crucial crossroads. Is this move a rebound into resistance and another chance to sell? Or is the dollar strengthening over and EUR/USD ready to resume a run higher? In assessing the outlook, we continue to focus on the resistance band 1.1695/1.1750 and how the market responds to this and the resistance of the four week downtrend (falling today around 1.1785). If the bulls can breach these two then the rebound will be seen as more sustainable. The RSI has ticked higher but towards 50, whilst MACD lines are around neutral. Yesterday’s intraday reaction to moving back below was encouraging, with near term higher low support at 1.1685 now. Continuing to close above 1.1695 will hold the crossroads. We still see a renewed corrective move back towards 1.1610 and below as likely, but the bulls are seriously questioning this outlook now. 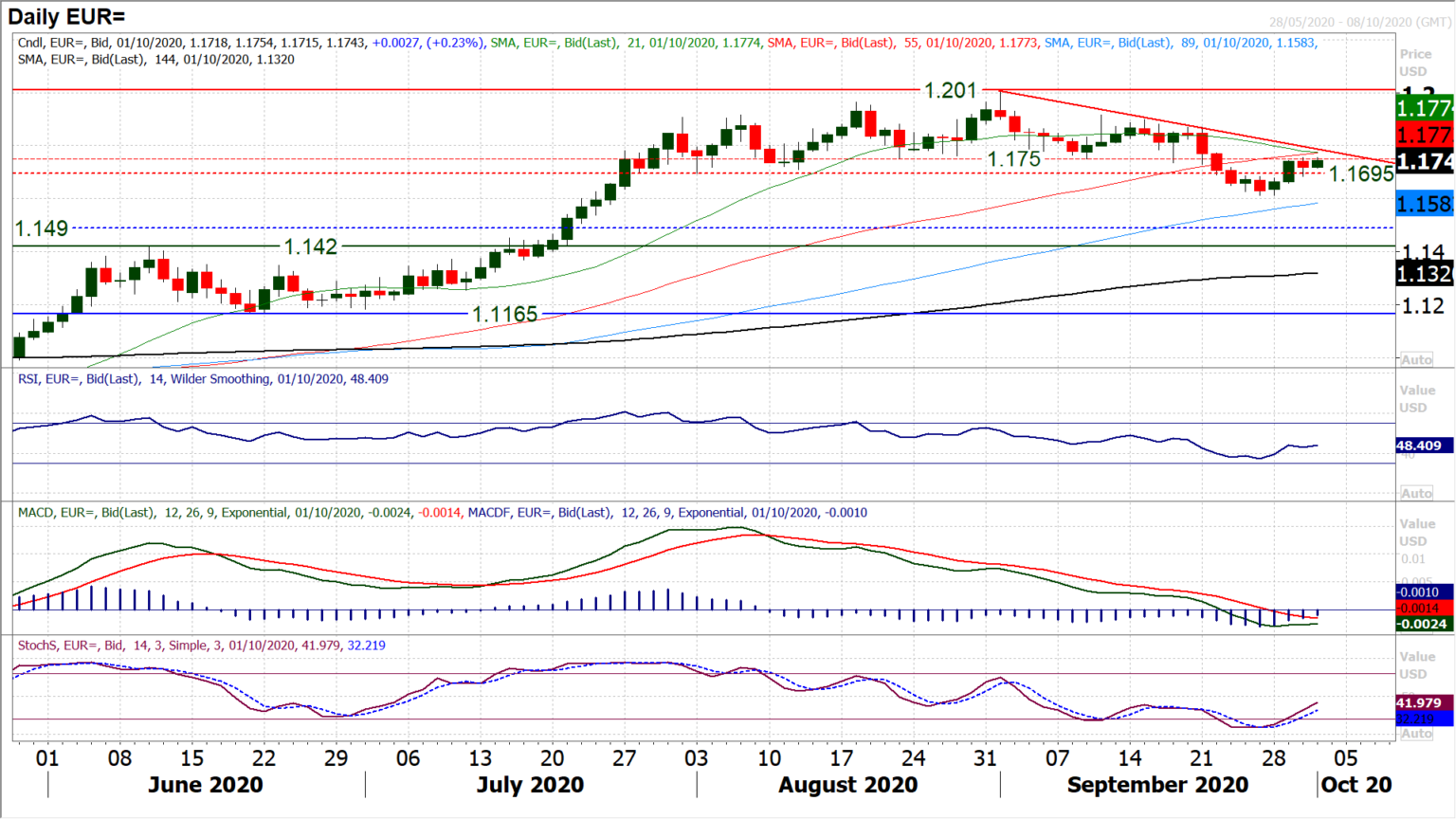 Although intraday moves reflect a degree of uncertainty with choppy trading on Cable, the direction of travel continues higher near term. The big question is whether the bulls can overcome key medium term pivot/resistance at 1.3000. As a run of positive closes builds, with the market pulling above 1.2860 (a September pivot) we see a positive bias within what is still a three week consolidation between 1.2670/1.3000. The bulls will though take encouragement from momentum, with RSI and Stochastics moving sharply higher and a bull cross now on MACD. This is setting up for pressure on 1.3000. Intraday weakness is seemingly now a chance to buy. Initially we see support around 1.2900 but any supported weakness towards 1.2860 looks to be a near term chance to buy for pressure on 1.3000 now. It would need a closing breakout above 1.3050 to confirm a bullish breakout. A failure below 1.2820 (yesterday’s low would flip the near term outlook negative towards 1.2670. 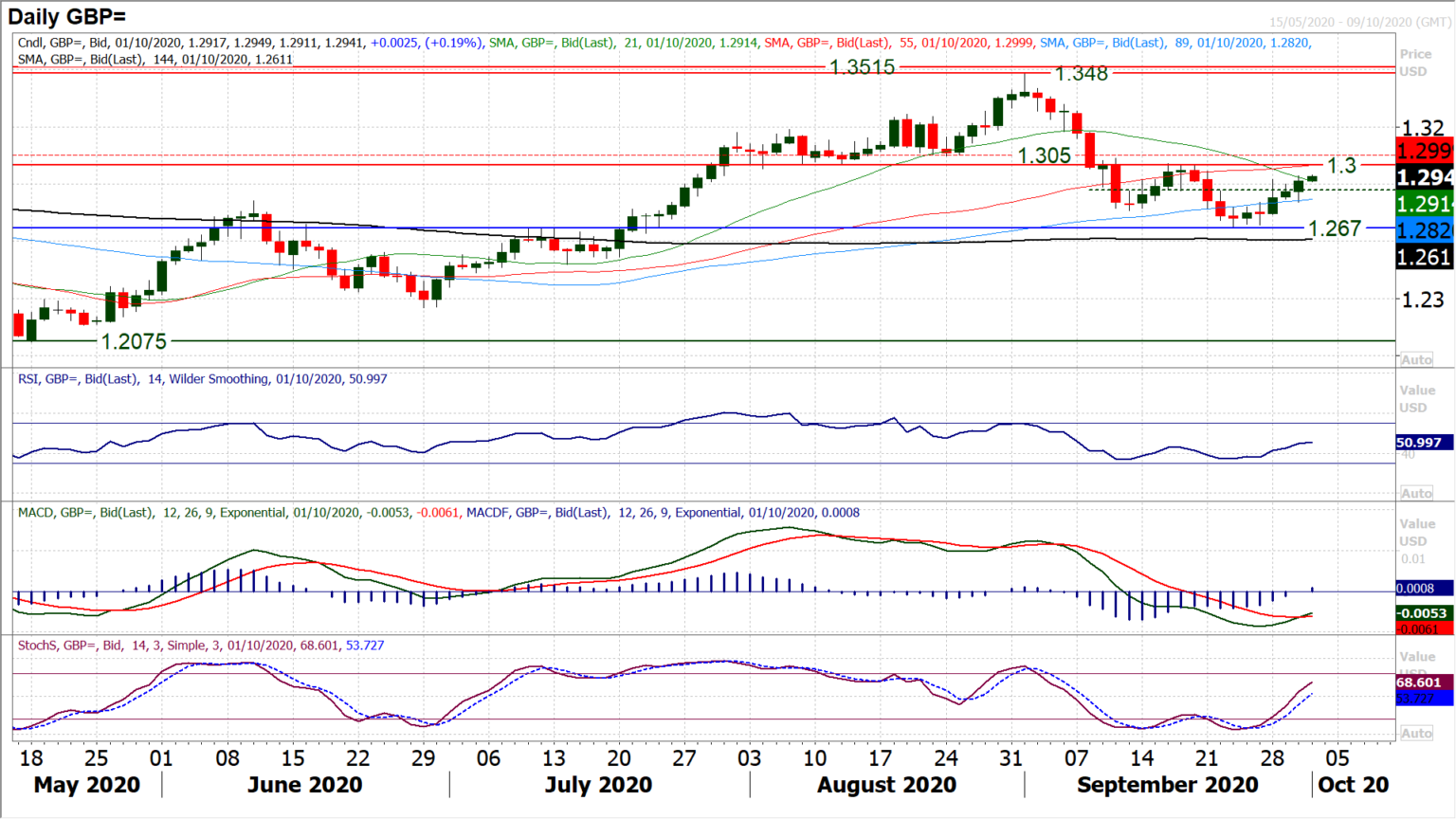 The drift higher on Dollar/Yen seems to be slowing now. Since the decisive recovery kicked in with three consecutive strong bull candles early last week, we are now seeing the rally with far less conviction. Neutral candles have been creeping in, and now yesterday’s negative candle. There was a previous tendency to consistently see intraday weakness bought into during the US session. This has now dried up. The market has turned lower from yesterday’s high of 105.80 which was just under the resistance of the three month downtrend and 55 day moving average (both around 105.90 but also both a basis of resistance in recent months). This questions just how far the near term rally can go. We now look for renewed sell signals. Hourly chart indicators show initial support at 105.20/105.30 and if this is breached then the risk is that the rally turns lower again. Back under 105.00 risks a retreat to 104.00 again. Momentum indicators reflect the move running out of steam just at the areas where previous moves have (especially on RSI). Closing above resistance at 106.00 is needed to really push the recovery forward now. 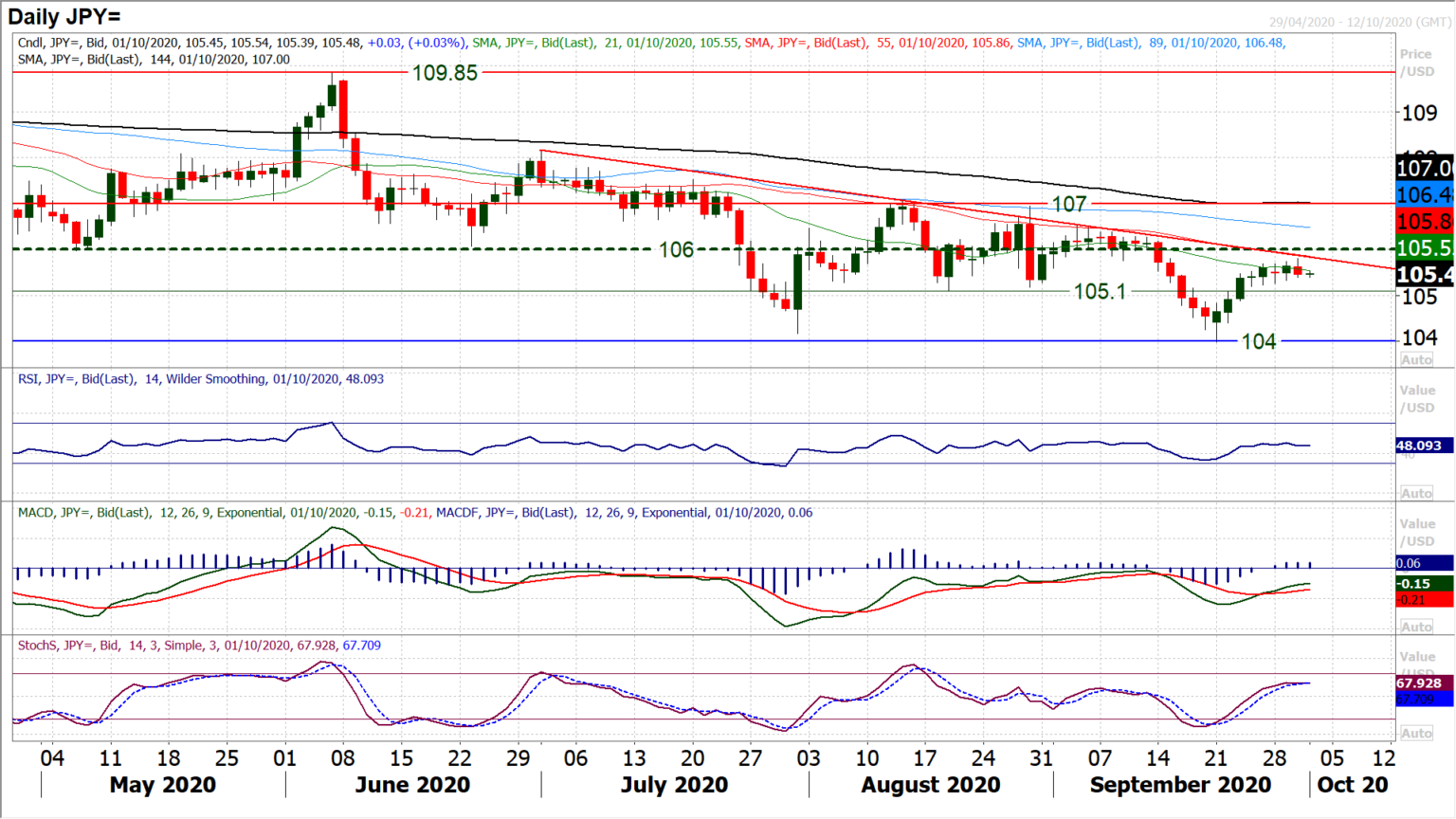 The near term outlook remains on a knife edge. Yesterday’s negative candlestick leaving resistance at $1899 was certainly a concern for the bulls with the key overhead supply above $1902 looming. However, there has again been a positive response early today and the market is ticking back towards this resistance again. Can the bulls begin to break through? This is a crucial moment for the outlook. Is this a near term bounce to be sold into, or is it the resumption of the gold bull run. How the bulls respond in the band between $1902 (the start of the intraday lows of August/September) and $1926 (the 23.6% Fibonacci retracement of $1451/$2072 which was for weeks key closing support) will be crucial. Another bull failure today will add to the fear that gold is still corrective from the August all-time high. Our preference is that the resistance at $1902/$1926 is too much and another lower high forms before a retest of $1848 kicks in. The hourly chart shows gold picking up from $1880/$1883 near term support again this morning. Holding this will be key near term. Dollar moves remain key as the negative correlation with gold is still very strong. Also newsflow on the US fiscal support package needs to be watched. 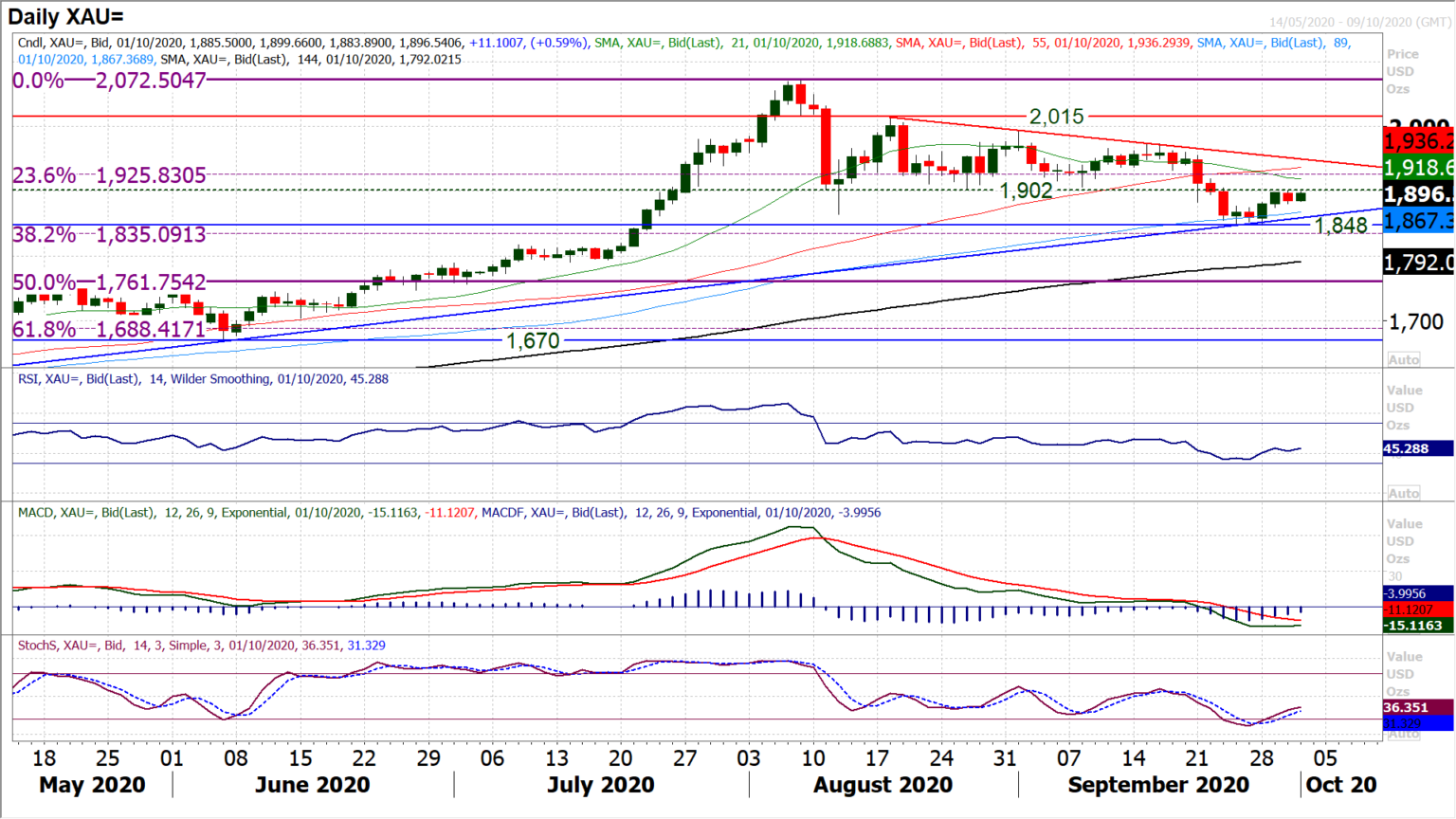 Trading around the pivot at $41.30 leaves Brent Crude neutrally configured. The price action of the past four weeks has been in a trading band of around 10% between $39.30/$43.80. Momentum indicators are fluctuating around neutral areas, with the RSI and Stochastics oscillating around their mid-points of 50, whilst MACD lines are also subdued (albeit a shade under neutral). Today’s jump higher at the open is due to the front month contract rollover and should be not perceived as bullish. However, we see it likely that this recent consolidation will continue for now. Until support at $39.30 is broken, or resistance at $43.80 breached, it is difficult to take much of a view. 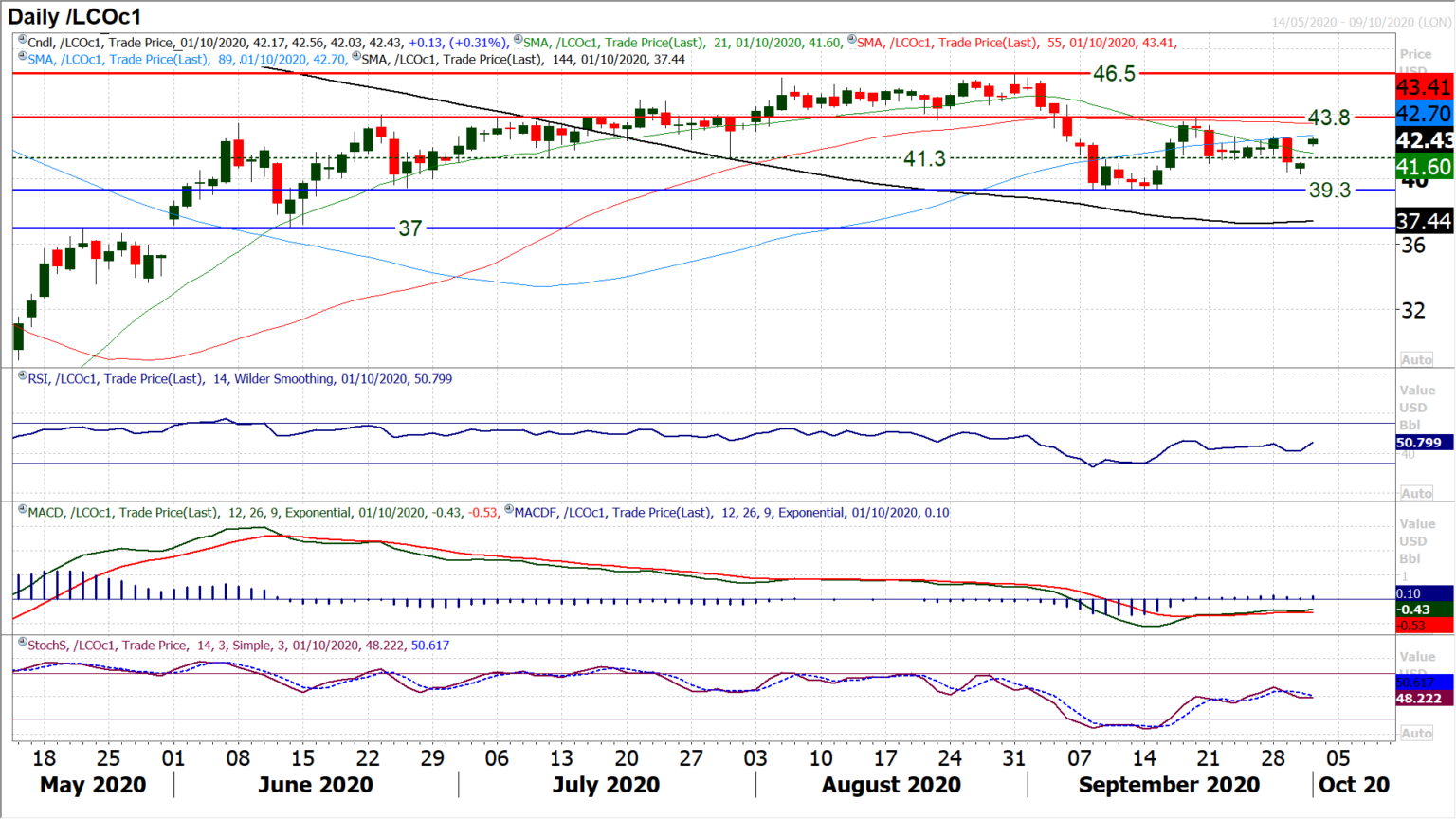 After a brief period where the Dow was sitting at a crossroads, the bulls have pushed on again. The prospect of fiscal stimulus seems to be the dangling carrot to tempt investors to buy equities again. A decisive move to break a three week downtrend, along with a positive candlestick which has now pulled the Dow clear of 27,445/27,580 resistance means that the bulls are getting back on track. Futures are ticking higher again today and the bulls will be eyeing initially 28,025 (yesterday’s intraday high) but then the key lower high of 28,365. Encouragingly too, the old pivot band 27,445/27,580 seems to be a basis of support now in an improving outlook. The caveat would be how markets could turn were the fiscal package to fail in Congress again, but for now, the glass is half full again. 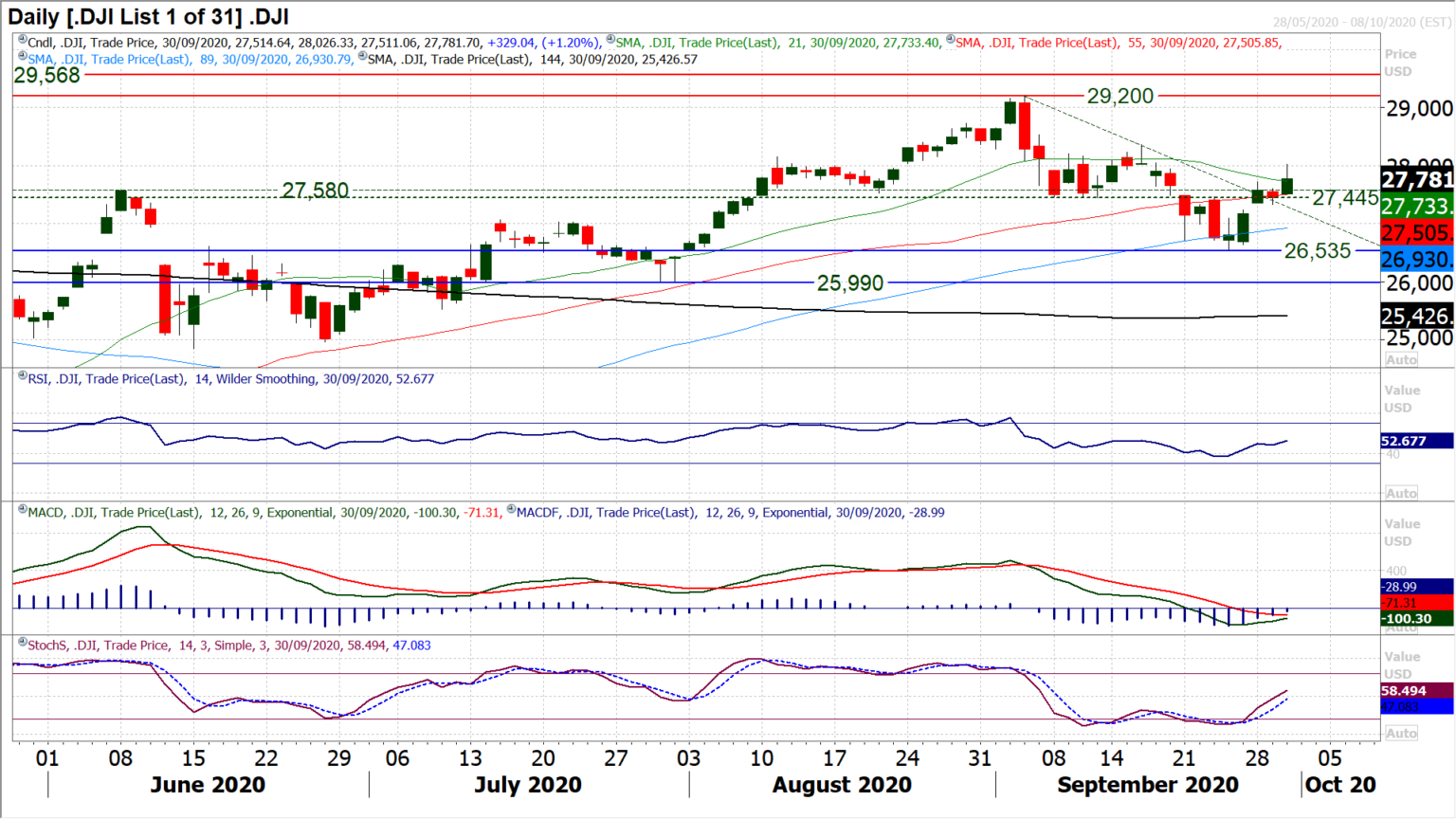