Trump Vs. FOMC: Which Will Be Biggest FX Disruptor?

Trump Vs. FOMC: Which Will Be Biggest FX Disruptor?

The wild swings that we saw in the FX market on Tuesday gave us a taste of the bigger moves that could transpire over the next 24 hours. There was little rhyme or reason for the day’s volatile price action with investors buying U.S. dollars into the European open, selling aggressively in the first half of the London trading session only to drive USD back up after U.S. equities opened for trading. The greenback ended the day lower against all of the major currencies with the exception of the Australian dollar. Turnaround Tuesday lived up to its reputation but we think it is the 2 big events and month-end flows that led to the unusually volatile trading session. U.S. data was better than expected with consumers growing more confident in January while November house prices increased by 0.75%. Of course all of this is a distraction from the main events this week – President Trump’s State of the Union Address, the FOMC meeting and January Nonfarm Payrolls.

It is hard to predict how market moving President Trump’s State of the Union will be. While there’s no doubt that he will tout the strength of the economy, the decline in the unemployment rate, gains in stocks and passage of the tax-reform bill, he could also inflame trade tensions, exacerbate geopolitical risks and set back U.S. funding talks. A lot can go wrong during the address that could have significant ramifications for the forex market. Creating more global uncertainty (political or economic) would drive the dollar lower and the yen higher. It would also exacerbate the slide in the Dow, which declined as much as 400 points Tuesday. There is a far more significant risk to the downside than upside for the U.S. dollar, U.S. assets and risk appetite. However if Trump focuses on the economy and skirts over Russia, North Korea, NAFTA and other trade issues, a wave of relief will send the dollar higher. The market’s reaction to Trump’s speech will set the tone for trading in Europe and early North America. It could even overshadow the FOMC announcement later in the day.

Wednesday’s FOMC meeting will be Janet Yellen’s last. No changes are expected to interest rates but everyone believes that Yellen will leave on a high note. The FOMC statement will be upbeat and some economists even expect the Fed to upgrade its balance of risks and inflation statement. If they are right, the dollar will rise with the magnitude dependent on post-Trump moves. In the event that the USD/JPY trades above 108.50 pre-FOMC, we could see a 75- to 100-pip reaction to a more hawkish FOMC statement. Investors are currently pricing in a 93% chance of a March rate hike and a change in the risk assessment will go a long way in helping the U.S. dollar catch up to market expectations. However if the statement remains unchanged with very little adjustments, or Trump’s comments overshadow FOMC, we could see USD/JPY fall to 108.00. Taking a look at the table below, since the December meeting the U.S. economy was mixed. The most significant changes were in market dynamics with the dollar falling, which is inflationary, 10-year yields rising 36bp and the S&P 500 shooting up 7% to fresh record highs. Yellen isn’t likely to address any of this (especially with no press conference) as she lets her successor Jerome Powell deal with the consequences. 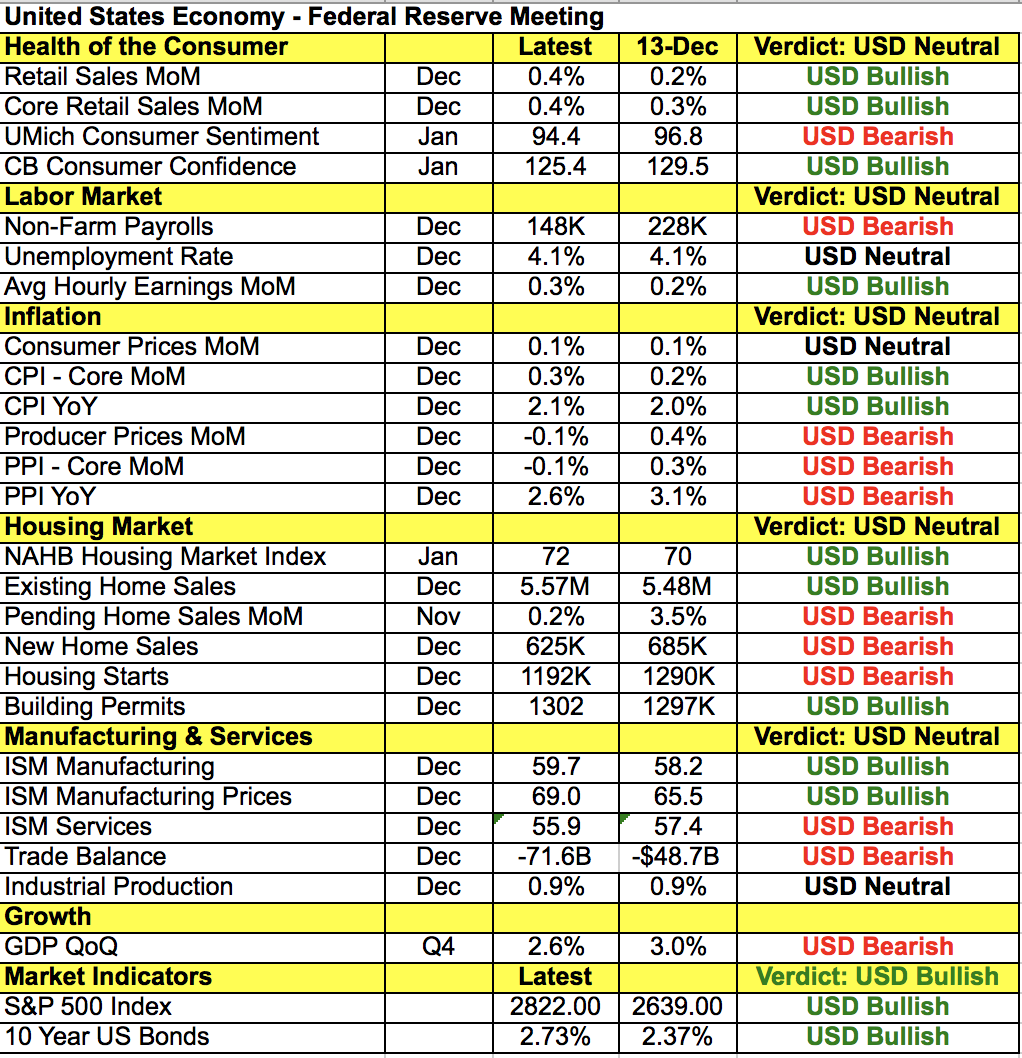 Having traded as high as 1.2454, EUR/USD ended the day unchanged against the greenback as early gains were given up on the back of softer Eurozone confidence and inflation numbers. German consumer prices fell -0.7% in January, which was more than expected and a potential consequence of the strong currency. This does not bode well for the broader Eurozone CPI core and estimate reports due for release on Wednesday. German retail sales and labor-market data are also on the calendar and according to the PMIs, employers continued to add jobs at a healthy pace in January. But all of this may not matter much as the euro and other major currencies take their cue from the market’s appetite for U.S. dollars following Trump’s speech and the FOMC.

Softer-than-expected mortgage approvals did not prevent sterling from outperforming the euro and U.S. dollar thanks to Bank of England Governor Carney’s upbeat tone. In a speech to Parliament on Wednesday he said wages are growing, the labor market is tight and investment is up with further gains expected in 2019. The BoE also expects some pickup in productivity. The only thing he said about the rising pound is that the pass-through is still working through inflation and he appreciates Trump’s dollar comments. So there was no jawboning from the central bank. While GBP/USD will trade on the market’s appetite for the greenback, EUR/GBP is likely to head lower.

The Australian dollar is also in play tonight with Q4 CPI scheduled for release. Economists are looking for consumer price growth to accelerate but lower food prices in the last 3 months of the year and no improvements to consumer inflation expectation put the risk to the downside. Lower highs and lower lows also point to a possible reversal in AUD/USD with a move to 80 cents likely if CPI is weak and if Trump doesn’t cause too much disruption to the market. Canadian GDP numbers are also due for release and we are very bullish USD/CAD ahead of the report as significantly weaker retail sales and trade point to softer growth. Also, if Trump talks about the challenges of NAFTA, it will be negative for the Canadian dollar. If he focuses on the improvements in the economy, it will be positive for the greenback, which could be a win-win for USD/CAD. No economic reports are due for release from New Zealand, which held its ground on Tuesday thanks to Monday night’s much stronger-than-expected trade-balance report. The country turned a trade surplus for the first time in 5 months on rising exports. With that in mind, both AUD and NZD will be sensitive to Chinese PMIs.