A key gauge of global manufacturing output showed a record gain in June, adding to signs that the world's factories are recovering strongly since the peak impact from the COVID-19 pandemic back in April. However, prospects beyond an initial rebound from lockdowns remain uncertain, with business sentiment and order books well below levels seen earlier in the year, with weak global trade flows acting as a notable drag.

The output index from the JPMorgan (NYSE:JPM) Global Manufacturing PMI survey, compiled by IHS Markit from its proprietary business surveys, rose from 39.1 in May to 47.0 in June, surging by an unprecedented 7.9 index points to reach its highest since January. The rise builds on a prior record gain in May and brings the index back to it highest since January.

The record improvement in the index is put into perspective when compared against official manufacturing output data. Since 2007, when IHS Markit's US PMI data were first included in the index, the global PMI's output gauge has exhibited an 84% correlation with the annual rate of change of official production data, underscoring how the PMI provides a very accurate guide to changing output trends. Importantly, the PMI signals are available several months ahead of the comparable official data.

A simple OLS regression can be used to determine what a PMI reading implies in terms of annual growth [*]. The PMI-implied annual growth rate can be estimated as follows: 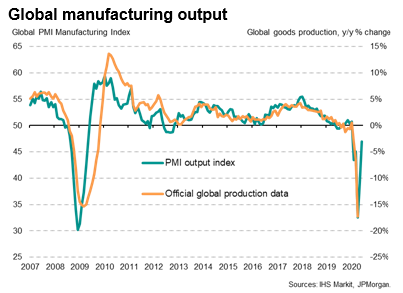 The marked easing in the annual rate of decline implies considerable month-on-month gains in the official production data during May and June, which corresponds with factories reopening after COVID-19 related shutdowns in many countries during April and easings of other measures designed to control the virus.

Rising factory production was reported in June across 14 of the 31 countries for which IHS Markit collects manufacturing PMI data, the highest proportion since February and up from just one (China) in both April and May. Even better news came in the form of the number of countries with rising output indexes, which held at 29 in June, which represents the joint-highest proportion on record.

At the other end of the scale, the steepest drop in production was recorded in Japan, followed by Mexico, Indonesia and South Korea. Five of the six worst performing countries were in fact located in Asia, resulting in output growth in Asia excluding China to lag far behind the global average. 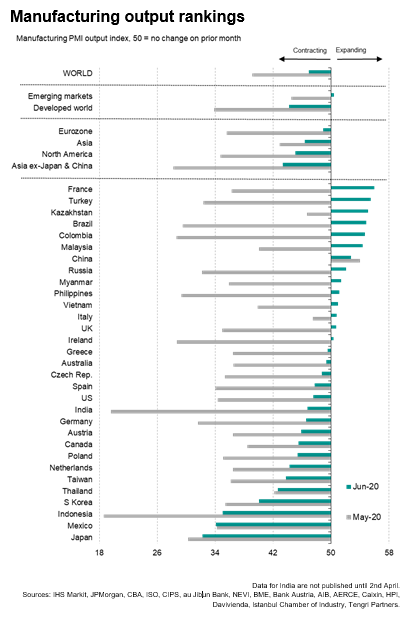 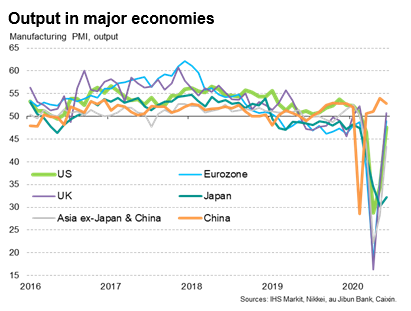 Looking at the largest developed economies, a return to growth in the UK was accompanied by marked easings in rates of decline of production in the US and the Eurozone. In contrast, Japan's downturn eased only modestly during June, reflected in Japan's bottom position in the global rankings.

Emerging markets meanwhile saw a return to growth for the production trend for the first time since January, outperforming developed markets, thanks in part to the sustained expansion of output in China, which has now seen production on a rising trend since March, albeit at a reduced rate in June.

The loss of growth momentum in China sends a warning signal to other countries. Having locked down its economy to fight the coronavirus earlier than other countries, and opened up earlier, the dip in China's latest output numbers hints that a lack of demand - notably in export markets - has limited the ability of China's factory sector to regain strong growth. Note that although total new orders rose to the greatest extent since December 2019 in China, exports orders continued to fall.

A key area of weakness persisting in the global manufacturing sector is trade, with export orders continuing to fall globally at a notably faster rate than overall new orders during June. This in part reflects an ongoing underperformance of trade flows relative to total demand that has been evident since the US-China trade war flared up in 2018, but is also in part attributable to weak demand for imports around the world, in turn sometimes linked to the reshoring of purchases due to the pandemic. 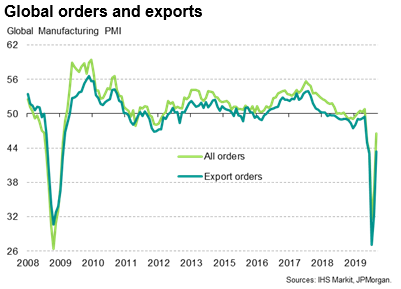 However, even the PMI's global new export orders index has started to show material gains since the all-time low recorded back in April. While the index was consistent with an 11% quarterly rate of contraction of global trade back in April, this has eased to just a 3% rate of decline being signalled in June. 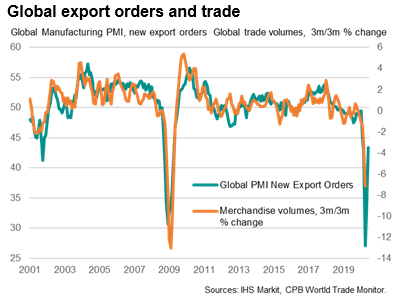 Looking ahead, manufacturing sentiment about the year ahead rose sharply in June, but remained below that seen earlier in the year, prior to the pandemic. Note that these were levels that were already weak by historical standards, due mainly to simmering trade war worries.

With sentiment still relatively subdued and backlogs of orders likewise depressed by historical standards, the forward-looking indicators remain something of a concern, hinting that an initial rebound from the COVID-19 lockdowns could lose momentum unless demand can continue to strengthen in coming months. 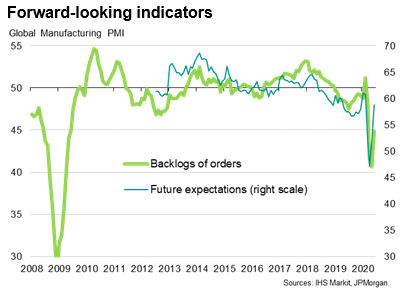 Note that we continue to focus our analysis on the PMI survey output indices rather than the headline 'PMI'. The latter is a composite gauge derived from five survey variables: output, new orders, employment, inventories and suppliers' delivery times. These five components usually move in a synchronised pattern. However, due to supply chain delays arising from the COVID-19 pandemic, the suppliers' delivery times index has moved counter-cyclically, dampening the signal from the PMI. 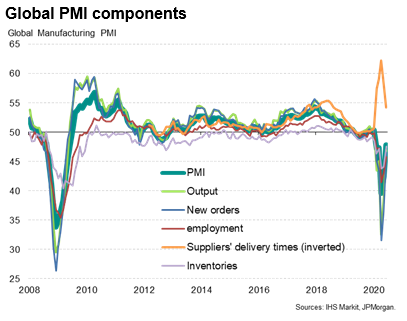 * The regression yields an adjusted r-square of 0.70 with a standard error of 0.028. The r-square rises to 0.76 if lagged values of the PMI are also used to reflect the PMI's lead over official data.