The “48 hours” deadline for the talks between the Democrat leadership and the White House over fiscal stimulus comes to pass today. Democrat House Speaker Nancy Pelosi said over the weekend that Tuesday was the final point at which the stimulus could be delivered before the Presidential Election, two weeks from today. Whilst there have been fluctuations on Wall Street indices, it is interesting that currency and commodities markets have all but lost direction now. According to Pelosi’s camp, they have “continued to narrow their differences” but we have been thrown back on forth on several occasions over recent weeks on this stimulus package. With the potential to use the failure to deliver on stimulus as a political football in the last run up to the election day, we do not hold out much hope that anything positive will be agreed. If this is the case, then a jolt to sentiment could be seen in the coming days, before markets settle in for the prospects of a Biden victory to the White House. Biden holds a 10% lead in the averaged polls, whilst also leading in many of the “swing” states. As for today’s session, there is a mix of sentiment on markets, with little real direction on USD (downside on AUD came after dovish RBA comments with NZD falling in sympathy).

Wall Street ended yesterday with selling pressure into the close. The S&P 500 fell by -1.6% at 3426, whilst futures have clawed back some of this (E-mini S&Ps +0.4%). Asian markets were mixed overnight, with Nikkei -0.4% and Shanghai Composite +0.2%). European indices are accounting for the late slide into the close on Wall Street, with FTSE Futures -0.3% and DAX futures -0.6%. In forex, the only real movers are AUD and NZD weakness. In commodities, with little real move on the dollar, there is a consolidation on gold (-0.1%) and silver (flat). Oil is drifting back but once more lacks real direction.

After yesterday’s sharp negative candle saw the S&P 500 closing at an eight session low. The key will now be how the market responds to the threat of a continued correction. All eyes are still on the communications surrounding fiscal stimulus, with today apparently a soft deadline after the “48 hours” limit set by Democrat House Speaker Pelosi. It means that Wall Street is at a key inflection point, not only on a newsflow basis, but also we see technically. Yesterday’s retreat to close around the 3429 old key September/October breakout support leaves the bulls back at a crucial level. Technically, this could still be buying opportunity time on the pullback. However, momentum is turning corrective now, with the Stochastics confirming a near term sell signal. If there is no real response of support from the bulls today, with another negative candlestick, this would open a deeper retreat towards 3330 which is the next real support. A new mini downtrend has formed in the past week and will need to be breached for the bulls to be back in control (today falling around 3497), with the hourly chart showing initial resistance at 3440. 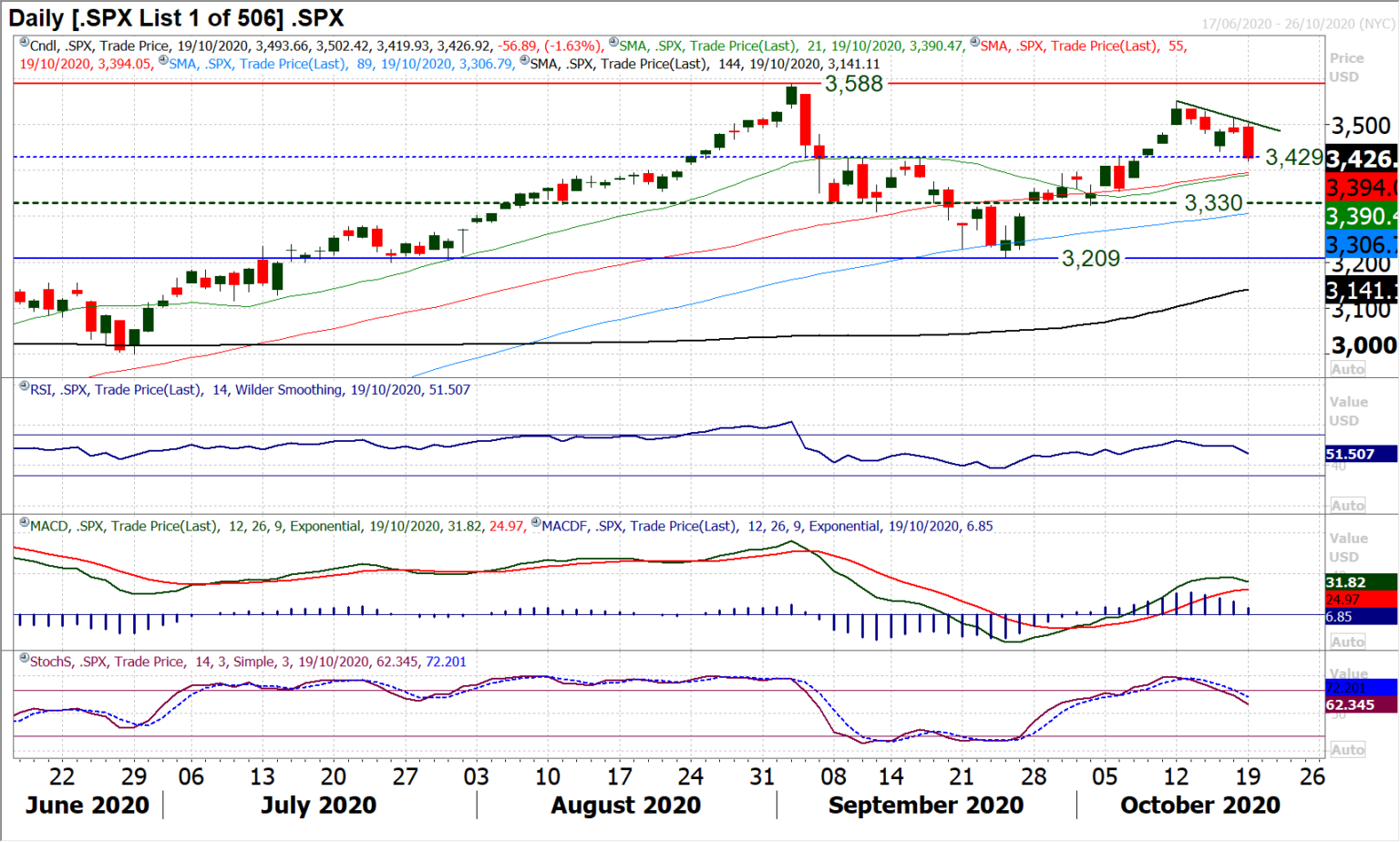 There has been a persistent swing back and forth on changes in risk appetite which has pulled the dollar higher and lower in recent weeks. The driver has been the constant uncertainty and fluctuating expectation on the fiscal stimulus story out of the US. The result is that EUR/USD has been unable to hold any real trend for weeks now, whilst momentum indicators are oscillating tightly around neutral levels (RSI has been between 45/56 for three weeks). With a decisive move higher (USD negative) yesterday, support around 1.1685/1.1695 has held firm and the bulls will now be looking towards a test of the 1.1830 October high once more. A pullback off the day highs yesterday leaves a nagging doubt and element of caution for the bulls this morning , even as the market has ticked slightly higher initially. Resistance of yesterday’s high is at 1.1795 and protects 1.1830. It is difficult to take a view on EUR/USD right now. 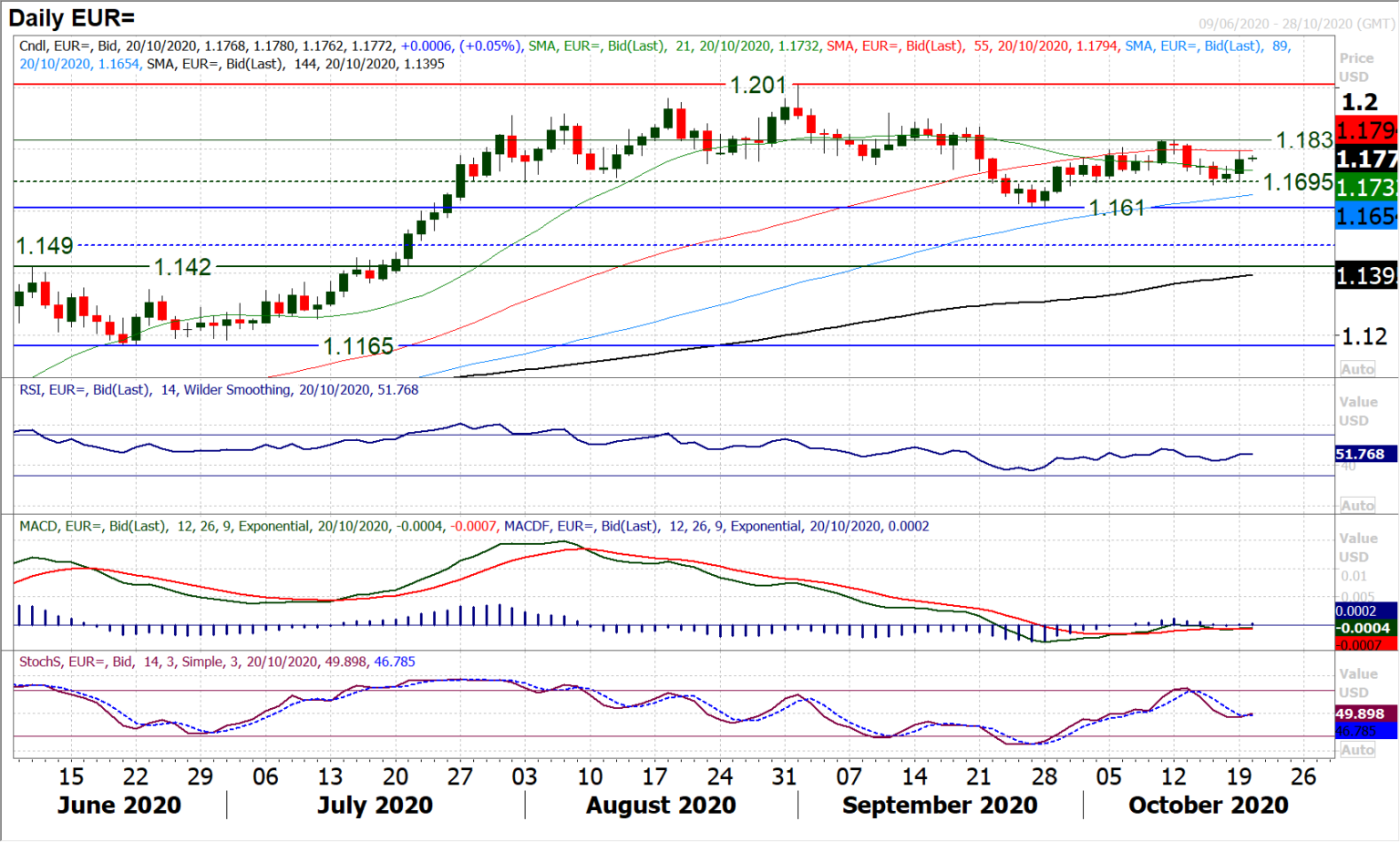 Elevated levels of intraday volatility are still a feature of Cable trading right now. Once more we saw a rally into 1.3000 failing to hold yesterday and Cable dropping back -75 pips into the close. It is indicative of the constant swing back and forth not only of USD expectations but also on GBP with uncertainty over Brexit trade deal developments. Cable is subsequently stuck in a sideways range. Support has developed at 1.2845 but the rallies have faltered between 1.3000/1.3080 repeatedly over the past six weeks. Trading within a clutch of neutral moving averages, we also see RSI and MACD momentum indicators almost dead neutral. It looks that is will be a newsflow driven breakout for Cable, so we watch US fiscal stimulus and Brexit trade deal developments again. 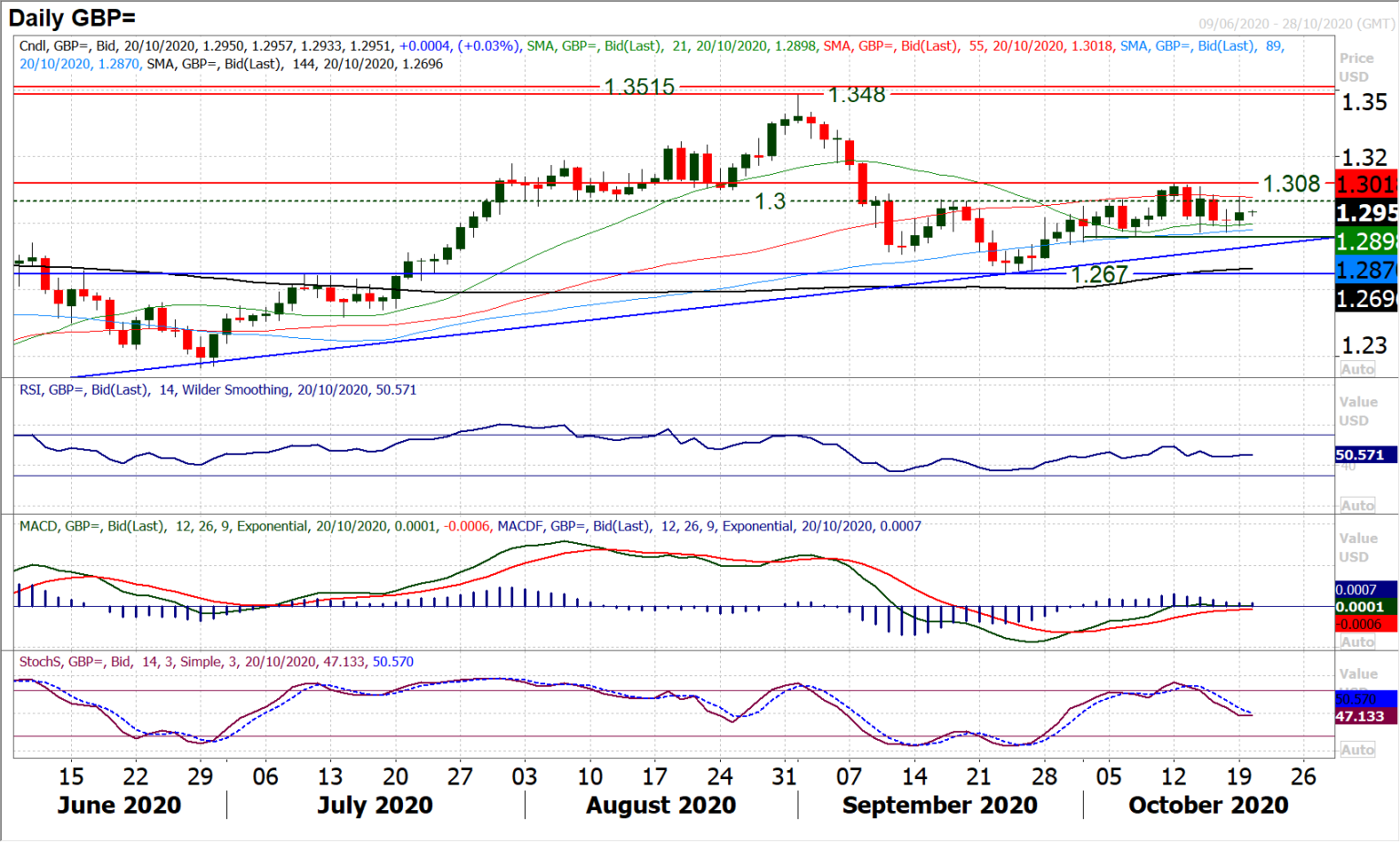 A mixed outlook continues to dominate on Dollar/Yen as another candlestick lacking conviction formed yesterday. We continue to see the pair trading with a medium term negative bias (the three and a half month downtrend confirms that). Subsequently, we continue to play for selling into strength. In recent sessions 105.50 has been a struggle for the bulls, but even though there is an early tick higher today, we look towards the likely formation of another lower high. With the trending falling around 105.85, now also under the old 106.00 pivot resistance, this tick higher will likely be another opportunity to sell. It means that 105.50/106.00 is now a prime sell zone as the market continues to form lower highs and rallies falter at lower levels. We favour selling for pressure towards 104.90 and below once more. A decisive close above 106.10 would abort this strategy. 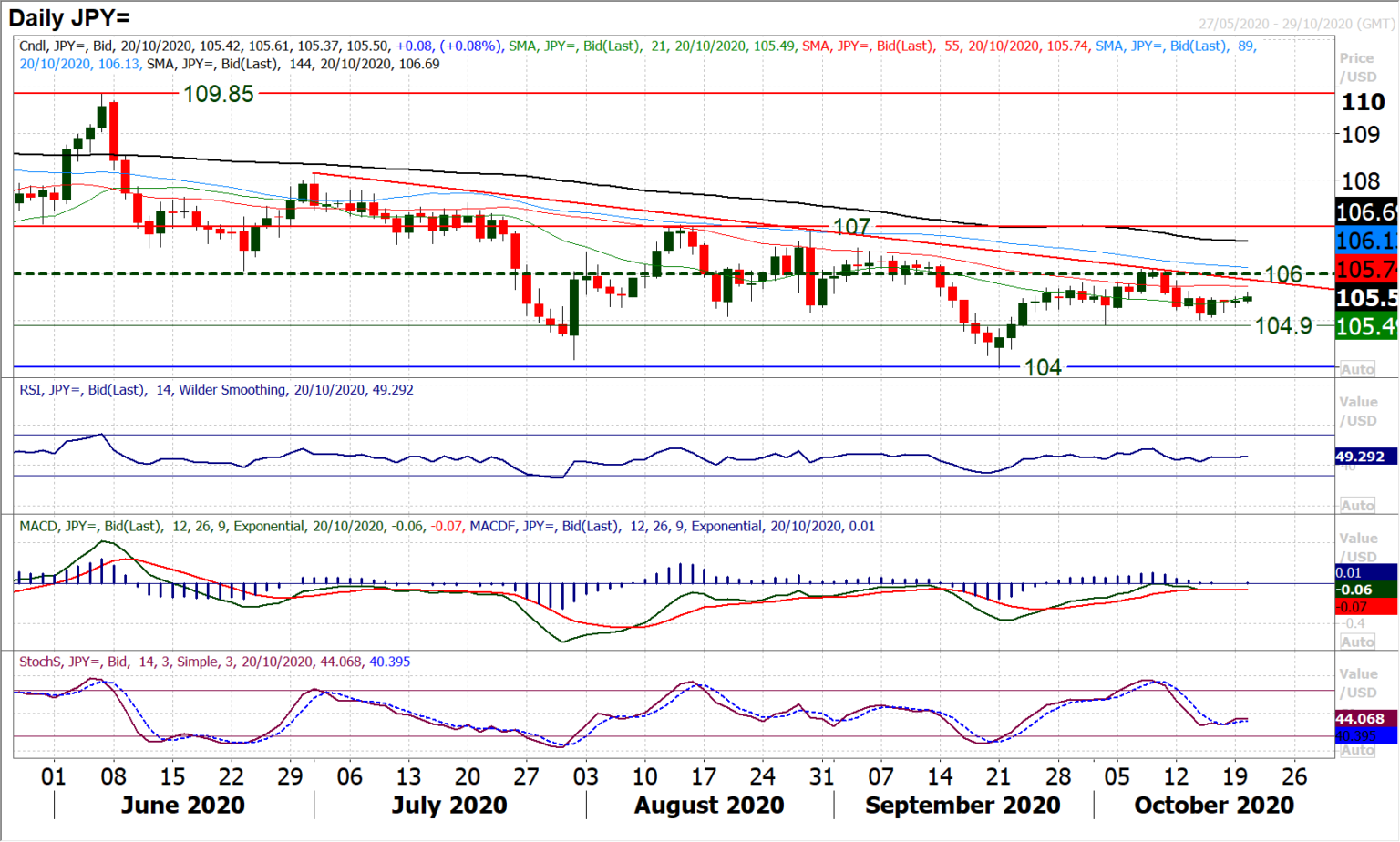 The consolidation continues. As the two big trendlines continue to converge but right now, it would appear that the market is unwilling to take a view on gold. The support of the six month uptrend rises at $1888 today, whilst the two month downtrend falls at $1922. It is of little real surprise that the price seems to be gravitating once more around the $1900 area, with the pivot/resistance band between $1902/$1933 a barrier to renewed upside. Within this, momentum indicators are extremely neutral and lack conviction. The daily RSI continues to hover a shade below 50, whilst MACD lines are flat just under the zero line (i.e. neutral). With a run of small bodied candles (lacking conviction) and the high/low range of the last three sessions all less than the Average True Range of $26, this is definitely a market in “wait and see” mode. A close below $1882 would begin to generate downside momentum (confirmed below $1873 support). A close above $1933 would generate positive momentum. For now though, as with several major markets, it is a waiting game (likely to be for fiscal stimulus and or the US Presidential election). 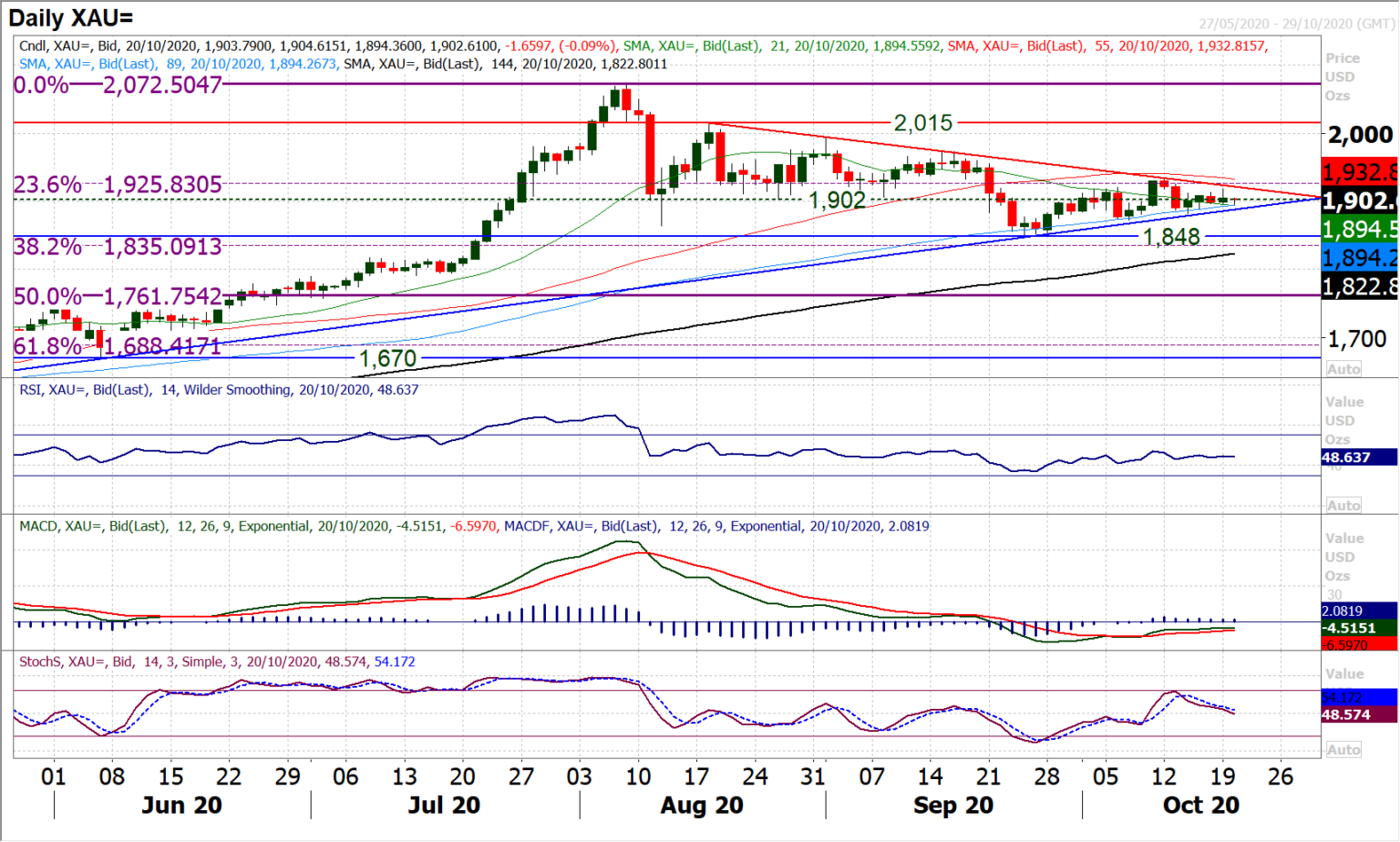 The consolidation continues, although just in the past few sessions another mild negative drift has taken hold. This is once more bolstering the resistance of the range highs $43.55/$43.80 and means that the magnetic attraction of the mid-range pivot at $41.30 is once more a force. Momentum indicators drifting over to reflect the range again and a lack of bull traction. We look for rallies to fade around growing resistance $43.20/$43.55 for pressure back towards $41.30 and the six week range between $38.80/$43.80 to continue. 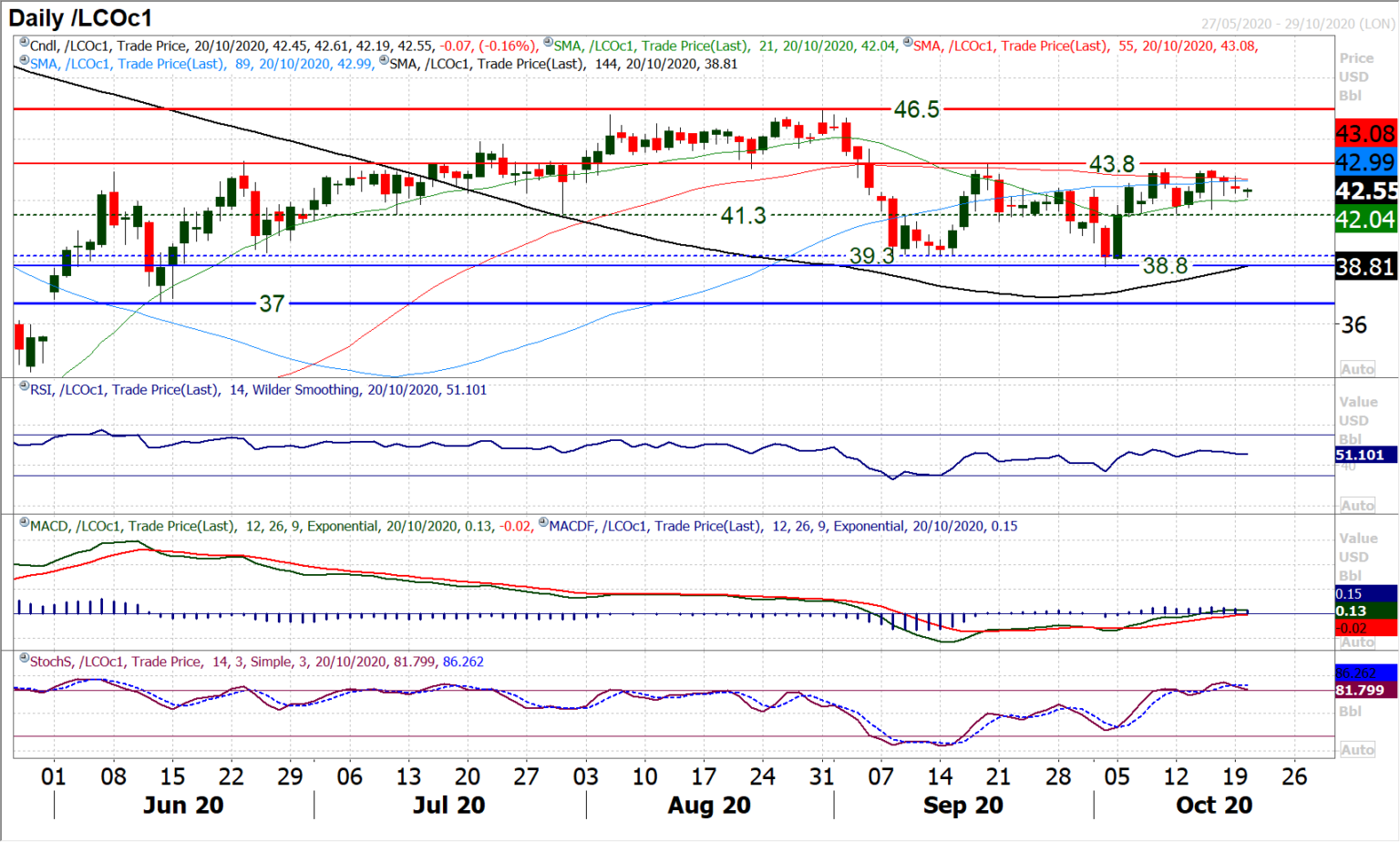 After fluctuating around in the past few sessions with uncertainty surrounding closing levels, there was a decisive view taken yesterday and the sellers came out in force. A solid negative candle which saw the Dow around -1.6% lower in a move which means that the 28,040/28,365 breakout support is under serious threat. We continue to view near term weakness as a chance to buy on the Dow, but the near term bullish outlook would be far less positive if the market were to close below 28,040. The concern is that already we see the Stochastics pulling decisively lower, and if the RSI moves below 50 this would be a three week low and could suggest a deeper near term correction coming through. Supports around 27,730 and 27,380 would then come into play. Futures are ticking slightly higher early this morning, but the cash index needs to build support again 28,040/28,365. The bulls will be looking for a response today and a close back above 28,365 would be a positive move. 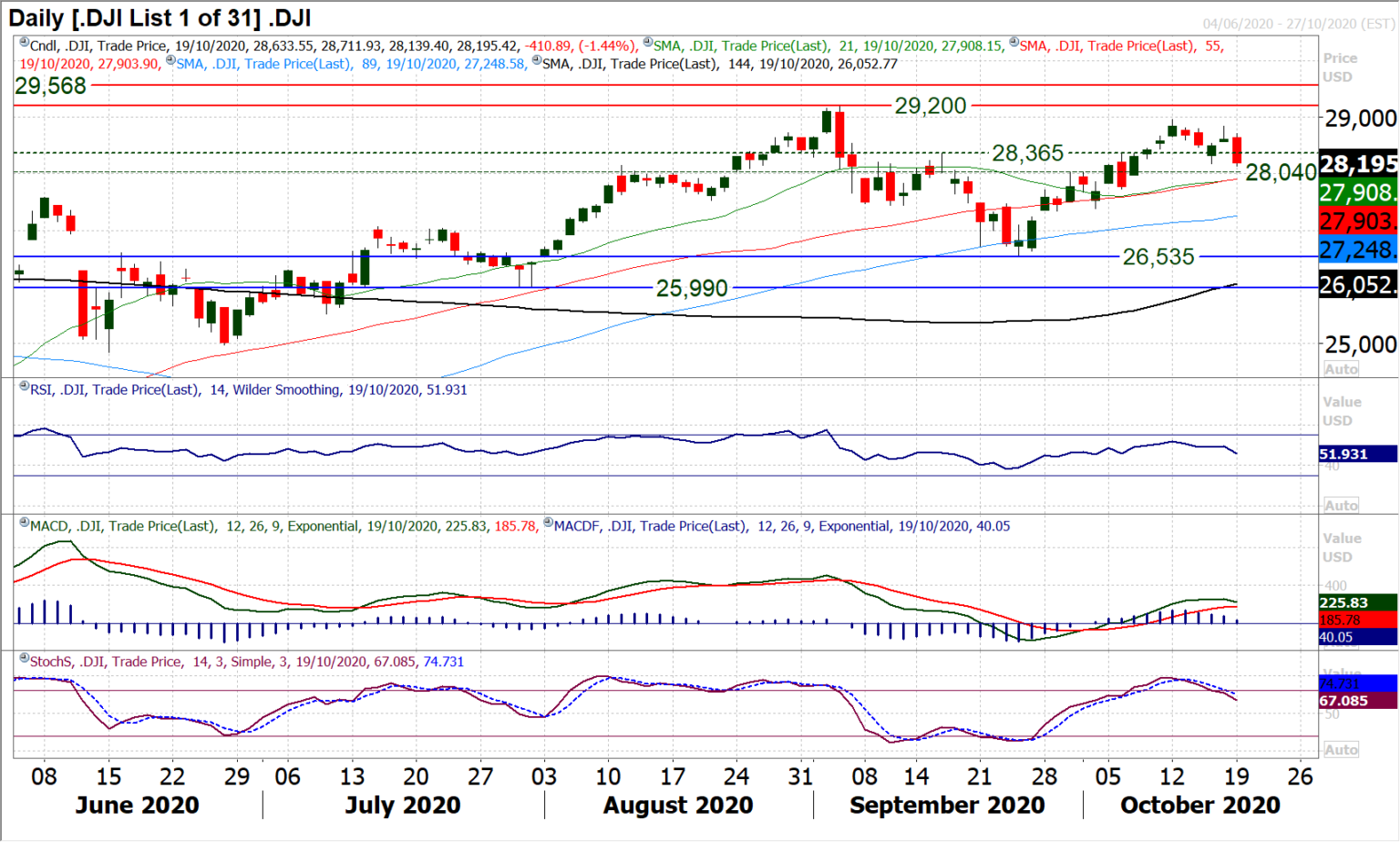