Week Ahead: Focus To Turn From Politics To Economics?

Week Ahead: Focus To Turn From Politics To Economics?

Last week was driven by geopolitical tensions, where US and China were playing a game of checkers, by taking turns in announcing plans of imposing new tariffs on one another. Certainly, the markets were affected the most, as they could not decide on a clear direction. The week was finished off with worse than expected jobs figures in the US, that gave the final shake up in the market, before it closed on Friday.

We are hoping that this week will be more economic news driven, rather than by emotional politics. We will be expecting reports from the US around the PPI and CPI figures, together with the oil inventories data. The ECB will be publishing their Account of Monetary Policy Meeting information, whereas Britain will give us an indication on how manufacturing production is developing.

On Monday, early morning, we get the German Trade balance figures for the month of February. We will see if the surplus number stayed in line with the expectation of 21.4B.

Tuesday is not going to be a very active day economic news wise. The only bigger piece of data, that could shake up the markets a bit is the US Producer Price Index that measure a change in input prices of raw, semi-finished or finished goods and services. If input costs rise, some will be absorbed by the producer and some passed on to the consumer. PPI is carefully watched by central bankers, as the figure impacts consumer prices which has an affect on the price stability. The figure is expected to have declined from +0.2% to +0.1% on a month-on-month basis, but increased from +2.8% to +2.9% on a year-on-year basis.

Canada will also deliver some information on their Housing starts, which will give us an indication on the strength of the Canadian housing market. The figure will show how many new residential buildings are being built since the end of last month. The number is expected to have declined from 229.7k to 219.0k.

On Wednesday, the United Kingdom will be releasing information on the change of their industrial and manufacturing production on both, MoM and YoY basis. Probably, the change in manufacturing production on a MoM basis will have more significance and will carry more weight. It measures the change in the total inflation-adjusted value of output produced by manufacturers. Manufacturing accounts for about eighty percent of overall Industrial Production. The figure is expected to have slightly risen from +0.1% to +0.2%.

Also, the UK will produce the figures on their overall trade balance and the trade balance with non-EU countries. The first is expected to have improved from -12.33B to -11.90B, whereas the second could go down from -3.87B to -4.40B.

In the eurozone, we have Mario Draghi, who will be delivering a speech at around 12:00 BST, which will be carefully monitored by traders, as it could bring some volatility into the euro pairs.

Later on in the day, the US will release the information on the rate of inflation. The CPI is expected to have risen from +2.2% to +2.4% on a YoY basis. The Core CPI will also be watched carefully, especially by the US Federal Reserve. The rate is expected to go from +1.8% to 2.1% YoY. The Fed believes that core inflation is a better reflection of the price pressures. The Core CPI is more watched than overall inflation, which tends to be more volatile.

After that, investors will be waiting for the release of the FOMC minutes, where everyone will be on the lookout for clues for the next rate hike.

On Thursday, all eyes will be on the Accounts of Monetary Policy meeting, delivered by the ECB, which will provide a broader outlook on the eurozone economy. Last time in March, the ECB came out saying that they will stick to the same strategy and continue running their net asset purchases, currently at 30 billion euros per month, until the end of September 2018. We doubt that there will be any changes in that and that something different might be suggested this time.

From the US, we will get the initial jobless claims number for the past week. But it is doubtful that this will be market-moving news.

Finally, Friday will bring us the German CPI figures, which are expected to have stayed the same as previous at +0.4% and +1.6% on MoM and YoY basis respectively. We will also see some other European countries, like Finland, Spain and Greece, also delivering their inflation figures.

Overall, this upcoming Friday is expected to be rather calm in comparison with the previous one. The only thing that could shake up the market more or less, would be the US-China tensions, regarding the Trade Wars that started escalating last week. 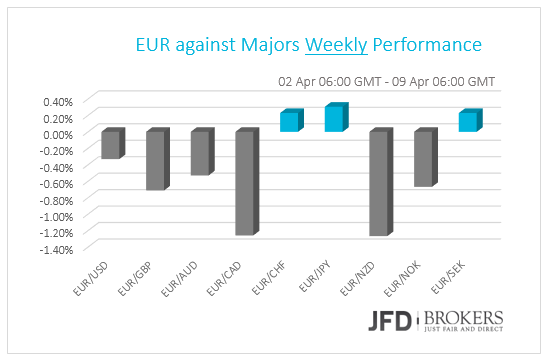 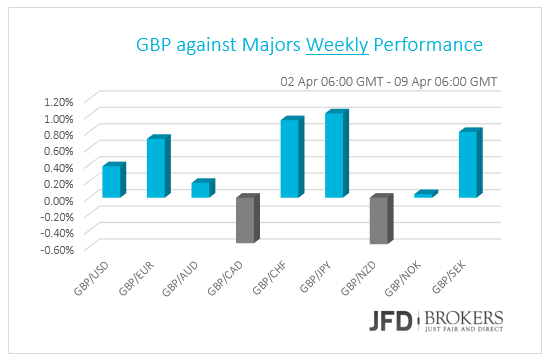 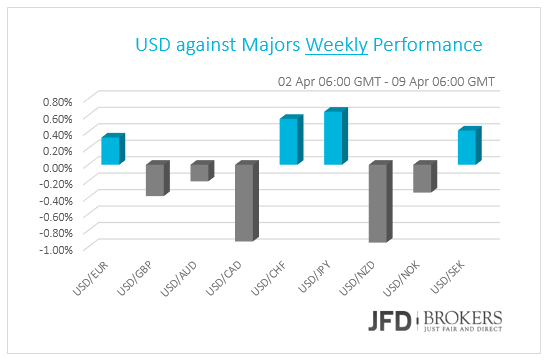