Global factory output and order book inflows continued to rise at some of the fastest rates seen over the past decade in December, according to the latest PMI survey data, indicating a further recovery from the coronavirus disease 2019 (COVID-19) related downturn seen in the first half of the year. The production upturn was led by Germany, followed by Brazil and India.

However, supply delays have also risen sharply to an extent only exceeded on very rare occasions over the past 25 years, as demand outstripped supply and logistics delays intensified. Input prices have also risen at the sharpest rate for nearly two and a half years as a result of these shortages. More encouragingly, business confidence about the year ahead remained buoyant, albeit losing some ground on November amid rising concerns over escalating virus case numbers in some markets. Employment was held steady as the building of new capacity in some firms was offset by caution in relation to expansion in other firms. 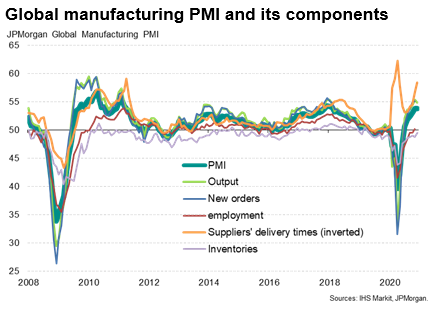 The JPMorgan Global Manufacturing PMI, compiled by IHS Markit from its proprietary business surveys, came in at 53.8 in December, unchanged on November's 33-month high. However, two important components of the PMI - output and new orders indices - both fell slightly from November, as did the employment component, offsetting positive contributions from longer delivery times and a reduction in the rate of destocking.

Having accelerated in November to the fastest since February 2011, global factory production growth moderated slightly in December but the latest expansion remained one of the strongest seen over the past decade. The December increase meant output rose continually over the final six months of 2020, having contracted sharply between February and June. The survey data are broadly consistent with output growing at an annualised rate of approximately 5%.

Note that the latest available official data suggest that global production was running 3.3% below the level of a year ago in September, which compares well with a peak annual rate of decline of 17.8% seen in April.

Having led the global production upturn for two consecutive months up to November, Brazil was pushed into second place in the global rankings by Germany, followed by India. In all three cases, growth rates moderated but remained among the highest seen over the past decade.

The US was the fifth-placed fastest-growing manufacturing economy, behind Taiwan, also seeing growth wane but remain the second-fastest in over five years. Canada likewise saw robust growth, benefitting from rising demand from the US, with output growing at the sharpest rate for over two years.

Above average global growth was also seen in the UK, Ireland and the Netherlands, but these expansions in part reflected a temporary boost from pre-Brexit stockpiling.

Falling output was meanwhile seen in just seven of the 29 economies for which PMI data are so far available for December, with Mexico and Greece again reporting the steepest declines.

Japan was noteworthy in seeing its output stabilise, having contracted continually since the end of 2018. China was also noteworthy in recording output growth that remained close to decade-highs.

Output in Asia excluding Japan and China meanwhile grew at a slightly reduced rate compared to October and November, but the expansion was nonetheless the third strongest since April 2011. 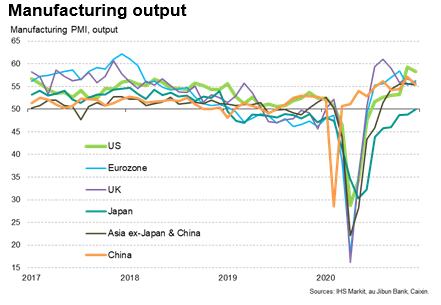 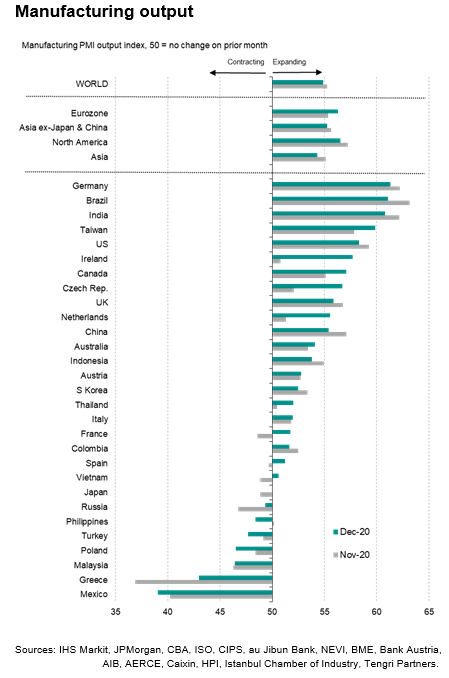 A key contributor to the relatively swift return of robust global manufacturing growth in the recent months has been a revival in worldwide goods trade. 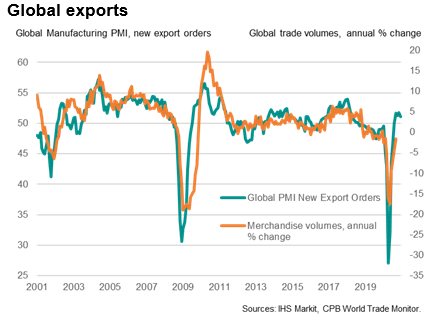 While there were some reports of demand having weakened amid resurgent waves of COVID-19 infections in many parts of the world, notably Europe, output, demand and trade flows were in many cases also constrained by rising supply problems.

With the exception of the supply delays seen at the height of the pandemic in March and April, and the supply issues crated by the Fukishima incident in 2011, the incidence of delays in December was the highest since 2004. Lead times for inputs lengthened in all countries surveyed. The highest incidence of delays was seen in Brazil, followed by the UK, Germany, Australia and the US, though the biggest increase in the number of delays was recorded in Taiwan.

Companies commonly reported issues with a lack of shipping capacity around the world, including a shortage of containers, and frequently reported bottlenecks as suppliers and logistics firms struggled to meet rising demand from manufacturers. 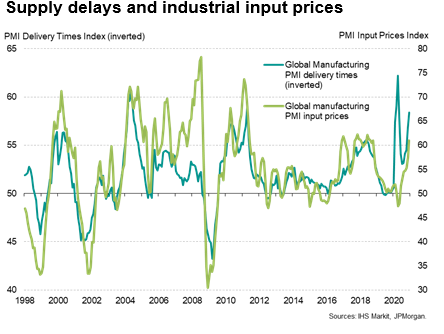 Prices rise at fastest rate in two and a half years

A consequence of supply shortages was higher prices. Manufacturers' average input prices rose in December at the fastest pace since July 2018. Prices have now risen at an ever-increasing rate over the past seven months, haven fallen briefly between April and May amid the slump in demand caused by pandemic-related shutdowns. Often price hikes were simply attributed to increased pricing power among suppliers, but there were also many reports of shipping surcharges.

Manufacturers' optimism about the year ahead meanwhile waned slightly in December, but remained close to the near-five-year high seen in November. Sentiment continued to be buoyed by news of COVID-19 vaccine roll-outs, and has remained especially upbeat in the US following the Presidential Election result, though December saw some increased concerns about the near-term impact of rising virus cases. 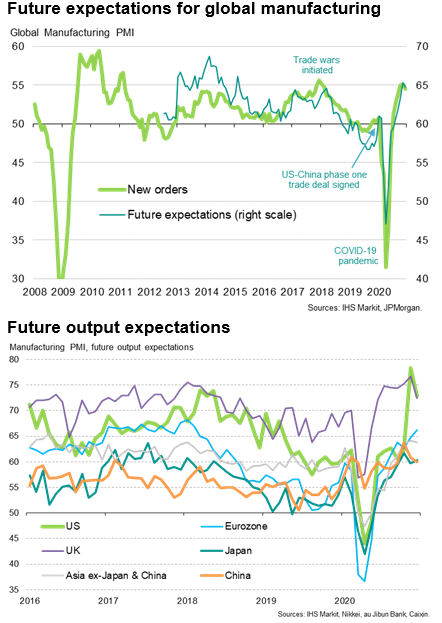 The sustained buoyancy of future output expectations, further robust order book growth in December and shortages of operating capacity (as indicated by rising backlogs of work) all contributed to higher workforce numbers at some firms in December, though many other firms remained either reticent to hire amid the ongoing pandemic or even cut headcounts in order to minimise costs. The net result was no overall change in worldwide staffing levels after a marginal gain in November, though this represents a welcome improvement on the continual drop in employment seen over the prior 11 months. 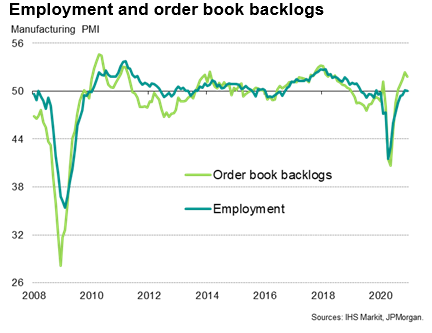 Looking at the major economies, jobs growth was again led by recovering factory headcounts in Canada and the US, as well as in Turkey, Brazil and Australia, followed by a number of European economies. Interestingly, Germany - which reported the strongest output growth in December - also reported one of the steepest falls in employment, behind only the Philippines and Mexico. Job losses were also reported in Indonesia, Thailand, India, Greece, Russia, Spain, the UK, Austria, Malaysia and China, the latter reporting a small decline after strong job gain in November.