Judging by the company’s remarkable turnaround in the third quarter, Facebook (NASDAQ:FB) is set to report another powerful sales number when it releases its latest quarterly earnings tomorrow.

Sales are likely to jump to $26.31 billion, a 21% increase from the same period a year ago, while its profit per share is expected to rise to $3.16 from $2.56 a year ago, according to analysts’ consensus forecast gathered by Investing.com.

Strong digital-ad spending during the holiday season, when buyers did much of their shopping online amid the pandemic, is behind these strong forecasts. And there is no evidence that the social media giant will disappoint on this front. Facebook has a history of giving a cautious outlook, then exceeding expectations.

But despite this improving outlook after a difficult couple of quarters, Facebook stock has been stuck in a range during the past three months. After surging to a record high in August and strongly recovering from the March plunge, FB shares have actually fallen 4% during the past quarter. 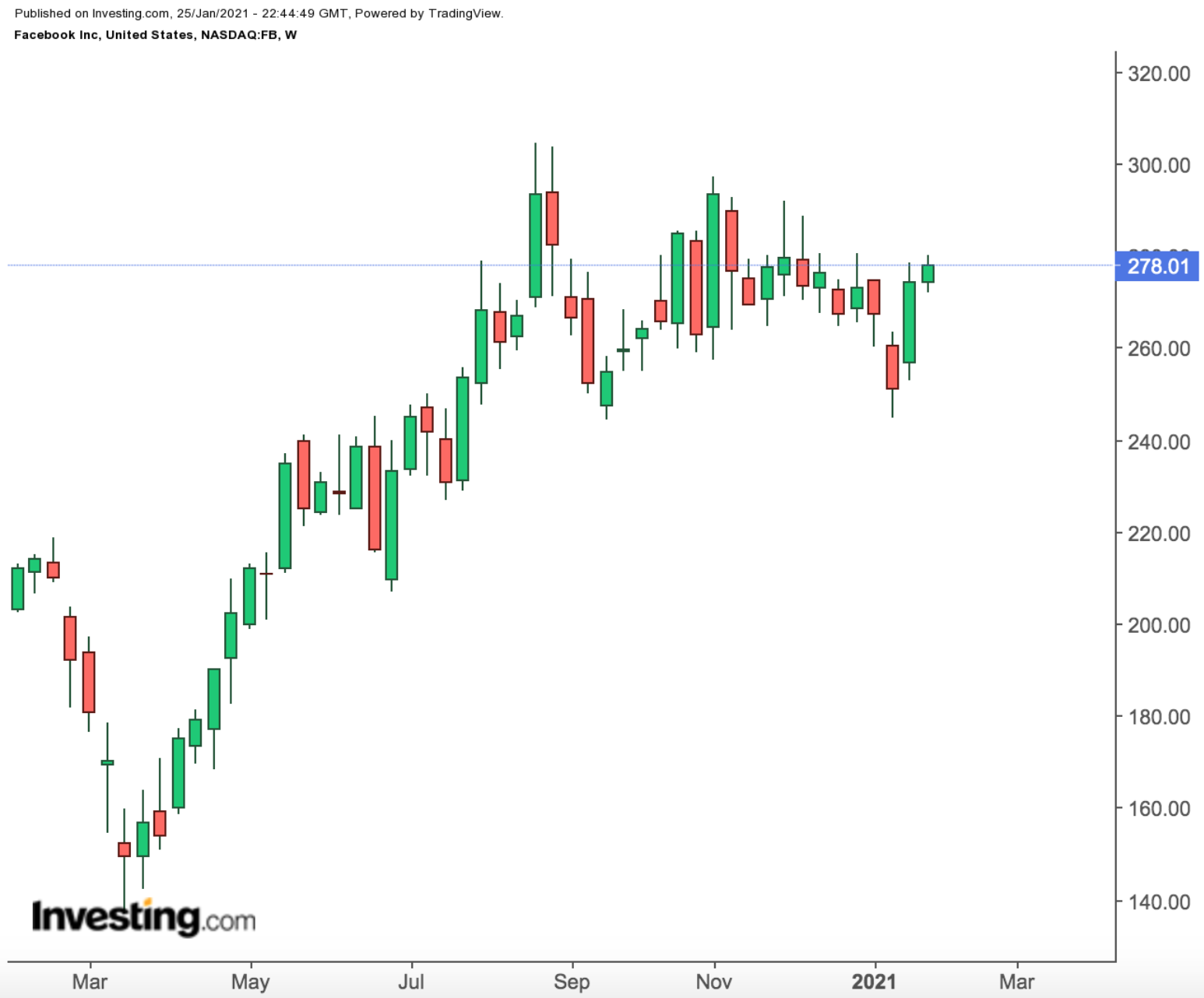 Will another blow-out quarter break Facebook shares out of this sluggish period?

Figuring that out is a bit tricky. The California-based company is facing unprecedented regulatory challenges, which have increased uncertainty about the company’s future.

Facebook was sued in December by U.S. antitrust officials and a coalition of states that want to break up the company, terming its acquisitions of Instagram and WhatsApp unlawful. These deals, according to the government, were part of a campaign to illegally crush competition.

The cases represent the biggest regulatory attack against Facebook in the company’s history. They follow the U.S. Justice Department’s October lawsuit against Alphabet (NASDAQ:GOOGL).

Together, the Google and Facebook actions mark the most significant monopoly cases filed in the U.S. since the Justice Department sued Microsoft (NASDAQ:MSFT) in 1998, according to Bloomberg. Unlike the Google case, the Facebook complaints seek a court order to break up the company.

Amid these regulatory challenges, investors have to figure whether Facebook will be a viable business over the long run. With substantial regulatory threats, Facebook is also facing limitations on how it collects data from users, like those who use Apple (NASDAQ:AAPL) products.

A recent order by European regulators that would prohibit the transfer of European users’ data back to the U.S. is one example. The company is appealing that decision, according to the Wall Street Journal.

“We need new regulation that allows for personalized and relevant ads, while protecting people’s data and privacy,” Chief Executive Mark Zuckerberg said on a conference call with analysts in October. Excessive restrictions on the industry “could have a meaningful negative effect on small businesses, and the economic recovery, in 2021 and beyond,” he said.

Beyond these regulatory risks, the company is in an enviable position to leverage the shift to online commerce spurred by the pandemic. The company’s operating margin stood at 37% by the end of Q3, a number that many Wall Street executives can only dream about. The number of people using Facebook products each month—which include Instagram, Messenger and WhatsApp—increased to 3.21 billion from 2.82 billion a year ago.

Despite the negative publicity, Facebook stock is holding up well. This shows the underlying strength of the company’s business and its strong competitive moat. Given that a fair amount of regulatory risk is already built into the stock, we find FB an attractive pick for long-term investors who have the stomach to tolerate the regulatory actions that could take years to get resolved.