European equities opened firmer again on Thursday morning, extending gains from a very strong session on Wall Street. France’s CAC led the way after President Macron announced an extra €100bn stimulus package over two years. Remember the EU’s bailout fund is still to be delivered. The FTSE 100 moved back towards the 6,000 level as the pound came under further pressure from a resurgent dollar.

US equity markets jumped – the Dow and S&P 500 both rallied more than 1.5% on another strong day for equities. But Vix futures show no signs of backing down either, which indicates fears about the sustainability of the rally. Technical indicators are stretched too – the 14-day relative strength index is flashing a warning light at above 80 for the S&P 500. Many of the top stocks like Apple (NASDAQ:AAPL) are also trading above 80 on the RSI. Salesforce and Apple fell, but there were otherwise broad gains for the Dow, with the likes of IBM (NYSE:IBM) and Coca-Cola (NYSE:KO) leading the way. Tesla was down 5% after its stock sale announcement. Apple remains +20% over the last month, representative of the wider tech trend, which remains strong.

Citi this morning upgraded their call on Value stocks from ‘neutral’ to ‘positive’, however they caveat this by saying they mean Value ex-Financials. Whilst rising inflation breakevens favour cyclical value stocks, low nominal rates continue to weigh on financials.

The S&P 500 continued to extend above its long-term weekly trend line (in red) and is really starting to push the envelope to breaking point. 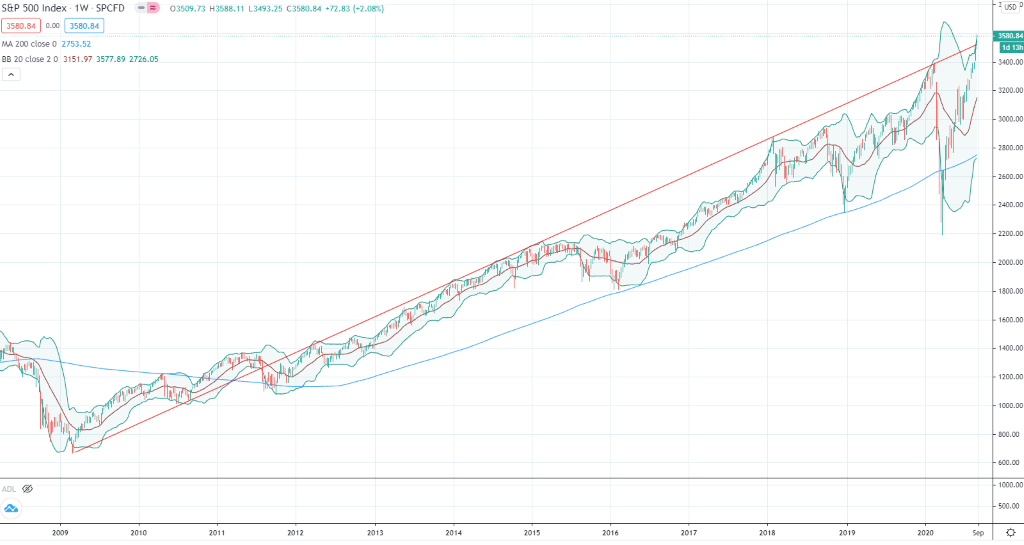 VIX futures (Sep) are extending higher but the sharp contango between the front and back months is extreme with October printing above 35. This risk premium implied by the options market is simply not being reflected by equity markets. 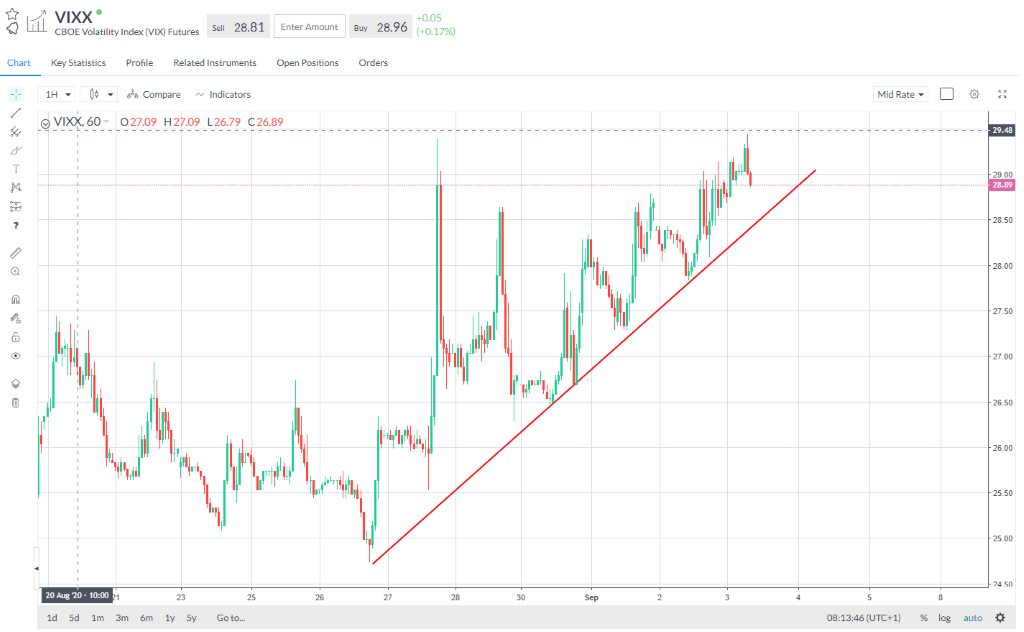 Economic indicators continue to show a slow recovery. The Fed’s Beige Book – an anecdotal snapshot of businesses across the US - noted that “activity remained well below levels prior to the COVID-19 pandemic”. PMIs continue to show a slowdown in August – following some softer European numbers, China’s Caixin services PMI slipped to 54 from 54.1 last month. Italy’s services PMI slipped to 47.1 in August from 51.6 in July, indicating businesses think things are getting worse, not better.

US jobs numbers were poor – the ADP (NASDAQ:ADP) report showed the US private sector added just 428,000 jobs in August, which was less than half what was forecast. It bodes ill for Friday’s nonfarm payrolls report. Today’s initial claims number is forecast to come in under 1m, but the slow pace of jobs growth relative to layoffs earlier in the year continue to point to a very long, slow recovery in the labour market.

On a happier note – the New York Times reported that the US Centers for Disease Control and Prevention informed officials to get ready to distribute a potential coronavirus vaccine as early as October. There are several candidates are in the running and there is clearly a lot more confidence we will have a vaccine and be able to declare victory over Covid.

Sanofi (PA:SASY) and GSK announced today the start of their Phase 1/2 clinical trial for their adjuvanted Covid-19 vaccine. If the trials are positive, the companies aim to move into a Phase 3 trial by end of 2020 and target producing up to one billion doses in 2021.

Yesterday, betting markets turned in favour of Donald Trump being re-elected. The RCP average showed Trump +0.1pt over Biden at 49.8 to 49.7. Whilst clearly too close to call, the speed at which Trump has narrowed the gap shows how quickly things can change. Betting markets are not, however, the same as polls. They are only market participants’ best guess at what the outcome will be.

But polls also show a tighter race. On a national level Trump is polling better than at any time since May and has eaten into Biden’s clear lead, which remains strong. However, looking into the key battlegrounds where we know the fight will be bitterest and where it really counts, the lead Biden has is also narrowing and now well within the margin for error area. The RCP data showed Biden at +2.6 in the top battlegrounds, having been more than +6pts in July. By Thursday however, Biden bolstered his lead again to +3.3 in the battleground states. Suffice to say, the race is going to be very close. Increasingly we see the biggest risk to market stability being a disputed election result, which would considerably dent risk appetite going into the end of the year. Will President Trump resist leaving the White House? Will Biden refuse to concede on the night goes against him even if the vote on the night goes against him? Lots of risks ahead. A clean sweep for the Democrats would mean more regulation and more taxes.

Yields have come back down to pre-Jackson Hole levels with US 10s back at 0.647%. Gold slipped further from the Tuesday swing high towards $1930 and again contending with long-term trend support.

The dollar notched further gains – GBPUSD has retreated to take a 1.32 handle and EURUSD briefly taking a 1.17 handle again. The unwind for these pairs has been sharp but it still looks to be a tough period for USD.

Oil settled lower at its weakest in a month despite a large draw on oil inventories. WTI slipped to $42 as the temporary nature of the shut-ins from Hurricane Laura failed to offer support. The EIA said US crude inventories fell by 9.4m barrels for the week ended Aug 28th, after the API had reported a drop of 6.4m barrels.