Eight Markets To Watch If The Coronavirus Outbreak Worsens

Eight Markets To Watch If The Coronavirus Outbreak Worsens

Earlier today we outlined the one big reason that traders may still be underestimating the risks from coronavirus, noting that, “at its current growth clip, coronavirus could exceed the SARS infection figures by Wednesday and more than double them by Friday.” While time will tell if and when authorities are ultimately able to contain the outbreak, traders are already starting to position for an adverse scenario.

Below, we highlight eight markets that are already moving in response to the coronavirus epidemic:

The world’s ultimate safe haven asset is fulfilling its normal role during times of uncertainty, with the yellow metal trading about 0.5% higher as of writing and on track for its highest close since 2013.

Both major oil contracts are falling by about -2% on the day to hit their lowest levels in nearly 3 months. Obviously, any contraction in economic activity could decrease demand for petroleum, which is also plagued by oversupply issues despite production cuts from OPEC.

As my colleague Joe Perry noted earlier today, the risk-off move is driving traders out of growth-sensitive major currencies such as the Australian and New Zealand dollars and into perceived “safe haven” currencies including the Japanese yen and Swiss franc. As such, crosses like AUD/JPY and NZD/JPY may be particularly vulnerable among the G10 currencies, with emerging Asian currencies like the Singapore Dollar, Indian Rupee, Thai Bhat, and Russian Ruble potentially seeing spillover volatility.

In addition to China, many emerging market funds have heavy exposure to other fast-growing countries in Southeast Asia that could be hit disproportionately hard by further limitations to travel and commerce. To take just one prominent example, the $31B iShares MSCI Emerging Markets ETF (NYSE:EEM) is trading off by -3% on the day.

Analysts have noted that the untimely closure of Shanghai Disneyland and many theatres across the country could impact Walt Disney Company (NYSE:DIS) (DIS, -2%). Similarly, Starbucks (NASDAQ:SBUX) (SBUX, -3%) has closed all of its stores in the Wuhan and Hubei provinces. In more traditional consumer goods, Nike Inc (NYSE:NKE) (NKE, -2%) derives more than $6B in revenue from Greater China and could be particularly vulnerable following last year’s tensions surrounding the NBA.

Fearing the potential negative impact on travel and tourism, traders are selling airline stocks aggressively. Among the three major US airlines, each of Delta (DAL, -3%) American (AAL, -5%), and United Airlines (UAL, -5%) are shedding more than 3% on the day. Chinese-based airlines like China Eastern Airlines (NYSE:CEA) (CEA) and China Southern (NYSE:SO) Airlines (NYSE:ZNH) (ZNH) have sold off by -7% as of writing

Of course, the outbreak will also create a number of short-term winners, primarily among firms producing safety equipment for medical workers and other citizens. Names in that space include Alpha Pro Tech (NYSE:APT) (APT, +19%), a mask manufacturer, and Lakeland Industries (NASDAQ:LAKE) (LAKE, +10%), which creates protective clothes for high-risk workers. 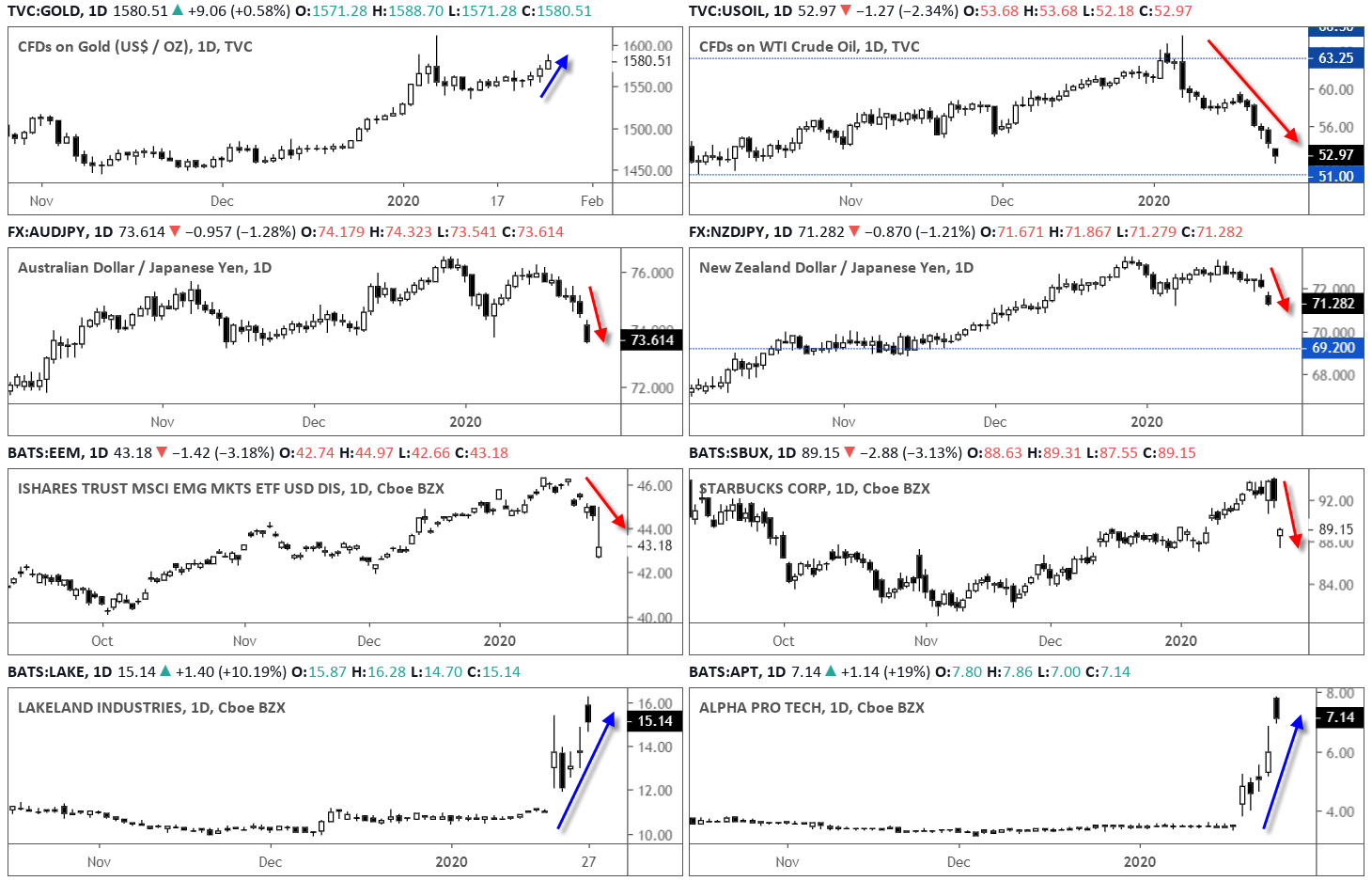