Markets have opened on Monday in a state of renewed limbo again. There is still a lack of real detail or progress of note for the US/China “Phase One” of a trade agreement. However, the major damp squib has come from the “Super Saturday” session of UK Parliament which has failed to provide markets with any further clarity of whether the UK will be leaving the EU on 31st October or not. MPs opted instead to request Prime Minister Johnson to ask for an extension to Article 50, which he did so with the enthusiasm of a recalcitrant child asked to eat their vegetables. Akin to hiding his carrots under the cutlery, Johnson refused to sign his name to the letter. How the EU responds will be interesting now, but the letter has further reduced the likelihood of a “no deal” Brexit.

Sterling has dropped amidst the cloud of uncertainty, but has avoided any huge moves that could have come from a decision of any conviction actually having been made by the UK Parliament. Broad market sentiment also reflects a lack of direction, as Treasury yields continue to crab sideways, and commodities consolidate. There has been an element of dollar slippage in recent days, as yields on Bunds and JGBs (and to an extent Gilts) remain on a positive trend, but this has also stalled today.

Wall Street closed lower on Friday with the S&P 500 -0.4% at 2986, whilst US futures are a shade higher today at +0.1%. Asian markets have been mixed, with the Nikkei +0.3% whilst the Shanghai Composite is -0.4%. European markets seem set to add to the caution with FTSE futures all but flat and DAX futures +0.1%.

In forex majors there is a mixed look to USD across the majors, gaining against EUR and JPY whilst AUD and NZD are mild outperformers. The main mover has been GBP weakness, although sterling is off the lows of the day.

In commodities, gold and oil are mixed again.

There are no key data announcements on the economic calendar today.

Chart of the Day – AUD/USD 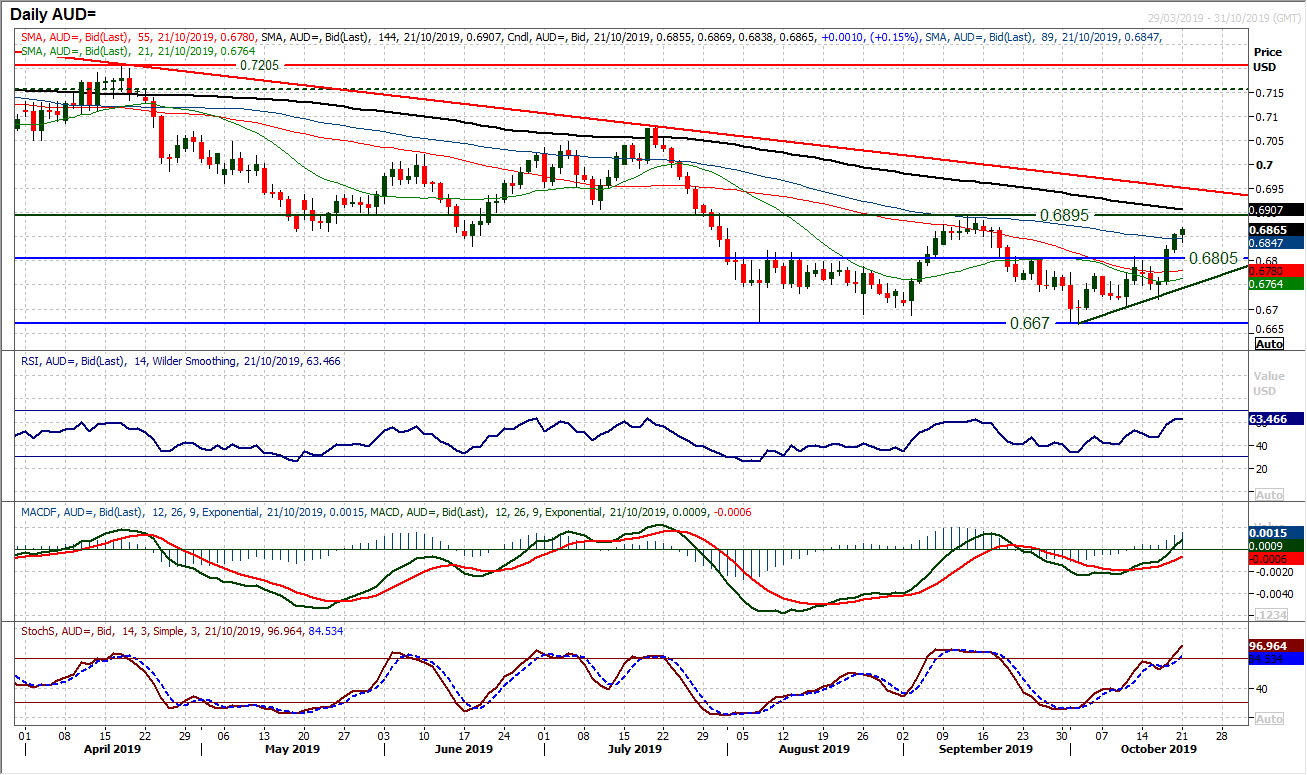 Improved performance of the Aussie has been a slow burn in the past couple of weeks, but has really taken off in recent sessions. Higher lows and higher highs have significantly improved the outlook and now Thursday’s strong bull candle breakout above $0.6805 is a key move that opens a test of the $0.6895 key September high. Positive momentum indicators are driving the move, with the RSI pushing into the 60s, Stochastics strongly configured and MACD lines accelerating higher. The breakout at $0.6805 is effectively a pivot line of the past few months and is now a key basis of support to use to buy into weakness, whilst the hourly chart shows $0.6800/$0.6820 as a near term band of support. There is little real resistance until the $0.6895 high. A test of $0.6895 will be crucial for the medium term outlook and the bulls are positioning well for the test.

The outlook for the euro has been improving decisively throughout October and has really taken a step forward with the breakout above the old September highs of $1.1100. This was a first really important resistance (of a lower high) overcome which opens the development of a new trend higher. The next move is a test of the $1.1165 late August high which the market had a look at on Friday and is again considering today. The $1.1165 resistance is also an old pivot line which was the basis of a consistent turning point through the summer months. Breakout opens $1.1250. There is a position of strength which points towards buying into weakness now, with the RSI into the high 60s, MACD lines accelerating above neutral today and Stochastics strongly configured. The breakout above $1.1100 is a prime support area now, whilst the hourly chart shows $1.11100/$1.1130 as a near term band of support. 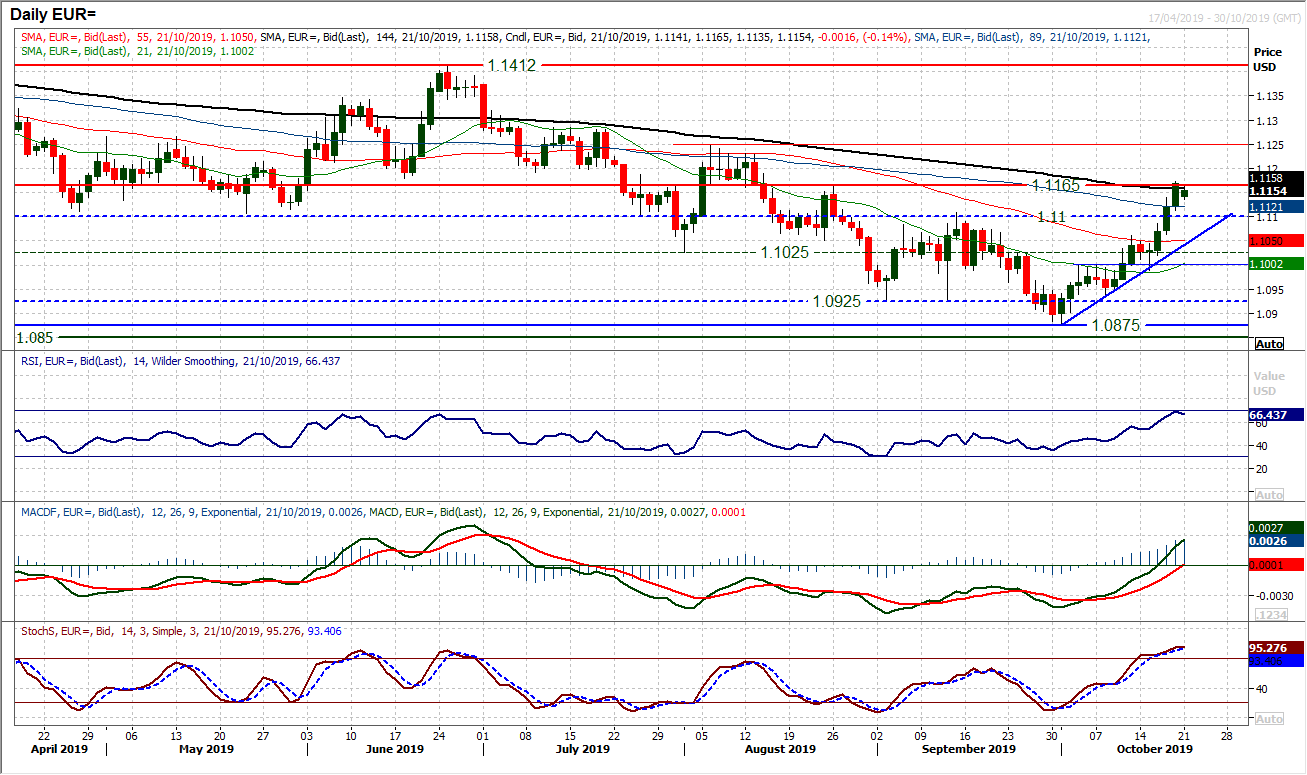 With the outlook for Brexit before the 31st October supposed deadline for Article 50 being more clouded than ever today, there is an early slide back on Cable. Sterling has been hugely strong over the past eight sessions but the market has also seen significant intraday volatility along the way. Technically the run higher is looking strong but the threat of a corrective move is still present. A close back under Thursday’s close of $1.2890 would question the continuation of the current run higher. Repeatedly we have seen corrections bought into for recent sessions. Therefore a breach of Friday’s low at $1.2835 would be a corrective signal now. The hourly chart is again testing the support of a now six session uptrend, with the 55 hour moving average supportive at $1.2875. Resistance initially at $1.2960, whilst $1.2985 has been tested twice in the last two sessions and is holding as a barrier. 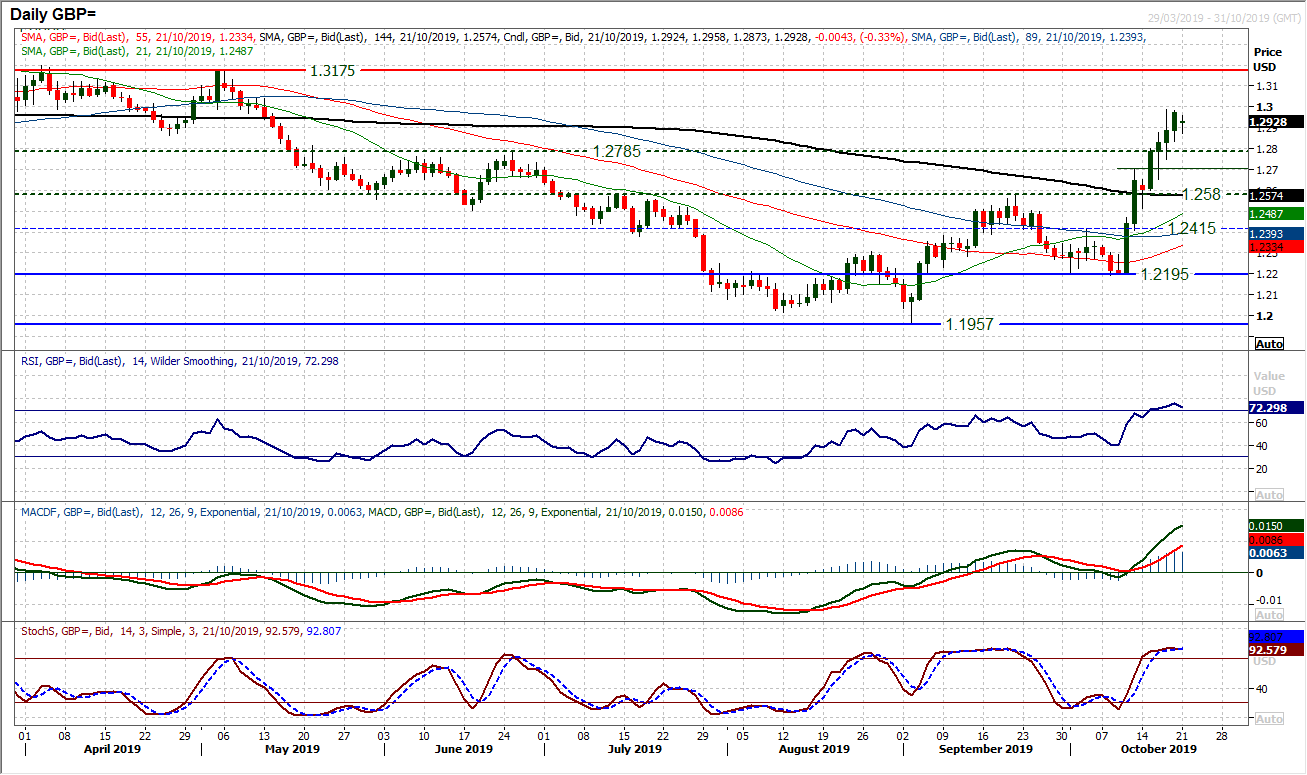 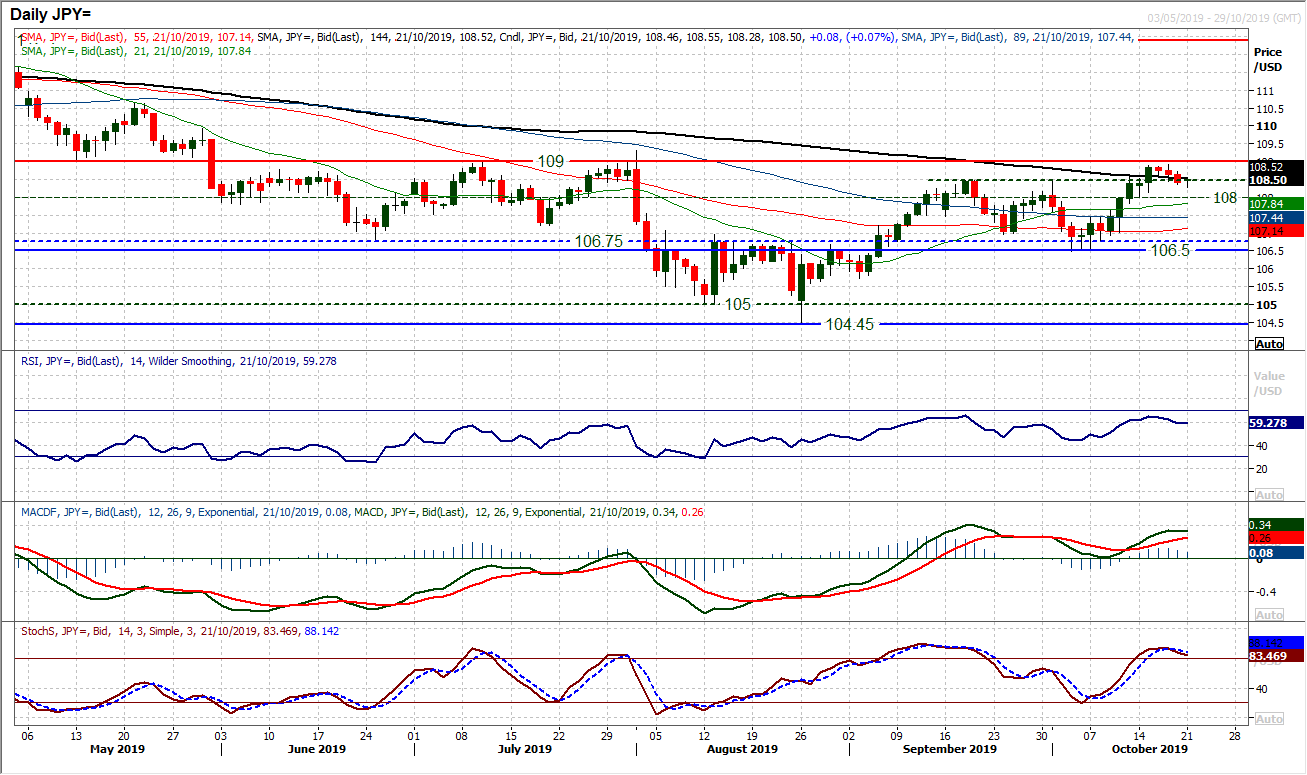 The dollar remains under pressure after a third negative session ended last week with a run of candlesticks beginning to find corrective traction in the roll over on USD/JPY. Failing under the resistance of the medium term pivot at 109.00, the bulls have taken a step back. The question is whether this is a drift back that becomes a chance to buy for renewed pressure on 109.00, or whether it is the beginning of a deeper corrective move within what would be the scope of a six week trading band. Losing the breakout support at 108.50 on a consistent basis would be a blow for the bulls, but the hourly chart shows there is a higher low support at 108.00 which if lost would signify a bigger swing lower. The daily Stochastics have rolled over (but no confirmed sell signal yet) and the RSI is back under 60, so there is certainly a waning of momentum. The hourly chart also shows how previously positive configuration is now beginning to look at best neutral but could be taking on more of a corrective look if 108.00 support were to be breached. The hourly RSI consistently under 60 would add to growing negative momentum. Friday’s high of 108.70 could also now be a lower high under 108.95.

The subdued outlook for gold continues to progress. Gold traded in a tight $20 range for the whole week. Considering the Average True Range is $20 for a single session, this reflects the state of consolidation on the market. However, the resistance is still in place at $1497 and under $1500 which gives a slight negative bias to the outlook. The downtrend of the past six weeks is still intact (today falling at $1510) and momentum indicators are a shade under their neutral positions. However, whilst the support band holds between $1458/$1481 there is little real direction to speak of. This is a market that has become marooned by uncertainty and is desperate for direction. Above $1497 would be a mini break higher and imply $20/$23 of upside projection. Initial support at $1483. 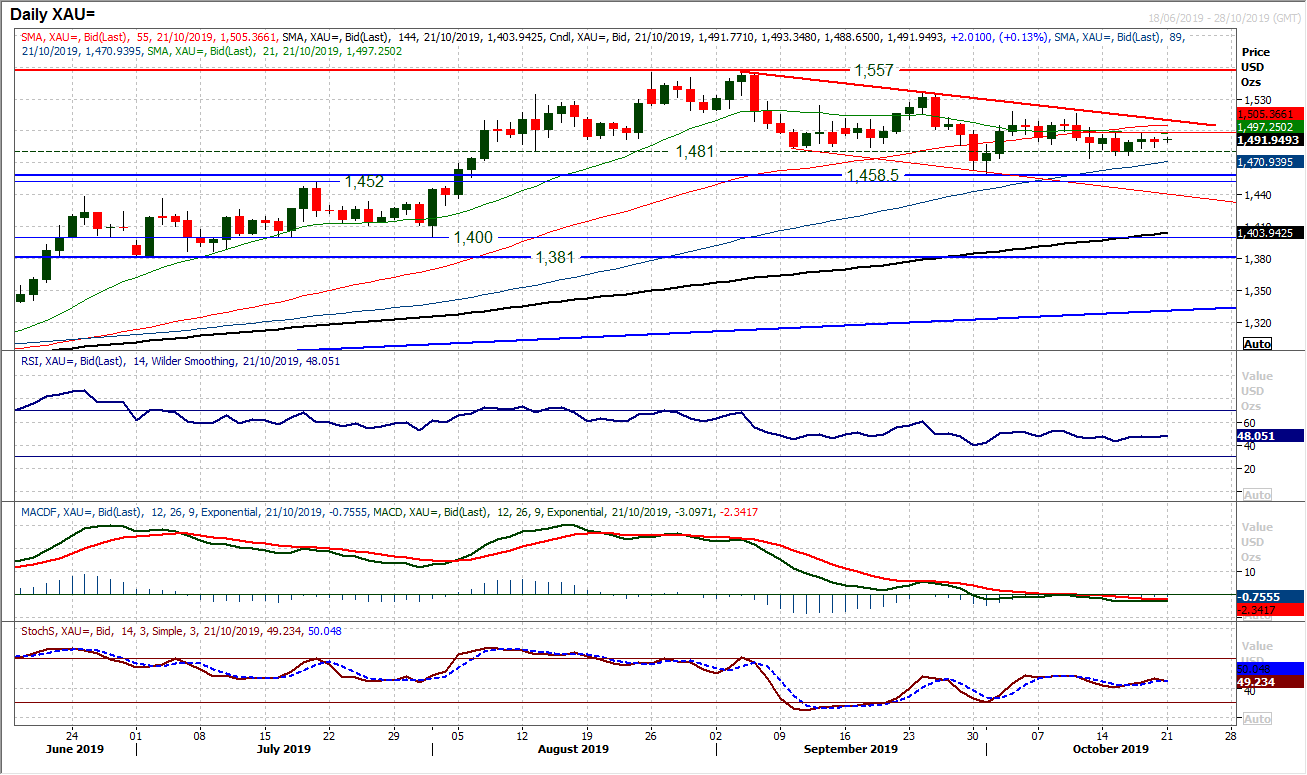 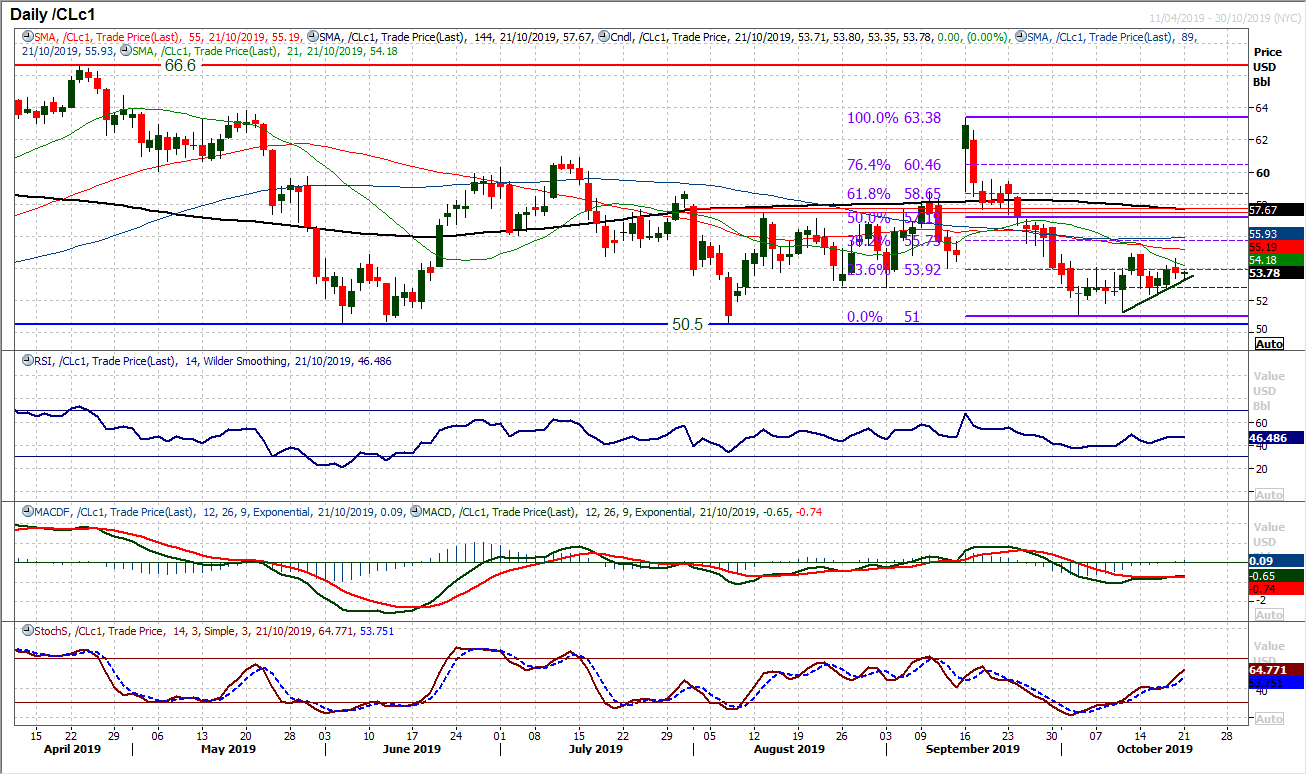 Oil is another market that has been a real slog in the past couple of weeks. False signals and lacking conviction, the market has developed into a range between the support at $51.00 and resistance at $53.95. Within that, the market appears to be drawn back repeatedly to a range between $52.85 and the 23.6% Fibonacci retracement of $63.40/$51.00 at $53.90. There is the sense that the hourly chart is showing a very slight positive bias now though and if the bulls can build with a positive candlestick today then there could be a degree of direction starting to pull in recovery. For now though, it is wait and see for confirmation/conviction. 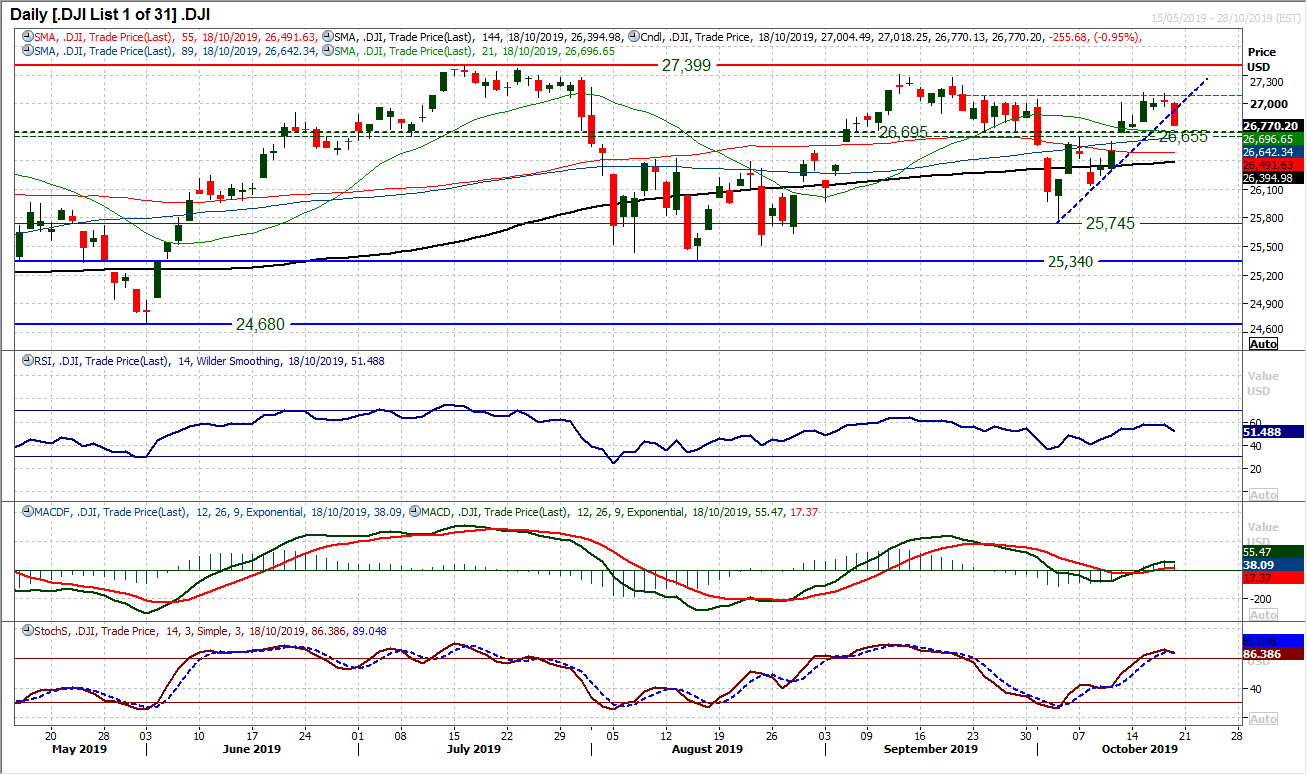 The stalled rally has now turned into reverse as a decisive and solid negative candle cut over -250 ticks off the Dow and broke a two week uptrend. For over a week now we have been talking about the importance of a breakout above the pivot band 26,655/26,695 and once more this comes in to be tested. This will be an important moment for the near to medium term outlook as if this pivot is now decisively breached it would suggest that the bulls have lost control and another retreat within what is now a medium term broad trading range between 25,340/27,399 will kick in. Momentum indicators are threatening to roll over again. RSI below 50 along with Stochastics bear crossing and MACD lines back under neutral would confirm the medium term range of c. 2050 ticks. The hourly chart shows resistance now 26,955/27,120.