Bitcoin And The Demise Of The “Digital Safe Haven” Narrative

Bitcoin And The Demise Of The “Digital Safe Haven” Narrative

There is no alternative [to equities]”

“Interest rates have nowhere to go but up from here”

There’s no shortage of market narratives that have collapsed over the last two months, but for cryptocurrency traders, the implosion of the “bitcoin as a digital safe haven” meme may be the most significant.

Like just about every other major asset, with the possible exception of US treasury bonds, traders dumped digital currencies relentlessly earlier this month in a mad dash to raise cash (specifically US dollars) from any liquid asset. At least when it comes to “The Great Cessation” of economic activity as countries across the globe shutter in unison, Bitcoin has served as a poor store of value in recent weeks.

Of course, the massive response from both fiscal and monetary policymakers should theoretically benefit Bitcoin in the long run. After all, the cryptocurrency’s hard-coded cap on supply of 21M bitcoins and relatively low new issuance (poised to drop below 2% after May’s “halving” of the supply) contrasts more starkly than ever with the profligate spending and money “printing” from major governments and central banks. That said, investors tend to focus on quality and cash flows through recessions, so they’ll likely be reticent to aggressively bid up a barely 11-year-old digital “asset” that has seen repeated drops in excess of -70% in its short life, including over the last 9 months!

In any event, Bitcoin has at least stabilized over the last couple weeks after the panic-driven mid-month collapse to below $4,000, with the Fed’s aggressive liquidity injections playing a role (astute traders will note that gold has also rallied strongly in recent days). From a technical perspective, the cryptocurrency is still trading below its 21-day exponential moving average, a proxy for the short-term trend, as well a key previous-support-turned-resistance level at $6600: 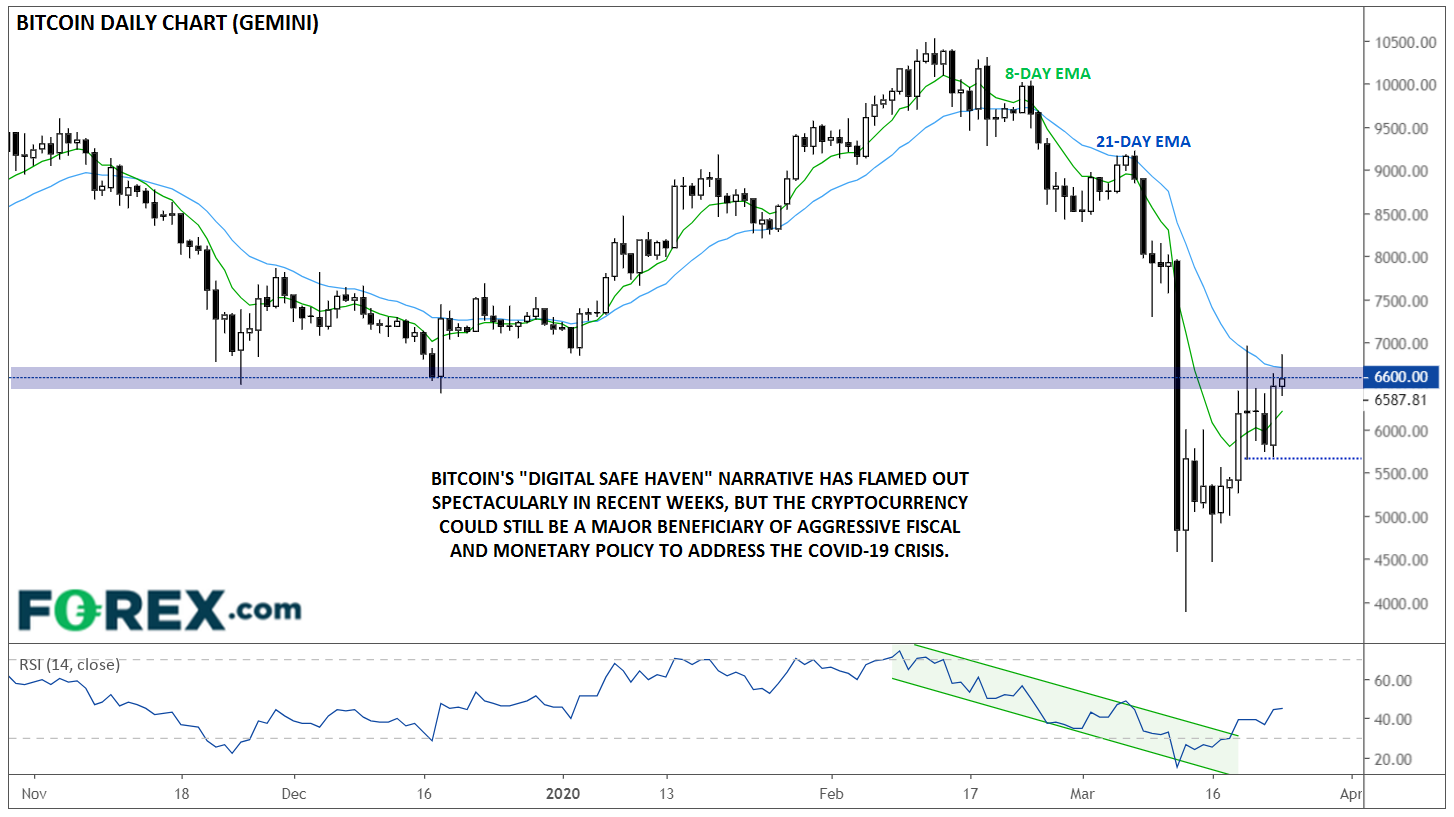 In the short term, continued consolidation below $6600 resistance would be seen as a bullish, especially if equity markets and risk appetite more broadly turn lower again. Of course, a confirmed break above this level would be a strongly bullish sign and could suggest that traders are recognizing Bitcoin’s potential, even if the “digital safe haven” narrative has failed this test. Finally, a break back below the weekly low around $5700 would be a bearish development and could foreshadow another leg lower toward $5000 again.