Aurora Cannabis Paying Price For Missing Its Own Revised Guidance

Aurora Cannabis Paying Price For Missing Its Own Revised Guidance

Shares of Aurora Cannabis (NYSE:ACB), (TSX:ACB) took a slightly-more-than-8% tumble yesterday, compounding last week’s drop of about 9% after the Edmonton-based marijuana grower reported disappointing fourth-quarter earnings after the closing bell Sept. 12. The stock closed yesterday at US$5.45 in New York and C$7.24 on the S&P/TSX Composite, claiming the title to the worst performing stock on the main Canadian exchange on the day.

The company, which is now recognized as the biggest cannabis producer in Canada, failed to meet not only analysts’ expectations last week but missed its own revised guidance, which had been lowered in early August. 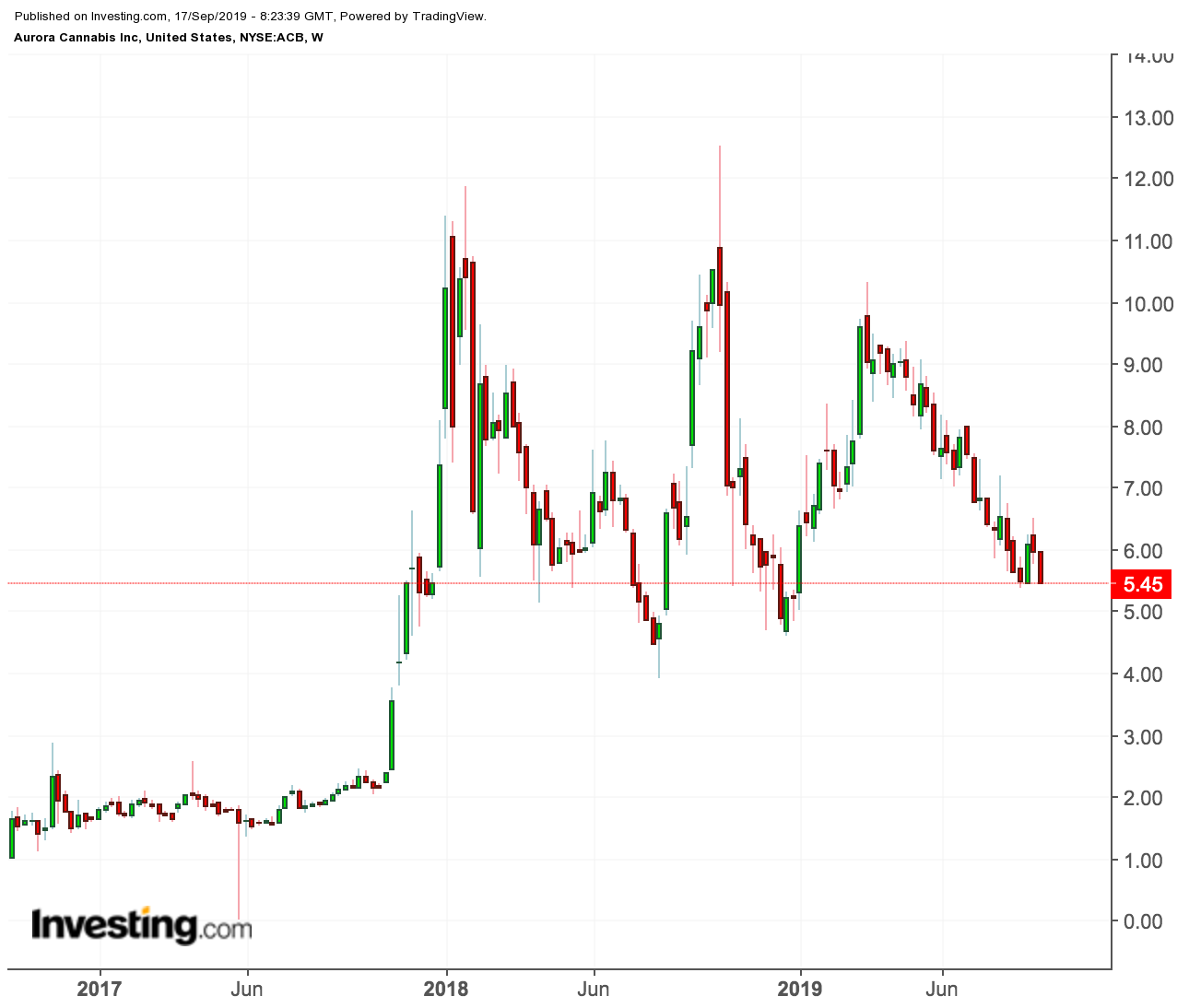 The company also reported a loss before interest, taxes and depreciation of C$11.7 million (US$8.83 million), not quite the prediction of a non-adjusted profit, which Aurora officials had targeted for this quarter.

In a televised interview, Aurora’s chief corporate officer Cam Battley said the revenue shortfall “shouldn’t have happened.” He went on to explain that the shortfall can be traced to “non-core” revenues, which included analytical testing and patient counselling.

Aurora officials also did a little finger pointing at the persistent problems with the slow roll-out of licensed cannabis retail shops in Canada to explain the revenue figures. But company officials are optimist that the roll-out of the so-called 2.0 cannabis products – the oil, topicals and edibles – which will be legalized in Canada next month and scheduled to be available at the retail level by mid-December, will be much smoother given the retail network already in place.

The one metric from the latest earning report that slipped by with little fanfare that investors might want to keep an eye on is that fact that Aurora made it clear that it can firmly claim the title of the largest Canadian cannabis producer, in terms of volume grown, sales and revenue, surpassing the other big name in Canadian cannabis ­– Canopy Growth (NYSE:CGC), (TSX:WEED).

Aurora’s sales from the last quarter almost doubled. In comparison, Canopy Growth’s sales were stagnant. And Aurora is making gains in all sectors – medical, recreational and bulk sales, putting the company on a sound diversified footing.

How Aurora managed to become the sales leader was clear – it bought its way to the top. It purchased well-performing companies that had proven growing operations, and in doing so eliminated them as possible competitors. These companies included Medreleaf, Cannimed and Whistler Medical. This route to expansion came at a cost, though. Aurora has C$640 million (US$483.10 million) in debt and a healthy C$314 million (US$237 million) in operating losses.

The market reaction to Aurora’s results has been clear – investors are not pleased. The unavoidable question looms large: When will it show a profit? It’s the same questions that casts a shadow over the entire sector and serves as a measure of investors’ patience running thin.

But Aurora provided an answer. Again, given the market’s reaction and the hit the company’s stock price has taken, investors did not like it too much. In a televised interview Michael Singer, the company’s executive chairman, said profitability could be reached by the second half of 2020, but he added a few caveats which all dealt with a retail sales improvements and a smooth edible and derivatives roll-out.

CannTrust To Be Delisted Sept. 23

As anticipated, CannTrust Holdings (NYSE:CTST), (TSX:TRST) will be removed from Canada’s main stock exchange index, the S&P/TSX Composite, on Sept. 23. The beleaguered Ontario-based cannabis grower has been in a freefall since earlier this summer when it was revealed it had been growing cannabis in unlicensed rooms in its greenhouses in Pelham, Ont.

That was the beginning of the downward spiral, with the company’s stock sinking lower with every subsequent news report unearthing a deeper and deeper scandal. Now, the company awaits word on whether Health Canada will revoke its growing licences.

The news of the pending delisting, released late last Friday, caused the stock to fall again yesterday, losing about 7% on both the New York and Toronto stock exchanges. It closed yesterday at US$1.50 (C$1.99) 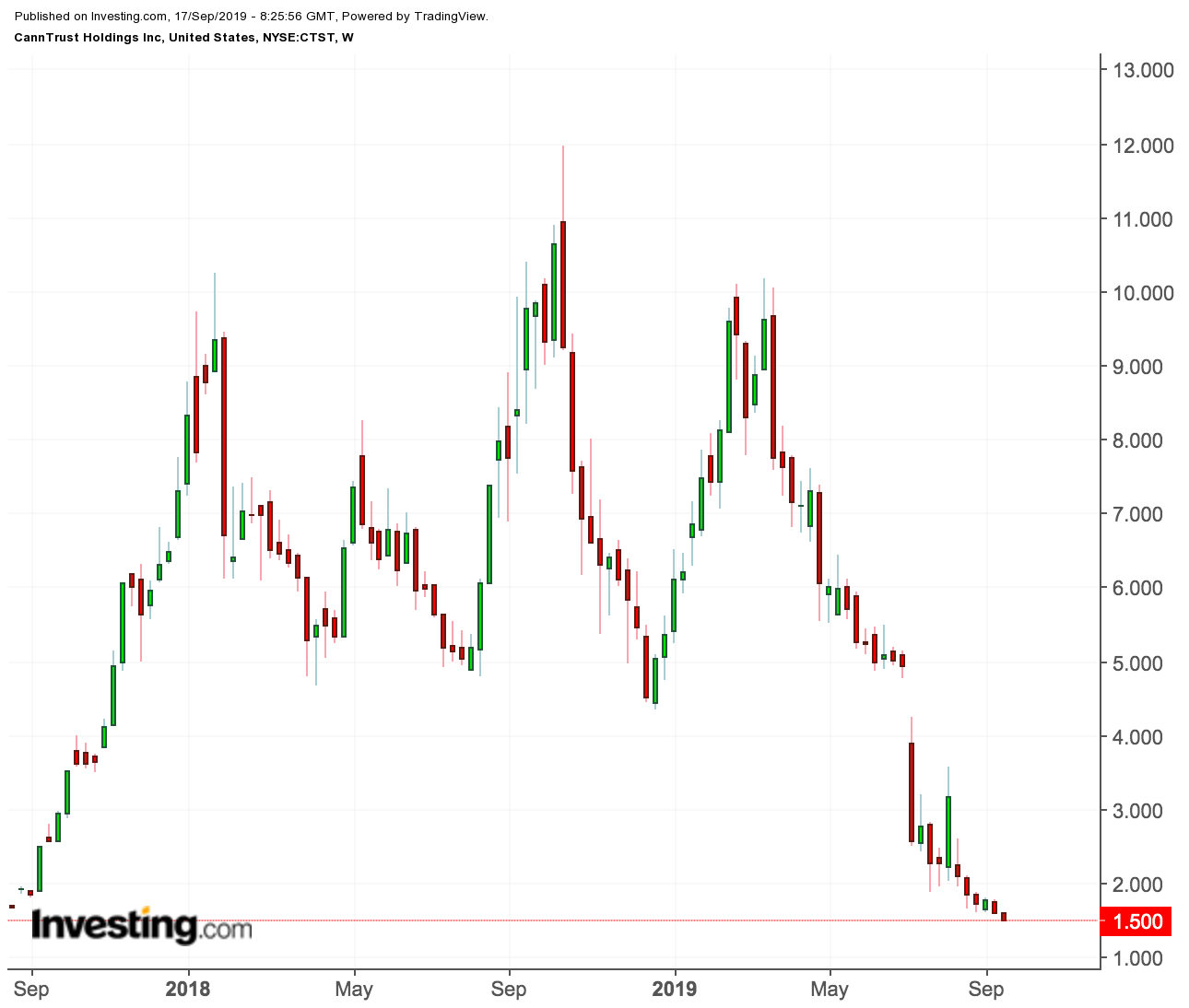 CannTrust’s delisting comes about 18 months after it was added to the TSX in March 2018. Inclusion on the exchange requires a company’s shares available for trading, or float, to be 0.025% of the total value of the index. That figure usually hovers around the C$500 million (US$377.42 million) mark. CannTrust’s market cap has tumbled to C$281.55 million (US$212.53 million).