When Apple (NASDAQ:AAPL) reports its fiscal 2020, Q3 earnings later today, investors will be looking to justify the 70% rally in the company's shares since the March dip. The speed and magnitude of this rebound suggests the iPhone maker will have a solid case to satisfy bulls. 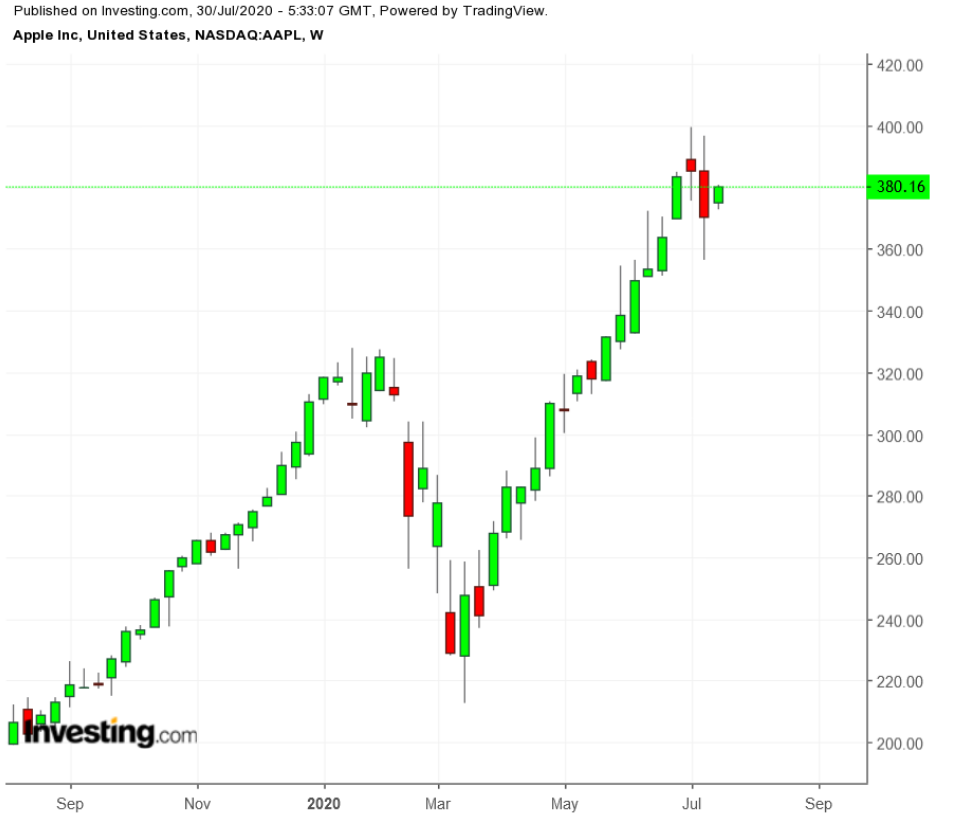 The Cupertino, California-based company is well positioned to weather the pandemic-triggered downturn, helped by its services business, wearable products, and its stock buyback program.

While iPhone sales took a hit when 450 of Apple's stores were forced to close worldwide during the lockdowns, services and wearables segments proved to make the difference for the company's bottom line.

Those divisions, which include App Store sales and AirPods wireless earbuds, surged 18% to $19.63 billion in the previous earnings period. Meanwhile, sales of legacy products—the iPhone, iPad and Mac—fell nearly 7%.

Along with strong momentum in the company’s services business, investors are also hopeful that Apple is still driving innovation along with new ways to use technology hardware and software in order to fuel sales once the pandemic is contained.

Last month, Apple introduced an array of software additions to its family of gadgets, including the most drastic changes to the iPhone home screen since the product’s release in 2007. Users will be able to add widgets that sit between the typical grid of apps, which can be set to varying sizes and present information, such as the weather or a calendar, which will update throughout the day. The Apple Watch will get sleep tracking and hand-washing detection tools.

Among the changes, the most exciting was Apple’s decision to sell Mac computers using processors designed in-house, replacing Intel (NASDAQ:INTC) chips. The first Macs with Apple's own chips will be available by the end of the year.

For users, this means future Mac units will be a lot more like the iPhone or iPad. Its battery life should be longer and the performance better. In addition, the new Mac iteration will have the ability to run iPhone and iPad apps natively.

With future innovation in focus, it’s likely investors will ignore possible weakness in the sales of iPhones and the Apple Watch due to lockdowns and temporary store closings.

The company also predicts sales of its internet services, as well as Mac computers and iPads, have probably grown, as more people remain largely confined to their homes.

Still, it would be wise for investors not to ignore potential risks that could hinder Apple’s near-term growth, especially when the global economy remains in a recession and the COVID-19 pandemic continues to rage.

Keep an eye on whether users are hanging on to their phones longer, or remain keen to upgrade even when the economic environment is harsh. Also note that while announcing its Q2 earnings in April, Apple didn't provide guidance, the first time in more than a decade this has occurred, due to the ongoing disruptions from the pandemic.

There's a good chance the company's Q3 earnings report could disappoint Apple bulls due to the headwinds in the current uncertain economic environment. But any dip in Apple shares, in our view, should be taken as a buying opportunity, given the company’s strong global brand, cash position, and its push to diversify its revenue stream.