With Germany's export-dependent industrial sector—which accounts for about a fifth of its economy—already in decline, Europe's economic engine may already be in recession. Worse still, the slump looks to be spreading beyond the well-known troubles of the country's automotive sector.

The Munich-based Ifo Institute for Economic Research anticipates another 0.1% decline in the German economy this quarter after GDP had already contracted by 0.1% between April and June, according to the latest economic growth forecast released last week. That meets the technical definition of a recession.

A downturn in Europe’s largest economy could drag the entire eurozone down with it and would reverberate in the U.S.

German manufacturers, according to another survey, IHS Markit's Purchasing Managers Index, remained in contraction in August as the global trade war hit export demand. The 43.5 reading hovered close to the seven-year low reached in July. Moreover, sentiment about future output fell to a record low.

“The slump in Germany's manufacturing sector goes on and with no light at the end of the tunnel just yet,” Phil Smith, principle economist at IHS Markit, said.

The pinch is particularly apparent for these three non-automotive industrials: 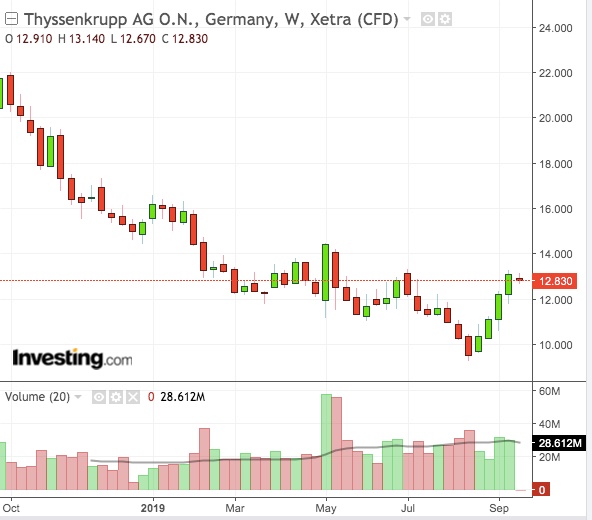 A global steel and metals conglomerate, Thyssenkrupp (OTC:TYEKF) (DE:TKAG) makes everything from elevators and auto parts to fertilizer and submarines. Its shares have sunk 31% over the past year, touching a 16-year low, compared with a 2.8% gain for Germany’s DAX benchmark stock index.

The company has put out four profit warnings during the same period and unveiled an aggressive overhaul of the business. Chief Executive Officer Guido Kerkhoff’s plan includes the loss of 6,000 jobs and the potential sale—either privately or via an IPO—of its most proftiable division, its elevators unit.

Thyssenkrupp’s debt has been downgraded further into junk territory via Moody’s Investors Service and S&P in August, which cited the global economic slowdown and sluggish demand from the auto industry. Adding insult to the already injurious situation, the company’s slumping shares are being kicked off the 30-component DAX this month, relegated instead to the MDAX midcap index.

With two key sectors—steel and autos—under pressure and higher raw material costs, Thyssenkrupp said last month it expects earnings before tax and interest (EBIT) for the fiscal year ending Sept. 30 to decline to about 800 million euros ($883 million), revised lower from a previous forecast of between 1.1 billion euros and 1.2 billion euros.The conglomerate is also weighing options for three other divisions—springs and stabilizers, system engineering and heavy plate—which account for 4% of group sales, which are currently responsible for a quarter of its negative cash flow.

“We will not allow a situation to continue where businesses with no clear prospects permanently burn money and destroy value that other areas have created.”

Another industrial giant under pressure because of Germany's economic slowdown is Siemens (OTC:SIEGY) (DE:SIEGn), which also posted disappointing earnings for its most recent quarter.

The engineering company’s adjusted earnings before interest, tax and amortization (EBITDA) from industrial business—its preferred profit measure—declined a more-than-expected 12% between April and June, its fiscal third quarter, to 1.94 billion euros ($2.14 billion). The company, most active in the energy, transportation and medical diagnosis sectors, blamed “significant headwinds in key markets,” such as automakers and machine building firms, for the drop. 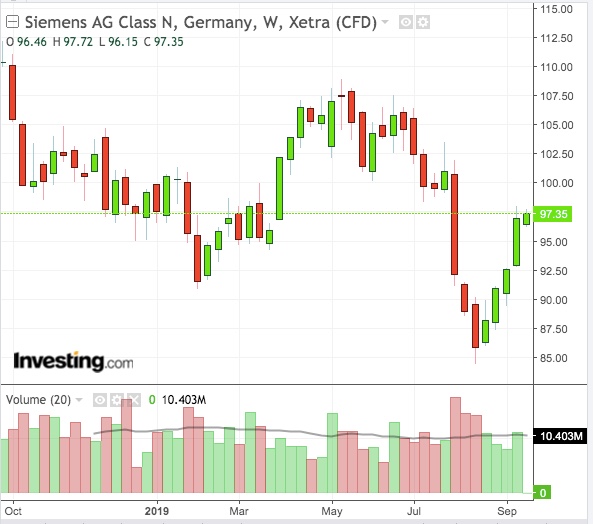 An 11% slide in its share price in the past year, including a dip close to a four-year low in August, reflects sensitivity to economic cycles and geopolitics. The biggest surprise, however, was that revenue and orders dropped in the digital industry division, which makes equipment and software for factory automation. Proceeds from this segment have helped offset weakness in the gas and power division in recent quarters, which has long been ailing.

While company-wide sales rose 4% and orders were up 8%, they fell 1% and 4%, respectively, in the digital business. These results are making reaching full-year financial targets more difficult.

“The favorable market environment for our short cycle businesses, which was a material basis for our outlook, has significantly deteriorated in the second half of the fiscal year,” the company said in its earnings statement last month. While confirming its financial goals for this fiscal year, Siemens added that “it becomes more challenging to achieve our expectation of moderate growth in revenue.”

The company also said that it sees its main industrial business margin in the lower half of its 11% to 12% target range, excluding severance charges. The measure shrank to 9.9% in the third quarter from 11.7% in the same quarter last year.

Rheinmetall (OTC:RNMBY) (DE:RHMG) also issued gloomy forward guidance last month. The company, which has one foot in the defense sector and another in auto parts, cut annual sales predictions for its automotive arm, forecasting a decline of between 2% and 3%, after previously expecting flat or slightly rising revenue.

It also expects lowered operating margins in its automotive business, to about 7%, from 8% anticipated earlier this year, when an industry-wide recovery during the second half was forseen. The company believes the auto sector contraction will hit group performance, but only to a limited extent with sales remaining within targets. The latest predication is 4% growth, at the lower end of the expected 4% to 6% range.

The defense industry, whose clients are mostly governments, is more shielded from adverse economic conditions than auto parts. Rheinmetall expects revenue from this segment to increase organically by 11%, excluding currency swings, bringing it to the upper boundary of its 9% to 11% target range. 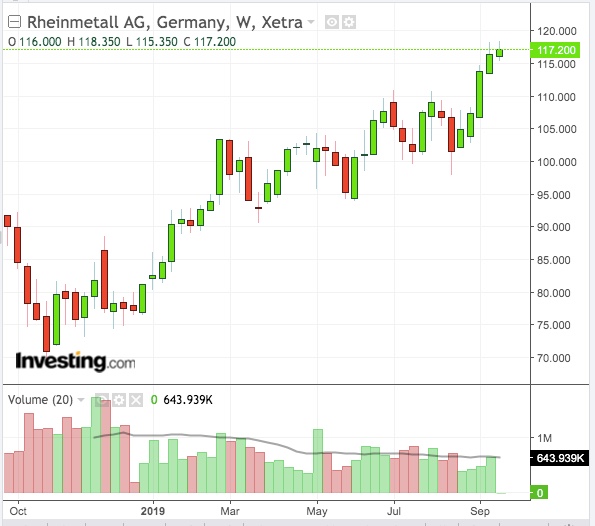 The 32% share price jump for Rheinmetall in the past 12 months reflects the ability of its dual-segment business model to keep the company profitable when economic conditions are tough.