By Steve Holland and Hyonhee Shin

WASHINGTON/SEOUL (Reuters) - U.S. President Donald Trump on Monday declined to comment on a newspaper report that North Korean leader Kim Jong Un had invited him to visit Pyongyang and said conditions were not ready yet for such a visit.

"The relationship is very good but I don't want to comment on that," Trump told reporters at the White House when asked whether Kim had invited him to North Korea.

A South Korean newspaper on Monday cited diplomatic sources as saying Kim had invited him to visit the North Korean capital in a letter sent in August amid stalled denuclearisation talks.

Trump said he would "probably not" be inclined to visit North Korea in the short term, but did not rule out an eventual visit.

"I would do it ... at some time in a later future, and depending on what happens I'm sure he'll love coming to the United States also. But, no, I don't think it's ready for that. I think we have a ways to go yet," Trump said.

Kim, in the letter sent in the third week of August, spoke of his "willingness" for a third summit and extended an invitation for Trump to visit Pyongyang, the JoongAng Ilbo newspaper reported, citing an unidentified source.

Trump on Aug. 9 said he had received a "very beautiful letter" from Kim.

But U.S. officials have not said anything about a second letter in August.

Trump and Kim have met three times since June last year to discuss ways to resolve a crisis over North Korea's missile and nuclear programmes, but substantive progress has been scant.

Their first two meetings were formal summits, the second of which, in Vietnam in February, broke down after they failed to narrow a gap between U.S. demands for North Korean denuclearisation and a North Korean demand for relief from sanctions.

They met for a third time on June 30 in the Demilitarized Zone between the two Koreas and agreed to restart working-level talks but that has not happened.

The North Korean mission to the United Nations did not immediately respond to requests for comment on the report.

An unidentified director-general for U.S. affairs at North Korea's foreign ministry said on Monday he hoped a "good meeting" with working-level U.S. officials would take place "in a few weeks".

But whether a meeting would lead to a "crisis or chance" was up to the United States, the official said, calling for a more flexible approach.

"The discussion of denuclearisation may be possible when threats and hurdles endangering our system security and obstructing our development are clearly removed beyond all doubt," the official said in a statement carried by North Korea's official KCNA news agency.

A spokeswoman for the State Department said the United States welcomed the North Korean commitment to resume negotiations in late September, but it had no meetings to announce.

"We are prepared to have those discussions at a time and place to be agreed," she said. The spokeswoman did not respond when asked if the United States was willing to offer any easing of sanctions or security guarantees.

South Korea's foreign minister, Kang Kyung-wha, asked about the newspaper report, said there were "detailed explanations about such a letter" but declined to elaborate.

Kang said it could be "too much to expect" that Trump and Kim would meet before any working-level talks.

"No agreement was reached between the two leaders in Hanoi even after working-level negotiations," Kang told a parliamentary panel. 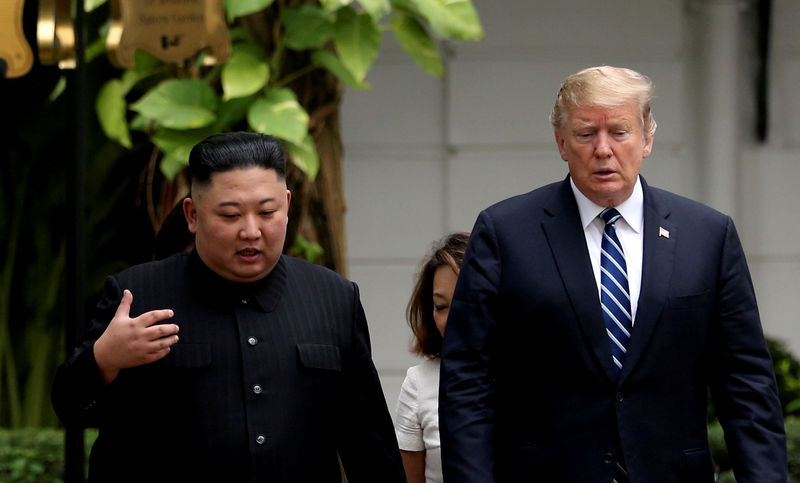 "For the sake of the success of another summit, their working-level teams should meet and have primary discussions on the outcome of the summit," Kang said.