FREJUS, France (Reuters) - French far-right opposition leader Marine Le Pen waded into controversy over the appointment of an EU Commissioner for "protecting the European way of life", endorsing a move that has stoked concern about rising populism across the continent.

Le Pen, leader of the former National Front, last year renamed the National Rally, hailed the appointment as an "ideological victory" during a speech on Sunday in which she also mapped out her path to another presidential run in 2022.

Incoming EU Commission President Ursula von der Leyen drew fire this week for assigning the "way of life" job description to the new commissioner responsible for migration - with critics deriding the title as a far-right slogan.

The appointment "speaks volumes", said Le Pen, who has often criticized the European Union while stopping short of any vow to usher France out, amid limited "Frexit" support among voters.

"It confirms our ideological victory," Le Pen said. Under pressure from national governments, she added, the European Union "has been forced to admit that immigration poses questions about the future of Europeans' way of life."

Jean-Marie Le Pen, Marine's father and predecessor as National Front chief, was placed under investigation on Friday in a long-running French probe into the alleged misuse of European Parliament funds to pay party staff from 2009-2017.

Since 2011, when Marine Le Pen assumed the leadership, the party has sought to broaden its appeal and trim its hard-right fringes, with mixed results.

In 2017, she failed to reach the second round of the presidential election - a feat her father had accomplished 15 years earlier, before losing the duel to Jacques Chirac. But her National Rally came top in France's May 26 European elections.

Lamenting the country's growing rural-urban divide on Sunday, Le Pen set out her pitch for France's March 2020 municipal elections and regional ballots the following year - including promises to nationalise infrastructure and adjust tax policy in favour of lower-income workers and regions. 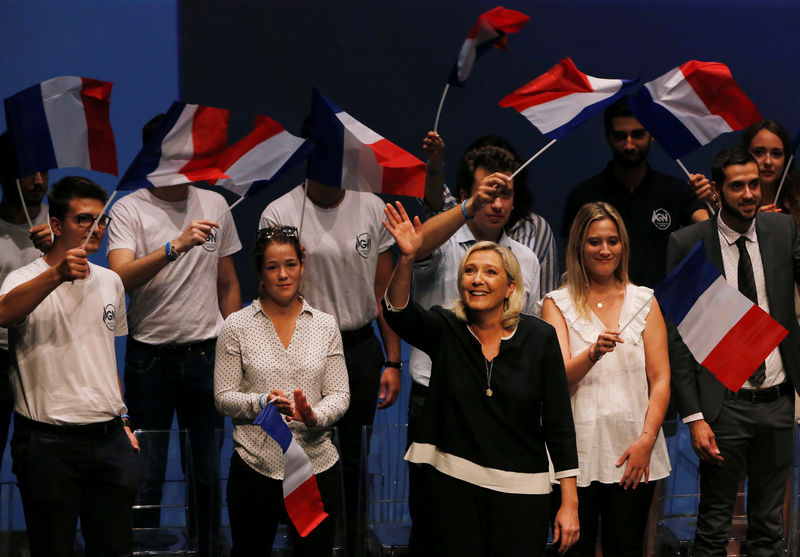 "Each election is an opportunity for our political family to attach another carabiner on the slope leading up to the summit," she said. "And the summit is the Elysee."