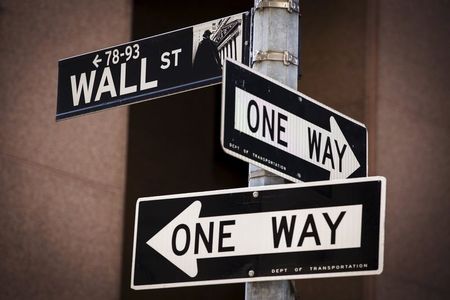 Investing.com -- U.S. stock markets surged to new record highs at the opening of trade on Tuesday, as optimism over the early roll-outs of vaccines to treat the Covid-19 coronavirus sustained a broad rally in everything from Brazilian iron ore miners to online pet food stocks.

Helping the gains were reports that a bipartisan group of Senators had drafted a compromise plan to provide some $908 billion in fresh support for the economy, a figure that included $240 billion for state and local governments. That had been a key sticking point in negotiations between Congressional Republicans and Democrats before the election earlier this month. Newswire headlines suggested that Treasury Secretary Steven Mnuchin and House Speaker Nancy Pelosi would speak later at 1 PM ET.

Before that, the session seemed likely to be dominated by testimony in Congress from Mnuchin and Federal Reserve Chairman Jerome Powell, the first time they have appeared together since Mnuchin refused to extend government authority for a handful of lending programs that the Fed had set up at the start of the crisis.

Among the big initial gainers was Tesla (NASDAQ:TSLA) stock, which rose 3.6% to a new record high after S&P Dow Jones Global Indexes said that the stock would be incorporated into the S&P 500 in one go, rather than over two discrete dates.  Elsewhere, there were more big gains for vaccine makers after Moderna filed in the EU for emergency use authorization of its Covid-19 drug. Moderna (NASDAQ:MRNA) stock rose another 11%, while Pfizer (NYSE:PFE) stock rose 4.2%, a day after it and partner BioNTech (NASDAQ:BNTX) asked the Food and Drug Administration to approve their vaccine.

Apple (NASDAQ:AAPL) stock rose 2.8%, helped by reports that rival Samsung (KS:005930) will discontinue its Galaxy Note smartphone in the new year. That removes some competition for the iPhone maker at the high end of the market.

On the downside, Zoom Video Communications (NASDAQ:ZM) stock, a favorite stay-at-home play for most of this year, tumbled 11.8% after its latest quarterly report - although strong - failed to live up to the rarified expectations of its shareholders.

However, the day got off to a bright start as research firm IHS Markit said its purchasing managers index for U.S. manufacturing rose in November despite the slowdown in broader economic activity due to the latest wave of the pandemic. The PMI rose to 56.7 from 53.6 in October.

The more closely watched ISM manufacturing index fell, however, to 57.5 from a 20-month high of 59.3.