LONDON (Reuters) - Britain's Vodafone (L:VOD) will separate its mobile masts in Europe into a new company worth upwards of 18 billion euros (£16.13 billion) with a view to listing a minority stake.

Announcing the plan on Friday, Vodafone said the move would unlock value for shareholders and reduce its debt.

Shares in the world's second largest mobile operator rose as much as 10% on the news to 145 pence, putting them on track for their best daily rise since 2002 and regaining all of the ground lost when the group cut its dividend for the first time ever in May.

Chief Executive Nick Read said a standalone towers business would unlock "the significant value of our infrastructure assets at a time when tower multiples are very attractive".

The separate unit would comprise 61,700 sites in 10 markets, 75% of which will be in Germany, Italy, Spain and Britain, and could have annual proportionate revenue of 1.6 billion euros and core earnings of 900 million euros a year.

It would overtake Cellnex (MC:CLNX), currently Europe's biggest towers group, which is valued at just over 17 times earnings.

Read told analysts there was high demand to invest in Vodafone's infrastructure and discussions with investors indicated the assets could achieve values north of 20 times earnings, which would imply a value of more than 18 billion euros.

Mobile operators across Europe have been selling or sharing their network infrastructure to cut debt, tapping into the appeal of the assets' steady cash flows to investors.

Read said the proceeds from listing a minority stake, or from attracting other investors, would be used to cut Vodafone's debt, which stood at 27 billion euros on March 31.

Vodafone already shares network infrastructure with Telefonica's O2 (MC:TEF) in Britain and with Orange (PA:ORAN) in Spain and on Friday it finalised an agreement in Italy with Telecom Italia's (MI:TLIT) tower unit INWIT (MI:INWT).

Its stakes in these joint ventures will be rolled into the new European company, which will be operational by May 2020.

Teaming up with other operators enabled next-generation mobile services to be rolled out faster and at lower cost.

"This is a window of opportunity where 5G is launching into the market," Read told reporters.

Cellnex said on Friday it was not planning to invest in listed tower companies.

Friday's Italian deal left Germany as Vodafone's only major market without a network-sharing agreement, a situation Read said could be addressed after the EU cleared its acquisition of Liberty Global's cable networks in the country last week.

Vodafone would talk to players in the market, he said, adding that Deutsche Telekom (DE:DTEGn), like Telecom Italia , shared its vision to build a high-quality network.

Deutsche Telekom and Telefonica Deutschland (DE:O2Dn) said last October they would expand their network cooperation ahead of 5G, with Telekom connecting up to 5,000 of Telefonica's base stations to its fibre-optic network.

Deutsche Telekom has also carved out its own towers unit, Deutsche Funkturm, which runs a portfolio of 29,000 mobile masts. A spin-off of the towers unit has long been mooted, but has yet to materialize.

Vodafone also reported on Friday that first-quarter group service revenue decline by a smaller-than-expected 0.2%. It said a gradual recovery in its previously weak top line would continue.

"We are now at a turning point in our service revenue following the low point in Q4 of last fiscal year," Read told reporters. "We are confident that this improvement in service revenue will continue as the year progresses."

Analysts at Citi, who have a "buy" rating on Vodafone, said the better top line and the decision to separate the towers and look at monetisation should be well viewed.

Vodafone said market conditions in Italy had continued to improve and retail growth in Germany remained robust, which in part had been offsetting intense competition in Spain.

The company had launched more new pricing plans and products in the quarter than in any he could remember, including next-generation 5G services in its major markets. 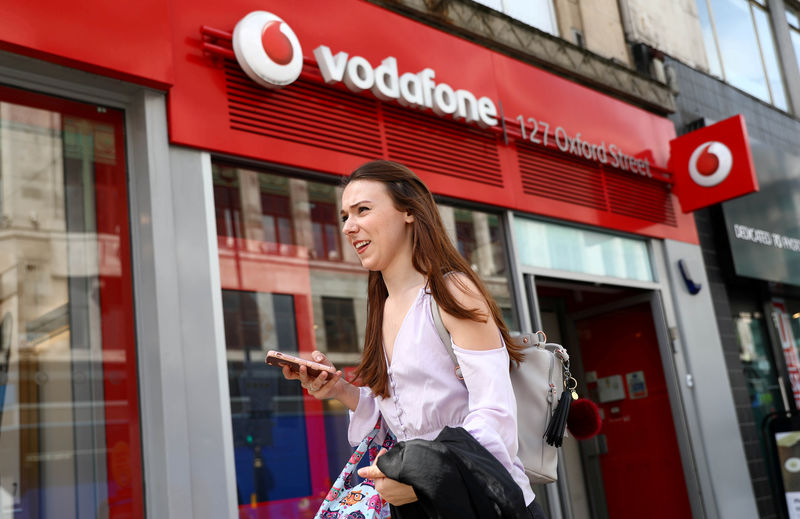 He said Vodafone was confident about its full-year guidance for adjusted core earnings of 13.8 billion euros-14.2 billion euros and free cash flow before spectrum costs of at least 5.4 billion euros, Read said.