U.S. nonfarm payrolls under pressure to beat consensus in January

U.S. nonfarm payrolls under pressure to beat consensus in January 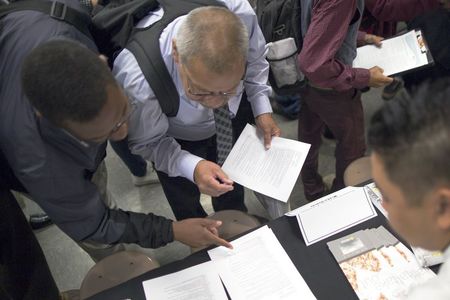 Investing.com – Investors looked ahead Friday to publication of January’s employment report, with expectations leaning towards a healthy beat as recent indicators continued to show a solid labor market.

The U.S. Labor Department will release its January nonfarm payrolls (NFPs) report at 8:30AM ET (13:30GMT) on Friday.

The consensus forecast is that the data will show jobs growth of 175,000, following an increase of 156,000 in December, the unemployment rate is forecast to hold steady at 4.7%, while average hourly earnings are expected to rise 0.3% after gaining 0.4% a month earlier.

An upbeat employment report will point to an improving economy and support the case for higher interest rates in the coming months, while a weak report would add to uncertainty over the economic outlook and push prospects of tighter monetary policy further off the table.

Given the recent wave of positive labor market data, NFPs may be under pressure to beat those consensus estimates.

The employment report from private payroll processor ADP showed on Wednesday a spectacular gain of 246,000 jobs last month, smashing expectations for the creation of just 165,000. That was also the largest increase since June of last year.

At the same time, manufacturers increased their headcounts by 46,000, the most in two years.

Similarly, the employment index of the manufacturing ISM survey out Wednesday also picked up sharply in January as activity in the sector hit its highest level since November 2014.

On Thursday, weekly jobless claims fell further than expected to 246,000 in what was its 100th consecutive week below the 300,000 level that is considered to indicate a firming labor market.

“With jobs growth strong, wages now rising, and inflation closing in on the Fed's longer-run objective (echoed again in the strong prices paid figure of the Manufacturing ISM survey), we are struggling to see why the market is not giving more credence to the possibility of a March rate hike,” said experts at ING.

Markets currently price in the probability of an increase in March at just 17.7%, according to Investing.com's Fed Rate Monitor Tool.

According to Fed fund futures the odds are at around 65% for the first tightening to come in June with a second and final increase expected for December.