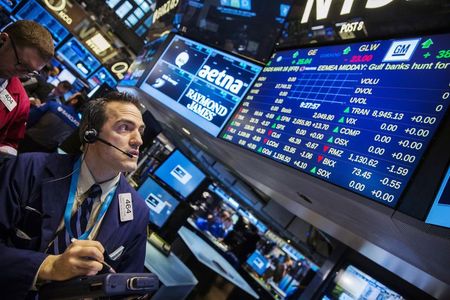 Investing.com – Stocks climbed for a second day in a row Thursday as hopes built for some sort of trade deal between with the United States and China.

The trade optimism was set off, in part, by President Donald Trump who tweeted that Chinese Vice Premier Liu He, chief of the Chinese negotiating team, would visit the White House on Friday.

Overnight, fears the Chinese delegation would leave Washington Thursday, after just a day of talks, had sent futures markets plunging. Markets have tended in recent months to move violently on any trade news. Thursday's move looked like computer algorithms reacting to the Trump tweet.

If there was a downside to the rally, it was the lack of news during the trading day. The negotiators met (they reportedly called in for takeout at lunch from Clyde's in Washington) but there was no real news.

The rally was broad and 10 of 11 S&P 500 sectors were higher, led by financial stocks, including American International Group Inc (NYSE:AIG), Bank of America (NYSE:BAC) and JPMorgan Chase (NYSE:JPM). Energy shares also moved up.

Only utilities were lower because interest rates moved higher. The 10-Year Treasury yield finished at 1.661%, up from Wednesday's 1.587%. (The yield hit a low of 1.429% on Sept. 3 as investors started to worry a recession might be coming.)