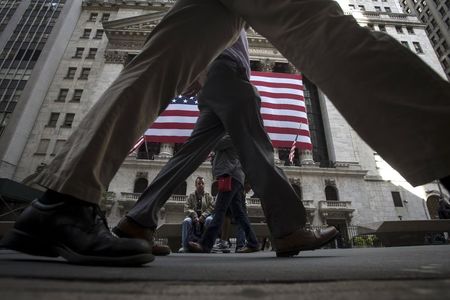 By 9:35 AM ET (1335 GMT), the Dow Jones Industrial Average was down 12 points or less than 0.1% at 27,650 points. The S&P 500, which had set its first new record high since February earlier in the week and the Nasdaq Composite, which posted the latest of its 35 new record high closes this week, were both down by similar amounts.

Such data as were published Friday were mildly supportive, with IHS Markit's PMIs for the manufacturing and services sectors both coming in ahead of expectations for August. Existing home sales data for August are due at 10 AM ET.

There was little to get excited about on a slow summer news day - with a few exceptions. Solid earnings from agricultural machinery maker Deere (NYSE:DE) & Co., often seen as a proxy for the health of the farming sector, sent the stock up 4.7% to a new all-time high. Tesla (NASDAQ:TSLA) stock, meanwhile, cracked the $2,000 level for the first time ever ahead of its stock split. As with Apple (NASDAQ:AAPL)'s $2 trillion valuation posted earlier in the week, the number is of little significance beyond the fact that it's a nice round number.

Amazon (NASDAQ:AMZN) stock fell 0.5% after news that its consumer head Jeff Wilke is to retire.

The biggest immediate threat to stocks - from rising bond yields - has petered out in the second half of the week, with the yield on the 10-Year Treasury note falling to 0.64% from a high of 0.72% a week ago. However, the negative tone from other markets - Crude Oil Futures lost over 2% in early trading on worries about global demand - kept a cap on risk appetite.

The miserly yields on offer from bonds are one factor likely to support the stock market even if there is a new setback to the economy, argued Robeco portfolio manager Jeroen Blokland in a weekly blog post.

"Valuation is a relative concept," Blokland said. "Government bonds, for example, are currently a lot more expensive" than equities.

He noted, however, that there is "no shortage of catalysts" on the horizon that could change market sentiment.

"The low-hanging fruit in the recovery has been harvested, labor markets remain weak and the run-up to U.S. elections may also lead to greater volatility on equity markets," Blokland argued. "That's why we prefer to huddle fairly close to the exit; to ensure that when sentiment turns, and valuation is used as a stick to beat the dog, we are not trampled underfoot by other investors who are also all charging for the door at the same time."