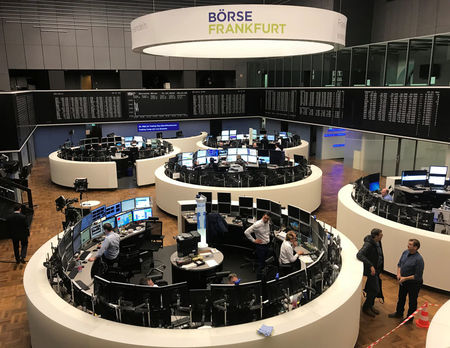 Investing.com - European stock markets slumped Monday, as investors returned from Friday’s May Day holiday to fresh tensions between the United States and China over the coronavirus crisis.

U.S. Secretary of State Mike Pompeo said on Sunday there was "a significant amount of evidence" that the new coronavirus emerged from a Chinese laboratory, without making available any details. This followed Friday’s warning from President Donald Trump of retaliatory measures, including new trade tariffs, against China over the pandemic.

Worries that this spat may turn into another trade war, just a few months after the first round of the trade deal between the two powers was signed ending the last damaging conflict, are hitting risk appetite.

More bad news came from the latest estimate of Spanish factory activity, with the country’s manufacturing PMI falling to 30.8 in April from 45.7 in March, the biggest drop in one month since the records started in February 1998.

In corporate news, Thyssenkrupp (DE:TKAG) stock slumped 15% amid concerns over the deal to sell its elevators unit following a Financial Times report that Cinven and Advent are seeking other investors for the 17.2 billion euro deal, which was the biggest European buyout deal in a decade.

Oil futures weakened amid fears of a trade war and despite the major producers beginning output cuts to offset a slump in fuel demand triggered by the coronavirus pandemic. At 3:55 AM ET, U.S. crude June futures traded 5.8% lower at $18.63 a barrel. The international benchmark Brent contract fell 1.7% to $25.98.