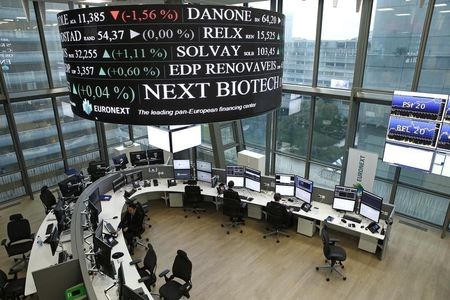 Stock markets in Asia breathed a sigh of relief after U.S. President Donald Trump confirmed that the U.S.-China trade deal was "fully intact", contradicting the impression his trade adviser Peter Navarro had made when he said the trade deal with China was "over".

Navarro’s comments had revived memories of the trade war between the two countries, which roiled financial markets and dented global growth before being partially settled with the first phase of an agreement in January.

Stocks in Europe have rallied hard since hitting a low in March, when economies were shut down to fight the coronavirus. The gains have been driven by hefty central bank stimulus around the globe and gradual easing of restrictions, although worries about a second wave have kept investors jittery.

Economic indicators will center around the closely-watched June PMI data for the European region Tuesday. The PMI data for May, while better than April, showed that the manufacturing and service sectors were still deep in contraction territory. Some improvement is expected as the region’s services sectors catch up a little with manufacturing in the reopening process.

In corporate news, Intu Properties (LON:INTUP) is likely to be in focus after the owner of shopping malls in the U.K. and Spain had appointed KPMG to contingency plan for administration in the event it doesn’t receive needed financial backing.

Oil prices edged lower Tuesday, amid worries that an escalation of U.S.-China tension threatens a delay in the global economic recovery. China is one of the world’s biggest oil importers, and a trade war with the U.S. would likely stunt its economic growth.

Later Tuesday, the American Petroleum Institute will release its own data on crude oil and product inventories. Those numbers come in advance of government figures that are usually released on Wednesday.