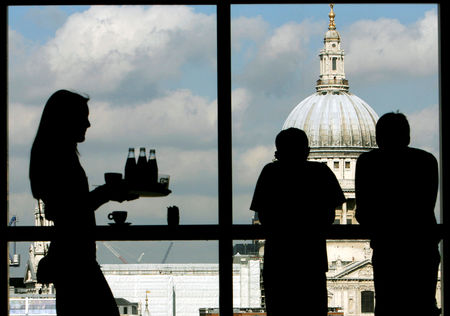 Investing.com -- U.K. stocks are reaping the benefits of the government's vaccination policy, after Prime Minister Boris Johnson became the first leader in Europe to map out a clear timetable for a return to normality after a second winter of lockdowns.

The U.K.-focused FTSE 250 index was the best performing index in Europe by a distance on Tuesday, rising nearly 1% by mid-morning in London thanks to strong gains in all manner of stocks poised to gain from the reopening of shops and the return of commuters to their offices. The FTSE 100, meanwhile, was the best performing of the larger boards, as sustained strength in mining and commodity stocks limited its losses to 0.2%.

By contrast, most European markets were markedly lower, as increasing talk about the return of inflation prompted investors to take money off the table, especially in those stocks which have been major winners in the pandemic. The German Tech Dax was down 2.9% while the OMX Copenhagen 20 also fell over 2%, as money poured out of the likes of Vestas Wind Systems (OTC:VWDRY) and jeweler Pandora (OTC:PANDY).

The chief trigger for the move was a TV address by Johnson late on Monday which promised a "cautious and irreversible" way out of lockdown in four stages, which aims to lift all meaningful restrictions on social and business life by early July.

"The end really is in sight," Johnson said.

The global audience might wonder that the words of a man who has already told countless, demonstrable falsehoods - mainly but not exclusively about Brexit - can still persuade people to commit real money to markets (unless as a contrary indicator). However, this time, Johnson has the facts on his side: deaths from Covid-19 are averaging less than 500 a day for the first time this year, while the number of new infections is down by some 80% from its peak in January. Nearly 18 million people have already received their first vaccination - over one-third of the adult population - and fresh data released over the weekend offered tangible proof that the decision to lengthen the time between the two required injections had slowed transmission of the disease as well as easing pressure on a stretched hospital system. After a year of at times spectacular mismanagement, London appears to have found a recipe for success.

Reopening is even more important for the U.K. economy than for many others, given the intensity of services in its GDP. The blow to services is one reason that U.K. GDP fell more sharply than, say, Germany's last year. As the European economy reverts to the mean, the figures will flatter Britain. In particular, they will flatter pub chains like J D Wetherspoon  (LON:JDW) or Mitchells & Butlers (LON:MAB), commercial landlords like Hammerson (LON:HMSO) or British Land (LON:BLND), or the companies whose food and news agent outlets dominate the country's rail and bus stations, such as SSP Group (OTC:SSPPF) and WH Smith (LON:SMWH). It was these midcaps that led the charge on Tuesday, along with other High Street names like fast-food joint Greggs (LON:GRG) and transport-themed stocks such as Trainline and hotel owner Whitbread (LON:WTB).

Such stocks are more certain gainers in the near term than those that depend on the revival of international travel and tourism. EasyJet (LON:EZJ), conspicuously rose 10% after saying that bookings had risen 300% in the wake of Johnson's speech, but that comes off a pitifully low base, and international tourism demands the cooperation of other countries, chiefly in Europe, whose reopening schedules are well behind the U.K.'s - so far, in fact, as to cast real doubt over how open they will be by summertime.

Even so, EasyJet's offhand statement lifted the whole travel and tourism sector, with big gains in everything from Jet2 (LON:JET2) to Rolls Royce (LON:RR), whose outlook for maintenance revenues improves with every extra hour that airlines use its engines.

It remains a mean reversion story. both on a small scale and a large one: on the macro level, U.K. equities remain the biggest underweight in Bank of America's weekly surveys of international fund managers, due to Brexit and cyclical issues.  At a company specific level, the biggest gains are likely to be in stocks that were until now the most distressed, such as movie theater owner Cineworld.  But for those who don't need the excitement of high beta, the country's banks and asset managers probably remain the safer bet.