StockBeat: Diversity Is Strength for Unilever

StockBeat: Diversity Is Strength for Unilever 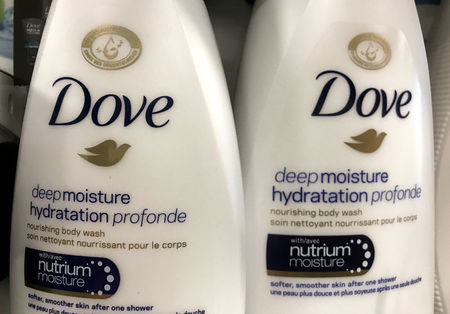 Investing.com -- Sellers of consumer staples are supposed to be resilient, and so it has proved with Unilever PLC (LON:ULVR).

Underlying sales fell 0.3% in the three months through June, Unilever said on Thursday, their first quarterly decline in 15 years but far less than the 4.3% drop that analysts had forecast.

Given the high proportion of Unilever’s sales in emerging markets, where currency depreciation also hurt in the quarter, the figures are almost startling: underlying operating profit, adjusted for currency factors, rose 3.8%, and margins improved by 50 basis points.

Unilever shares reacted with one of their biggest one-day jumps in years, rising 7.7% by mid-morning in London, accounting for a decent chunk of the 0.6% gain in the FTSE 100. The benchmark Stoxx 600 rose 0.4%, after healthy updates from other corners such as auto giant Daimler (DE:DAIGn) and chipmaker STMicroelectronics (MI:STM).

Unilever’s diversity has proved to be its strength in the last three months, helping it – largely – to absorb alarmingly large and quick shifts in demand for specific products.

Covid has made the global consumer more hygiene-conscious, driving a gain in sales of its Cif surface cleaners of nearly 20%, while sales of its Domestic bleach chalked up a gain of over 10% (even without any spike in oral or intravenous use by those following the medical advice of the U.S. President).

But what the coronavirus gave Unilever with one hand, it took away with the other: sales of beauty and grooming products slumped as locked-down workers - let’s be honest - just stopped trying.

Even within single product lines, there were sharp fluctuations to deal with: sales of ice cream for home consumption rose 26%, but the division that distributes to cafes, restaurants and ice cream vans suffered a 30% drop.

Expect the unevenness to continue, not least because of the geographical sales mix: China, where sales fell by a mid-teen percentage before rebounding, is clearly on an upward path after largely containing the virus. The same can’t be said for either India or the U.S., two other key markets.  Chief financial officer Graham (NYSE:GHM) Pitkethly unsurprisingly played down the prospects of a quick recovery on a call with analysts, according to newswire reports.

The stock is unlikely to ever grab the attention of the Robinhood bros, but at only 22 times trailing earnings, it is still affordable. Likewise, the dividend yield of some 3.30% at Wednesday’s closing price is more than decent and appears sustainable, helped by the judicious release of capital through transactions such as the partial spin-off of the tea business.

Unilever lagged its arch-rival Nestle (SIX:NESN) in improving shareholder returns and still has a performance gap to make up: over the last two years, Nestle shares have risen some 43% while Unilever’s have risen less than 11%. Thursday’s results, however, are pretty clear evidence that it is moving in the right direction, and at some speed.