StockBeat: Danone Shake up Aims to Steer Away From Troubled Waters

StockBeat: Danone Shake up Aims to Steer Away From Troubled Waters 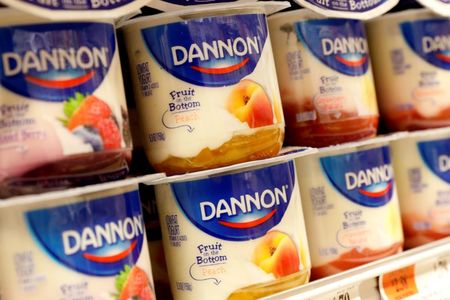 Investing.com -- Dairy giant Danone SA (PA:DANO) is planning its biggest shake-up in recent times as it tries to turn around a losing battle for market share in the U.S. and China, its most important non-European markets.

The French group said on Monday it’s restructuring itself along geographical lines, creating new regional CEOs for North America (Shane Grant) and for the rest of the world (Veronique Penchienati-Bosetta) and parting with its long-time chief financial officer, Cecile Cabanis.

It will also step up its disposal of underperforming brands as it tries to find a way back to a medium-term target of 3%-5% annual sales growth – a target that will be missed this year. The inclusion of Vega is among those to be put up for sale, a disappointing end to what should have been a profitable venture into plant-based dairy substitutes.

The pandemic has been hard on Danone, a company that has bet aggressively on rising dairy and water consumption in emerging markets in the past. The crisis has borne out many cynics’ belief that it depended too much on overpriced bottled water brands Evian and Volvic to sauce profits and mask underlying profitability problems in the dairy business. The closure of restaurants and bars across the world this year, along with the suspension of many other kinds of corporate hospitality, has led to a collapse in water sales, which are down 17% over the first nine months of the year.

To make things worse, China’s restrictions on imports of dairy produce and infant formula have ravaged the company’s other big money-spinner. The euro’s appreciation hasn’t helped either. It accounted for 7.1 percentage points of a 9.8% drop in third-quarter sales.

The market took the news of restructuring with what can best be termed cautious optimism: a rise of 1.4% is not much compared to the largely uninterrupted slide of over 40% since Donald Trump stepped up his trade war against China 14 months ago.  The new guidance of a 14% recurring operating margin, while an improvement from the first half of this year, is still nearly a full point below where it was less than two years ago. While it talked of delivering 1.8 billion a year in free cash flow, it said nothing about returns to shareholders.

The reset may be welcome, but some investors will feel it could have set the bar a little higher for its new management team.

That it chose not to is due overwhelmingly to the effects of the virus. The guidance for the rest of this year was full of caution: “Looking into the remainder of the year, business remains difficult to predict as the environment is still volatile and much uncertainty remains about the implications of the pandemic as to how exactly lockdown easing, channel dynamics and consumer habits may evolve.”

It flagged the ongoing margin pressure generated by the shift to home consumption and the continued unpredictability of exporting into China.