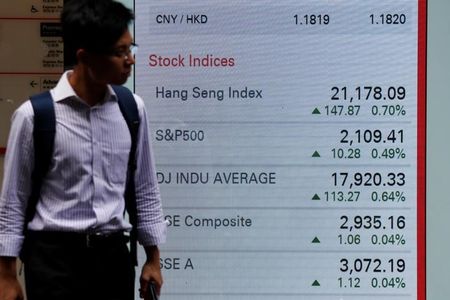 By Alun John and Tom Westbrook

SINGAPORE (Reuters) - Asian stock markets advanced to a more than two-week high on Tuesday after U.S. President Donald Trump was discharged from hospital following treatment for COVID-19, and as prospects for a fresh U.S. stimulus package appeared to brighten.

Wall Street had earlier rallied on Trump's improving health, and futures indicated that European stocks were set to follow suit.

Trump returned to the White House on Monday after a three-night hospital stay and said he felt "real good", though one of his doctors cautioned that he may not be out of the woods yet.

U.S. House Speaker Nancy Pelosi and Treasury Secretary Steven Mnuchin spoke by phone for about an hour and were preparing to talk again Tuesday, continuing their work towards a deal on coronavirus relief spending.

As well as Trump's health, "there is also some market attention on whether the U.S. Congress will pass the extra stimulus bill," said Tai Hui, Chief Asia Market Strategist, J.P. Morgan Asset Management

"If we do see some form of stimulus coming through, I think the market will take it in a positive light as much of the important support from the previous round has expired," he said.

The optimism hit gold and other safe haven assets.

Bond markets also joined in, as a sharp selloff in U.S. bonds on Monday carried over into Asia on Tuesday.

However, analysts said selling in other Asian markets was more subdued than in the U.S. market because regional investors are beginning to price in a victory for Democratic presidential candidate Joe Biden in the Nov. 3 election.

"The selloff in U.S. yields is more driven by Trump getting out of hospital," said DBS rates strategist Duncan Tan in Singapore.

"That narrows some of the uncertainties around the election process. In the short term, at the very least, it removes the tail risk of having to consider if Trump or Biden is unable to participate in the election."

In currency markets, the dollar was under pressure on other majors apart from the yen, as higher yields can often draw flows from Japan.

The typically risk friendly Australian dollar gained briefly after the Reserve Bank of Australia left rates on hold, as expected, but later fell back, and the potential for further monetary easing capped gains.

Oil jumped more than 5% overnight and edged higher still in Asia, supported by the Trump news and a supply squeeze as a strike shut six Norwegian offshore oil and gas fields. 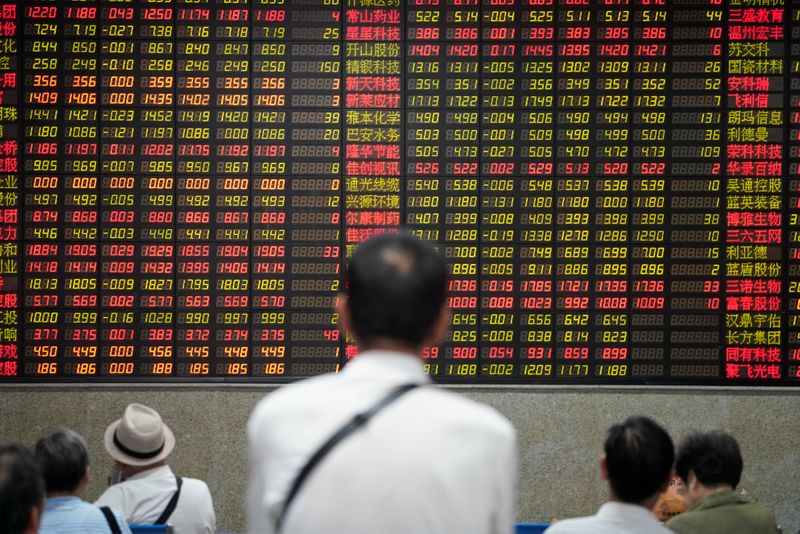