JOHANNESBURG (Reuters) - Land prices are "broadly stable" despite uncertainty as the ruling ANC moves to change the constitution to expropriate land without compensation, the Banking Association of South Africa said on Thursday.

Investors have been unnerved by one of the signature policy drives of President Cyril Ramaphosa ahead of 2019 elections, which will be a tough test for his African National Congress (ANC) party against the backdrop of a recession and signs of rising social discontent. [nL8N1WX4CM]

Over two decades after the end of apartheid, most private land in South Africa remains in the hands of the white minority, making it a potent symbol of wider economic disparities.

The Banking Association said in a statement that land prices have "broadly remained stable" with exceptions such as drought-hit areas and life-style and game farms, which it said have seen "some sharp declines."

"However, prolonged uncertainty will significantly reduce property values," it said, while also noting a decrease in farm economic activity.

"There has been a slowdown in the number of farm transactions and a decrease in capital investment into agricultural properties since the proposal to amend the constitution to explicitly allow for expropriation with compensation," it said, without giving details.

Still, lending by commercial banks to the sector remains robust, rising 10.3 percent in 2017 and 11.7 percent in the first six months of this year.

The association said unaudited figures for the 'Big Four banks' - Absa (J:ABGJ), Nedbank ,NEDJ.J>, Standard Bank (J:SBKJ) and FirstRand (J:FSRJ) - showed their exposure to the farm sector at the end of June was 148 billion rand ($10.30 billion).

"The collateral held by banks, supported by land values, is still deemed to be reasonable, and the lending criteria of commercial banks has not been impacted at all at this stage. For now, we are confident the loans can be serviced," it said.

South Africa is the continent's biggest maize producer and the world's second largest exporter of citrus fruits. The sector also includes livestock, sugar and high-end fruit such as avocados. 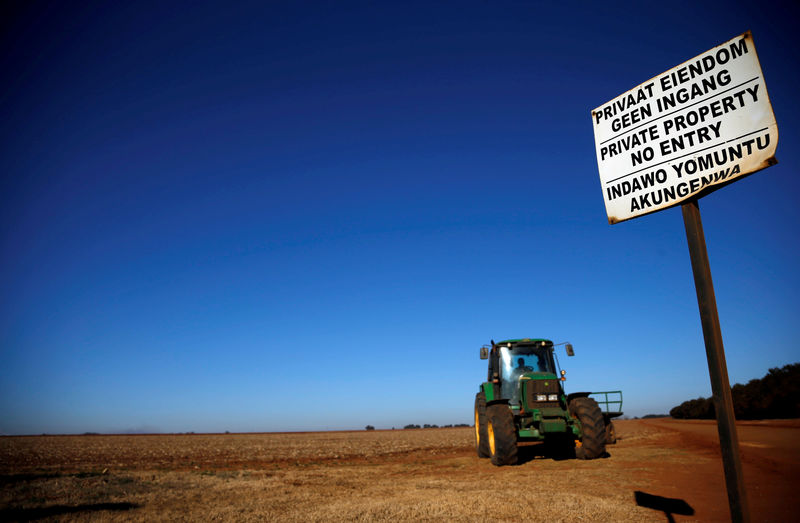