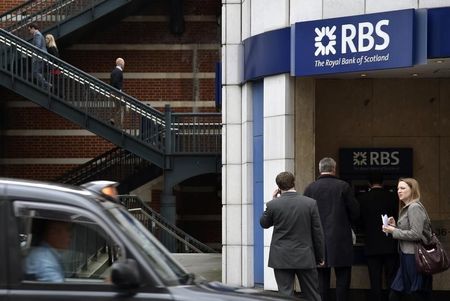 LONDON (Reuters) - Royal Bank of Scotland (LON:RBS.L) will close its corporate banking operations in India as part of a plan to sell or shut businesses in two-thirds of the countries it operates in, a person familiar with the situation said.

RBS, which was briefly the world's largest bank by assets, has spent the eight years since a 45 billion pound government bailout cutting costs and reorganising.

It is closing the Indian business after failing to find a buyer, the person told Reuters on Monday.

Earlier this year, Reuters reported Singapore's biggest lender DBS Group Holdings (SI:DBSM) and South African banking group FirstRand (J:FSRJ) were in separate talks to buy the unit. "After examining a number of potential sale options for our banking business in India, we have concluded that it is not feasible to sell the business in its entirety," the bank said in a statement. "We will now look at other options which may include a wind down or sale of individual parts."The decision to close the India business is part of Chief Executive Ross McEwan's strategy announced last year to operate in 13 countries, down from 38.

McEwan has cut thousands of jobs and assets to reduce expenses, in a bid to boost earnings after eight straight years of losses.