FRANKFURT/DUESSELDORF (Reuters) - Wilfried Haas owns a 3 kilowatt solar system which has been running as a micro power station since 1992, helping Germany, Europe's largest economy, curb its dependence on coal and nuclear power. All that might be about to change.

Together with thousands of other pioneer investors, Haas is considering whether he can continue his micro-generation without the subsidy scheme that helped to give Germany the highest level of installed renewable capacity in Europe.

After the scheme begins to wind down at the start of next year, Germany in the worst case scenario would lose wind and solar energy equivalent to four nuclear power plants in 2021 alone, industry figures show. For now, it is unclear how any gap will be filled.

Lobby groups on all sides are bickering as Berlin thrashes out an updated version of its renewable energy law. The government will discuss the latest draft on Wednesday.

The legislation is needed because when policymakers limited German subsidies to 20 years in 2000, the country had yet to decide on its Energiewende - or shift from coal and nuclear power to renewable energy.

Haas, 62, began his career in renewable generation before the government's big policy change. The Chernobyl nuclear disaster in 1986 prompted him to leave his job in industry and he set up a renewable project company GEDEA-Ingelheim in Ingelheim, west of Frankfurt.

Once they became law, Haas benefited from the subsidies, known as feed-in tariffs, for selling renewable energy to the grid at about 50 cents per kilowatt hour.

Without them, he faces earning no more than the wholesale power price of around of 2-4 cents.

Protecting the environment was central, Haas said, and he hoped to continue operating his micro generation but it may cease to be economic if at any stage he faces a major repair bill.

"In that case the financial burden would become too great, meaning that in the current regulatory framework continuing to operate it likely won't pay off," he said.

Like other asset owners, he would have to decide whether to sell, upgrade or dismantle his generation capacity should Berlin fail to create a regulatory environment that makes it economic.

"We need to be careful not to lose what we have achieved," said Wolfgang Lemb, board member in charge of wind and solar at IG Metall, Germany's biggest and most powerful trade union.

"There must be more flexible regimes for repowering and ideas for how to continue operate old plants economically."

The big utilities have long complained the playing field is uneven, with fossil fuel generators arguing they should receive subsidies for providing reliable baseload, if renewable energy gets help.

Another issue is that large utilities are unlikely to wish to buy any small-scale generation that might come up for sale from asset-owners who no longer wish to operate it.

Utility companies are, however, interested in marketing roof-generated solar power on behalf of retail energy producers or in upgrading old wind farms.

Norway's Statkraft [STATKF.UL], for example, is seeking to arrange long-term contracts, referred to as power purchase agreements (PPA), between producers and energy users.

"We do see a lot of potential for PPAs here, both for wind power plants that will see subsidies expire after 2020 and for new solar projects," Sascha Schroeder, a vice president at Statkraft, said.

E.ON (DE:EONGn), Germany's largest energy company, said it would help owners of older plants install smart meters - which display supply and consumption - so they can more effectively use the power they generate.

"At the same time, E.ON will take off excess electricity as a direct marketer and the customer benefits from an annual credit or insurance for their PV-systems (photovoltaic)," a spokesman said.

A decline in the cost of storage batteries could also help. 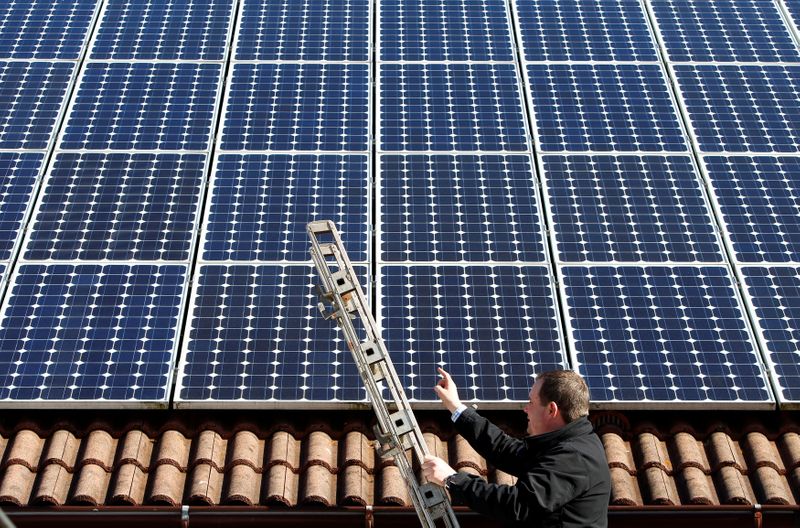 "We have to see how that could be attractive for clients in Germany, because of course the market price is significantly below the feed-in tariff," she said. "However, it is technically possible."