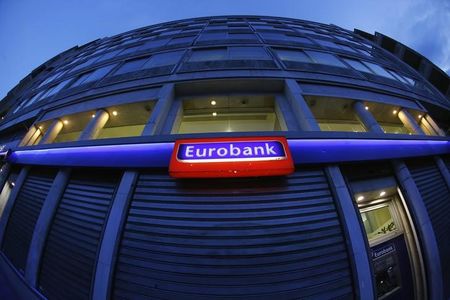 NICOSIA (Reuters) - Eurobank (AT:EURBr) will maintain its Balkan footprint in Bulgaria, Serbia and Cyprus after pulling out of Romania, its deputy CEO said on Tuesday, expecting the group's subsidiaries there to double their profitability over the next few years.

That sale closed a decade-long chapter of ambitions by Eurobank and other Greek lenders to spread their wings abroad after the country's debt crisis forced them to retreat and sell foreign subsidiaries to boost their capital ratios.

Executives said these countries have emerged from the financial crisis and their economies are now expanding by 3 to 4 percent annually, meaning there is room to grow lending to businesses and households.

After deleveraging its non-Greek assets to 8.7 billion euros from about 11.2 billion, meeting commitments agreed with EU competition authorities, Eurobank is set to emerge as the lender with the largest international presence among its Greek peers.

The group was fast to pull out of Poland and Turkey at the onset of the global credit crisis in 2008 and sold its Ukraine operations in 2016.

"Our strategy was to exit countries that were too large for us to become one of the five biggest banks there. To achieve this would take a lot of investment," Ioannou said. "Romania required more investment for us to become a sizeable player."

But in Bulgaria, where Eurobank bought the network of peer Alpha Bank (AT:ACBr), its unit Postbank is now the fifth largest bank by assets and the only Greek-owned franchise there after the sale UBB by peer National Bank (AT:NBGr) and Piraeus Bank's (AT:BOPr) expected exit.

"If we find a good opportunity in Bulgaria we will look into it," Ioannou said. Profitable Postbank competes with big players Unicredit (MI:CRDI), Austria's Raiffeisen (VI:RBIV) and Societe Generale (PA:SOGN) in Bulgaria.

In Serbia, profitable unit Eurobank Beograd is the seventh largest among 31 banks in the country while fully-owned Eurobank Cyprus has grown to the island's third largest by deposits.