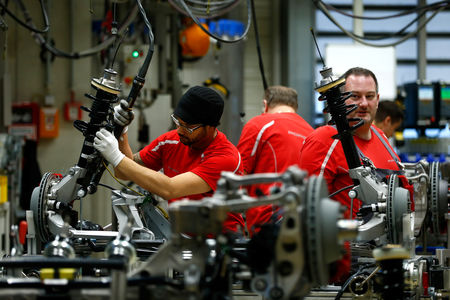 Investing.com - German businesses were more confident than expected in January, continuing the recent signs of a pick up in economic activity to start the year.

According to the Manufacturing Purchasing Managers Index released by IHS Markit, the January flash manufacturing PMI came in at 45.2, up from with 43.7 in December, and 44.5 expected. While this increase signaled an 11-month high, it's important the remember the sector is still deep in contraction territory.

The upturn in the PMI chimes with Tuesday's release of German economic expectations by the ZEW economic research institute said Tuesday, which improved strongly in January and reached their highest level since 2015.

Economic expectations rose in January to 26.7 points, its highest value since July 2015, from 10.7 points in December, the ZEW said. The outcome was much better than economists' consensus forecast of 15 points in The Wall Street Journal's survey.

ZEW President Achim Wambach at the time cited stronger than expected German economic growth in 2019 and the resolution of the trade dispute between the United States and China for the improvement.

The French release was mixed, with a small improvement in the manufacturing print to 51.0 in January from 50.4 in December, while the services sector, a more important sector for the French economy, dropped to 51.7, from 52.4 under the impact of strikes against President Emmanuel Macron's pension reform plans.

This dragged the composite print down to 51.5, from 52.0 prior, and suggests the French economy is going to struggle to post any significant growth any time soon.

The figures have only had la minor impact upon the European stock markets Friday, with traders more focused upon an easing of concerns about the impact of the deadly virus in Asia.