(Reuters) - French companies' 2019 results show how a series of strikes in protest at a pension reform, which paralysed the transport system, hit their revenue and led to costly disruptions.

Paris store sales saw a 30-50% sales drop in December, a month crucial to annual income, according to the French Federation of small retailers, while consumer confidence fell more sharply than expected.

Below is the list of companies that have commented on the impact of the unrest or quantified the effect.

Fourth-quarter like-for-like sales at its French hypermarkets fell 3.4%, "particularly impacted by the context of the December strikes", the retailer said. It did not provide a specific figure for the impact.

The strikes cost Casino about 80 million euros (£61.5 million) in lost revenue in December, leading the grocer to halve its 2019 French trading profit targets. Casino generates 53% of its revenue in France.

The commercial caterer's fiscal first-quarter revenue dropped by 1.9% organically in France and 1.8% overall due to a 9-million-euro hit from the December strikes. Excluding the impact of the unrest, the decline would have been 0.4% and 1.1% respectively, the company said.

The electrical retailer estimated that the strikes cost it around 70 million euros in lost revenue during the Christmas period. That compares with the 45-million-euro estimated hit in 2018 from the anti-government "yellow vests" strikes.

The French distributor of the Schott clothing brand reported a negative impact of 0.5 million euros on its fiscal nine-month revenue, which fell 7.9% to 16.3 million euros.

December footfall at the high-end department store chain dropped by 20%, with revenue down 8% year-on-year. The group said it did not expect the sales season to make up for the losses.

December traffic within France fell by 2.6%, while passenger numbers at Paris airport fell by 0.3% to 8.1 million, ADP (NASDAQ:ADP) said.

The Channel Tunnel operator said its full-year revenue took an 18-million-euro hit from Brexit and protests in France. The number of passengers who crossed the Channel last year fell 2% versus 2018 to 2.6 million, the company said.

Unibail-Westfield-Rodamco, which operates the Les Halles shopping centre and others in France, said the impact of the strike varied from one mall to the other, with only "a very limited number" affected.

A labour strike, also over the pension reform, has curbed electricity generation at three nuclear reactors operated by the state-controlled utility in France, and at two of its gas-fired generators. It led to a 6% reduction in the country's power generation by 0930 GMT on Monday, according to data from the company and from grid operator RTE.

EDF warned on Friday that it had received notice of a week-long strike at its power production sites. 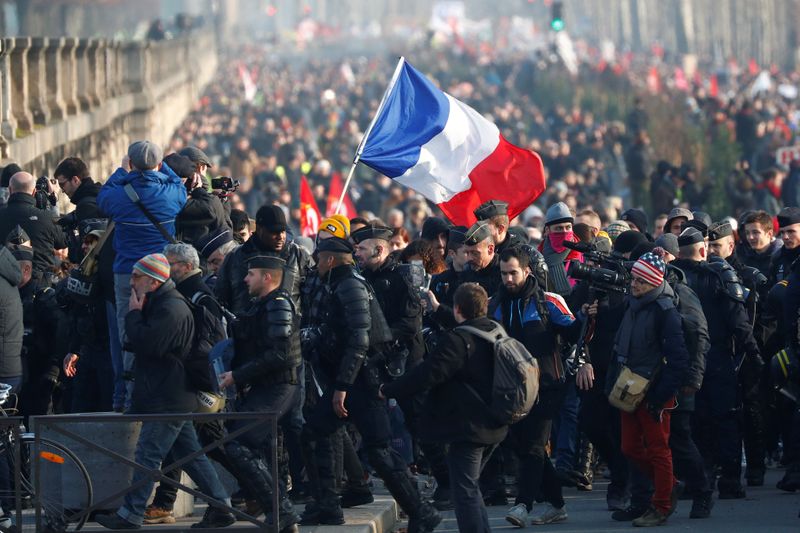