London stocks (FTSE) were among the biggest casualties in Europe, sliding 1.7%, with energy firms BP (L:BP) and Royal Dutch Shell (L:RDSa) down about 4% as oil prices plunged on worries about fuel demand.

After hovering in positive territory until afternoon trading, the broader European index lost ground and closed down 0.8% to hit a one-week low.

"Risk appetite is struggling as the coronavirus spread is still not under control in most parts of the world and as geopolitical tensions between China and the West intensify," said Edward Moya, a senior market analyst at Oanda.

A U.S. official told Reuters the Trump administration planned to finalise regulations that will bar the government from buying goods or services from any company that uses products from China's Huawei and others.

Technology stocks (SX8P) registered the only sector rise in Europe, up 0.9%, while banks (SX7P) and utilities (SX6P) fell nearly 2%.

Investors are also awaiting the onset of second-quarter earnings season, with analysts predicting companies listed on the STOXX 600 will record a near 54% drop in profits, according to Refinitiv data.

"We are in a position where companies can surprise positively versus expectations because the bar has come down quite sizeably for this year and activity has picked up substantially in the last two months," said Guy Miller, chief market strategist at Zurich Insurance Co.

"The question is what happens from here. The more challenging period will be when we get into the autumn months - if can we keep the pace of recovery up or have we just had a knee-jerk rebound."

Merck KGaA (DE:MRCG) and Roche (S:ROG) rose 1.7% and 0.7% respectively after Reuters reported the European Commission has struck deals with the drugmakers to secure supplies of experimental treatments for COVID-19. 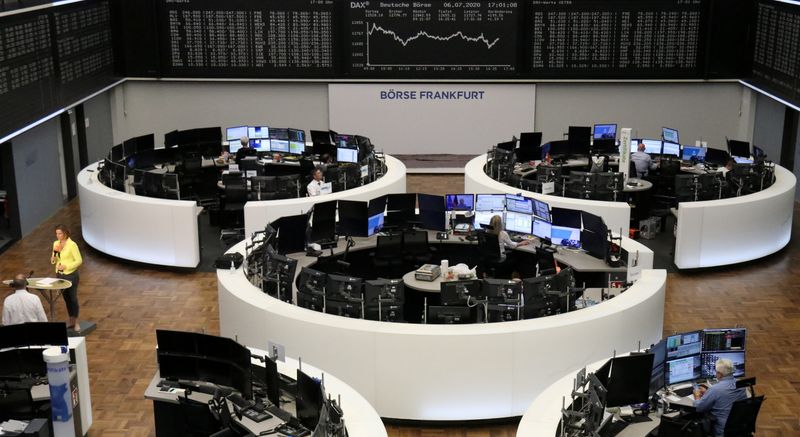